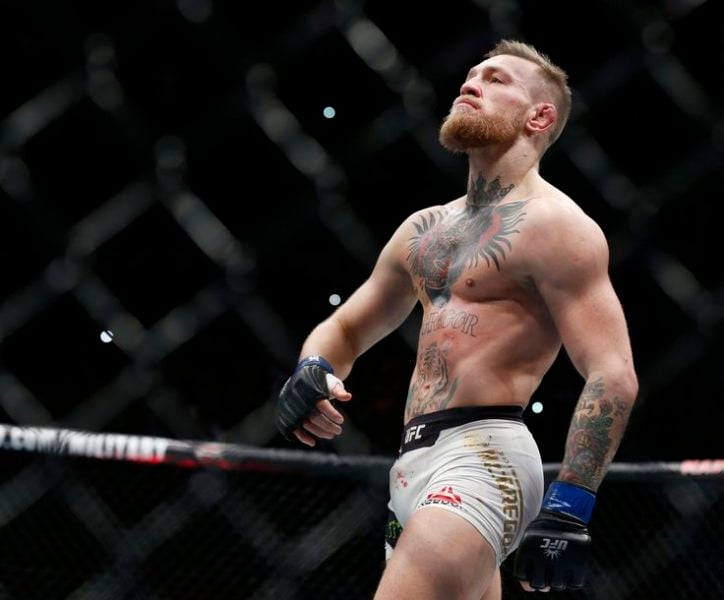 There may be no bigger name in all of sports today than Conor McGregor. The decorated mixed martial artist has transcended the sport, becoming an icon around the world. He has earned thousands of fans thanks to his trash talk, bravado, and undeniable fighting ability. Despite the majority of his life spent competing in MMA, he is set to take on the biggest boxing star in history in August, Floyd Mayweather.

McGregor, like any superstar athlete, has both fans and detractors. It is undeniable, however, that he creates a uniquely captivating spectacle with each fight. Despite millions tuning in to watch him perform, few know him other than the persona he takes on for fight promotions. In order to better appreciate who he is as a person, here are 20 of the most interesting facts about the iconic Conor McGregor.

Given the fact that he has won tens of millions of dollars, one might expect him to be surrounded by people hoping to share his wealth and spotlight. However, McGregor has stayed with the same group of friends and trainers since before he was a star. He keeps grounded by being loyal to those who cared about him before he was famous. Perhaps most importantly, McGregor has spoken about his loyalty to his coach, John Kavanagh. The two have worked together since McGregor’s pro debut.

It may be shocking for fans to learn that McGregor was often picked on when he was young. Long before becoming the most devastating knockout artist in the UFC, McGregor was often bullied. He was a small child and attracted a great deal of attention from bullies.

Luckily for his fans, it was bullying which drove McGregor to learn how to defend himself. He started taking up martial arts and boxing, and has never looked back. Today, he gives back by giving speeches at schools about his experiences with bullying.

18. He is an expert finisher

Thousands of fighters around the world dream of one day competing in the UFC. Just making it on the roster means that a fighter is world class. Becoming a champion in the UFC establishes a fighter as the best in the world at their weight. But consistently finishing world class fighters while becoming a world champion is another feat entirely.

McGregor currently has 21 career victories. Of these, he has finished 19 before the final bell. That means his finishing percentage is over 90%! Knocking out world class competition is one of the most important reasons for McGregor’s popularity.

17. He fights through injuries

Everyone knows that being a professional fighter takes a great deal of toughness. However, while every person who steps into the cage deserves respect for their courage, some are made tougher than others. In addition to his power, McGregor has incredible fortitude. When fighting current UFC Featherweight Champion Max Holloway, McGregor tore his ACL. Not only did he continue to fight, he won a unanimous decision by out-grappling his opponent.

16. He has drawn comparisons to Muhammad Ali

While Mayweather might disagree, most people feel that McGregor is the biggest name in combat sports today. As such, it is no surprise that he has been compared to icons from the past such as Muhammad Ali.

The two athletes do share quite a few characteristics. They both used trash talk to get inside their opponents’ heads, they both were able to predict the round in which they would finish their opponents, and they both rose above sports and became cultural icons. McGregor understands that Ali represented ideals that he does not, and he has stated that he feels honored just to be mentioned alongside such a great figure.

15. He has always had an obsession with fighting

With McGregor’s affinity for expensive cars, designer suits, and general luxury, one might assume that his mind is not focused on fighting. However, those who know him well understand that fighting has always been his first priority.

In the documentary The Notorious, McGregor explained that he has always been obsessed with fighting. He would wake in the early hours of the morning and practice kicks simply because he could not get his mind off training.

14. He fights at any weight

As discussed above, every fighter deserves respect for having the courage to put their health on the line and step into the cage. However, there are a select few fighters who also have the courage to transcend weight classes.

McGregor is one of these exceptional athletes. He does not care which weight class an opponent is in; if the fight is attractive, he’ll take it. He has fought everywhere from Featherweight to Welterweight in the UFC, a 25-pound range.

Given his unprecedented popularity, one might assume that McGregor would shy away from taking stances on controversial topics like gay marriage. However, he is not the type of person to stay silent when he believes something must be done. In fact, McGregor became one of the most famous Irish celebrities to be vocal in support of gay marriage. He said that at the end of the day, it comes down to the fact that we are all human and deserve respect.

12. He cannot be distracted from fighting

While McGregor is clearly obsessed with perfecting his craft, he is not the first world-famous fighter. Others who came before him have allowed their focus to shift when they receive offers to appear in high profile movies. One of the most notable cases is Ronda Rousey, whose fame arguably led to her downfall (although Holly Holm’s shin played an important role too).

With his devastating and seemingly effortless knockout of Eddie Alvarez, McGregor captured the UFC Lightweight Championship. This was a historic achievement, as he became the first UFC fighter to hold two championship titles in two weight classes at the same time (he was also the Featherweight Champ).

However, while this achievement was a first in the UFC, it was not a first for McGregor. He had already captured two world titles in one of Europe’s most competitive organizations, Cage Warriors.

10. He predicted his success

McGregor famously began accurately predicting the round in which he would finish his opponents. However, years before he became a UFC superstar, McGregor made one of his most impressive predictions.

A video promo captured a young Conor McGregor stating that he would one day become an undisputed UFC Champion. Despite being only five fights into his career at the time, he somehow had an accurate vision of his later career.

9. He has incredible self-belief

While it certainly takes confidence to predict becoming a world champion, there was little to lose if this prediction did not come true. However, McGregor’s self-belief is so strong that he has been willing to bet enormous sums of cash on himself to win fights.

The best illustration of this happened before his fight with Chad Mendes for the Interim UFC Featherweight Championship. He reportedly wanted to bet Dana White and Lorenzo Fertitta $3 million that he would knock Mendes out. Further, he was so confident that he bet he would finish Mendes in the second round. As followers of McGregor’s career know, that is exactly what he did.

Winning fights by knockout in the first round has become a career-defining trend for McGregor. However, some of his knockouts have been almost too fast to believe. Anyone who looked away while watching McGregor’s fight against Patrick Doherty in 2011 likely missed all the action. It took him only 4 seconds to land two devastating punches and knock his opponent out.

Casual fans might think that McGregor is nothing but a brash and arrogant athlete. Those who have followed his career more closely, however, understand that he uses trash talk to promote fights. He is actually a down-to-earth person who appreciates everything he has because he came from humble beginnings.

Long before reaching the pinnacle of MMA, McGregor was working as a plumber apprentice. He quickly realized that his passion for fighting was too strong to ignore and gave up the trade.

6. He is in a committed relationship

Conor’s commitment to his teammates and coach have earned him a great deal of respect from the martial arts community. However, what is arguably more important is his devotion to Dee Devlin, his long-time girlfriend.

The two have been together since 2008 and their relationship has stayed strong despite McGregor’s worldwide fame. Just this year, they welcomed their first child into the world, Conor Jack McGregor Jr.

5. He was an amateur boxing champion

Before he branched out into other martial arts like Karate and BJJ, McGregor was an incredibly successful amateur boxer. He even became the All-Ireland Champion as a youth boxer. He will certainly need to use every second of boxing experience he had in order to defeat Mayweather in August.

4. He was on welfare

With McGregor’s cars, clothes, and accessories, one might assume that doing MMA is a great way to get rich. While this is certainly true for established stars like McGregor, most fighters find themselves in dire straits at the outset of their careers.

This was true of McGregor as well. In fact, just before knocking out Marcus Brimage in his UFC debut, McGregor was forced to take a social welfare cheque. Going from the welfare line to a likely $100 million payday in a matter of years is an amazing and inspiring story which has earned McGregor fans around the world.

3. He holds many financial UFC records

McGregor is the face of the UFC not only because he is a lethal knockout artist, but also because he brings more viewers to fights than any athlete in the organization’s history. He is fond of saying that he holds “every record in the books,” and he is not far off.

2. He has the fastest win in UFC title history

When Ronda Rousey emerged as a star, she quickly earned a reputation as a ruthless finisher whose opponents rarely made it out of the first round. She set a record by submitting Cat Zingano only 14 seconds into their championship fight.

McGregor, however, has surpassed Rousey as the fastest finisher in a UFC title fight. He knocked out all-time great Jose Aldo in only 13 seconds to win the UFC Featherweight Championship.

1. His fight against Mayweather will be his first professional boxing match

McGregor’s fight against Mayweather is less like jumping in the deep end of the pool than it is being dropped in the middle of the Pacific Ocean. McGregor sports a professional boxing record of 0-0, while Mayweather is 49-0. In fact, Mayweather won his first world title ten years before McGregor made his pro debut in MMA.

The fact that McGregor is willing to step in the ring against one of the greatest boxers of all time in his professional debut speaks volumes about his courage and self-belief.