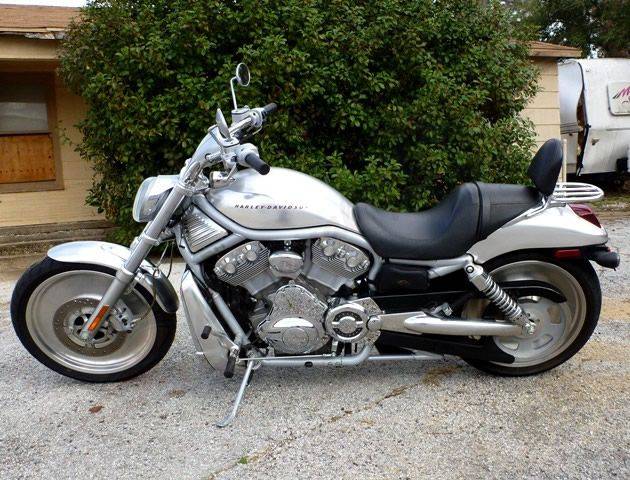 Revolutionary best describes the 2002 Harley Davidson VRSCA V-Rod; the term is definitive of the whole concept that inspired a whole breed of motorcycles – the Harley-Davidson V-twin series of bikes. For many years, rumors of the company building a high-tech Harley bike circulated the media. Double overhead cams? Liquid cooling? Four valves on every cylinder? Impossible. Yet regardless of the contradiction in certain design principles, the rumor was soon turned into reality.

Even though the V-Rod represents a different kind of machine in the Harley lineup, its inspiration is derived from an already established company tradition: success on the racetrack. For instance, the VR 1000 by Harley, which was first introduced into the racetrack in 1994, was powered by a double overhead cam, liquid cooled, sixty degrees V-twin engine just like the one found on the V-Rod.

Without any debate, particulars of the revolutionary Harley Davidson VRSCA V-Rod  are quite high-tech, yet remain strictly grounded in Harley Davidson tradition. A V-twin engine configuration was a guarantee, even though the overall spread between the four cylinders was enlarged from the former 45 degrees to a better smoother sixty degrees. Additionally, both rods have similar crankshaft designs; however, the crankshaft in the V-Rod is a stronger one-piece unit as opposed to the usual three-piece design used in previous Harley models.

In older models, the overhead valve layout gave way to efficient double overhead cams, which activated the four valves in every cylinder. An electronic sequential fuel injection port was used to feed the pistons, with the plug-top ignition coils providing the spark. The liquid cooling system  is another unprecedented departure from the Harley Davidson norms that promotes a consistent operating temperature, as the radiator mounted on the front carries beautiful scoops on the out edges to improve airflow.

An over square 3.94-inch bore and a 2.84-inch stroke results in a displacement of about 69 cubic inches or 1130 CC; it is, however, important to note that tradition Harley motors were under square in design. Nevertheless, the V-Rod releases a very impressive 115 horsepower at about 8250 rpm – more than all other street bikes produced by the company. The traditional triple or double row chain has been replaced by a gear primary drive to transfer enough power to the transmission through a clutch. The clutch is hydraulically actuated – making it the first in Harley Davidson history.

The Harley Davidson VRSCA V-Rod  seems likely to break new ground in other areas as well. While the low and long silhouette is surely not a departure in any way, the thirty-degree angle is steeper than that found in any other Harley and it can contribute to 67-inch wheelbase – this also is the greatest for any bike ever produced by the company.

A silver frame is used to wrap around the bike’s motor. The frame underlines the aluminum body panels as opposed to being hidden. The company applied a different kind of hydro forming process to produce the curves seen in the frame rails. Moreover, a low bolt-on section is used to hold the power train. A twin-filament headlamp is placed in an oval housing that extends into a pod-like panel carrying the tachometer, the fuel gauge, and the speedometer. Please note that the fuel tank is not a tank in any way; it is a cover that protects the intake system. The real tank is located under the seat so as to lower the center of gravity. At the back, a rear fender, like the one used on Deuce, covers a large 18-inch tire and a 19-inch tire on the front.

Solid rear and front wheels are only fitted to only two models made by Harley Davidson: the V-Rod and the Fat Boy, but they are of different designs. Whereas the Fat Boy has a three-piece look – the rims have been riveted to cast disc hubs – the ones fixed on the V-Rod appears to be turned from a block of aluminum. Four calipers are used to grip the rotors in the front and one in the rear. Even the people more familiar with the idea of a high-tech Harley Davidson bike were shocked by the design complexity of the VRSCA V-Rod. The V-Rod bike is evidence that as the company ushers in its second century in production, there are uncountable surprises left to be realized.

The V-Rod has been designed in a way that ensures rapid changes in direction are easy due to its low slung chassis. The bike, moreover, remains stable even over irregularities given its low center of gravity and long wheelbase. Additionally, this 2002 Harley Davidson VRSCA V-Rod prides in the best suspension characteristics of any cruiser bike. The machine is well balanced and it can keep things feeling a bit sporty without being too harsh. The upwards and downwards movement of each of the two wheels is well controlled as opposed to previous cruiser models where it was only softened. So how then should we classify the V-Rod? Cruisers are not as good handlers of irregularities as the V-Rod is, so it is not one of them. The Harley Davidson VRSCA is also not a sport bike even though it does a fair enough imitation of such bikes. The only classification left is best defined by the term “power cruiser” which journalists and bike manufacturers all over the world seem to use whenever they come across a bike they cannot really categorize with surety.

The Harley Davidson VRSCA is far from what bike enthusiasts every expected the company to manufacture, but we sure are glad they chose to explore new lands. The retail price for all these goodness lies at around seventeen thousand US dollars, and the company initially planned to produce about eleven thousand units. Certainly, the bikes are available in a wide array of different colors – that is as long as you understand that the phrase ‘wide array’ only means silver.