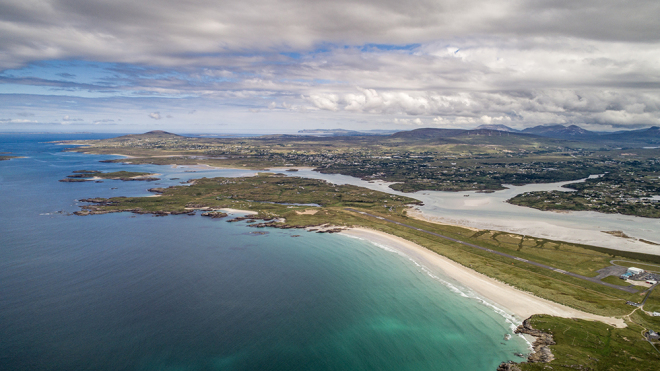 Airports are somewhere that people visit for practical purposes rather than for enjoyment. People only go to an airport as a means of traveling to another destination for either business or leisure, and they want to spend as little time as possible at the airport. However, each airport has its own benefits, whether this is amazing restaurants, an interesting architectural design, or comfortable lounges. There are also some that are set in nice surroundings and that are considered scenic. This can make takeoffs and landings far more enjoyable if you have some attractive sights to view. PrivateFly, a UK-based global charter broker, recently conducted a poll of 7,000 travelers to find the ten airports with the most truly stunning landing strips, and here are the results.

Just making the list in tenth position in the poll is Aosta Airport in Italy. The airport is located close to Mont Blanc, the Matterhorn, and the surrounding majestic mountains. As you descend onto the runway, it appears as if appears as if you are heading straight into the snow-capped mountain range. However, you simply land in a runway that runs along a picturesque valley.

London has some of the most famous landmarks in the world and arriving in London City Airport give you the chance to see some of these from a different perspective. Some of the sights include Big Ben and the London Eye. The scenery looks especially spectacular at sunrise and sunset.

If a cityscape is something that you admire, then there are few as pleasing to the eye as that of Toronto. On your approach to the airport, you will see Lake Ontario and enjoy views of the city’s harbor with the yachts and boats in all their splendour. The airport is right in the middle of the city, so you will descend over some of Toronto’s most famous landmarks including the CN Tower.

The approach to Queenstown Airport in New Zealand is nothing short of breathtaking.. The descent to the airport takes you through Gibston Valley, and you will fly over the beautiful Lake Wakatipu. Whichever way you look, you will experience impressive views.

Described as the Queen of the Caribbean, Saba is a beautiful island. Arriving by plane is the perfect way to admire the island’s beauty as you get a bird’s eye view. The greenery, the rock formations, and the colourful cottages are highlights of the scenery. An interesting fact is that this airport has the shortest commercial runway in the world.

The Netherlands Antilles is the only country with two entries on the poll results. The spectacular sea views are what make this such a scenic airport. In the surrounding area, there is the Azure Sea, neighboring islands, mountains, and beaches.

The waterways and the landmarks you pass over during takeoff and landing are probably two of the reasons people voted this airport as the fourth most scenic in the world. Not only do you pass over the Atlantic Ocean, the Indian River, and the Banana River, but you will also see the Cape Canaveral Air Force Station and Kennedy Space Center.

Of all the airports in France, those who took part in the poll believe that Nice is the best in terms of scenery. The airport is approached over the Mediterranean Sea and travellers can enjoy the picturesque backdrop of the southern Alps.

The unique runways are one of the main reasons that this quirky airport achieved second position. When planes land on the remote island of Barra, they do so onto sandy, cockle beaches and not the more typical tarmac runways. During takeoff and landing, passengers are lucky enough to have stunning views over to Skye.

Topping the poll is Donegal Airport, which is located along Ireland’s rugged coastline. The people who voted for this airport were impressed by the views of islands and sandy beaches on one side and Mount Errigal on the other.