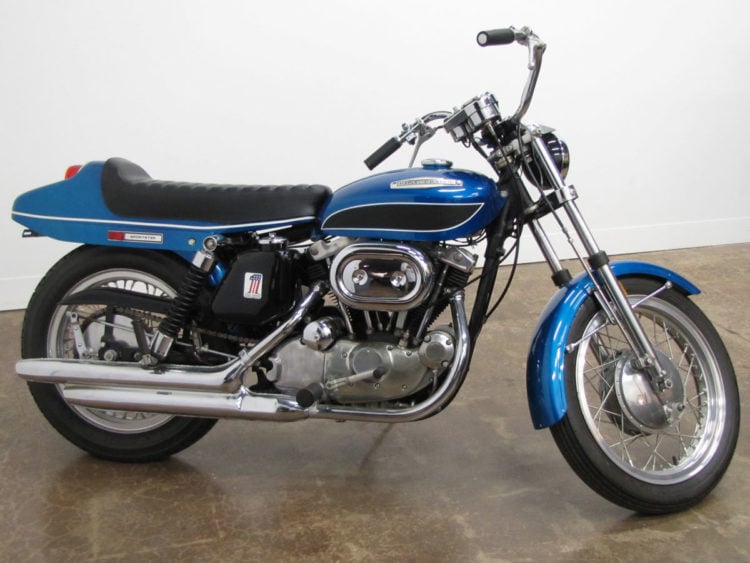 Harley Davidson’s Sportster model is a motorcycle that was first introduced by the brand in 1957. From this point forward, it would become one of the most versatile motorcycle lines. A range of variants within the Sportster family addressed the unique needs of most riders across the board. There were a lot of changes made by 1971, and although the Sportsters maintained the DNA of their ancestors it was clear to see that the model was evolving and doing so nicely. The 1971 Sportster is a line that bears a closer look and inspection to truly understand the significant impact that this model has had upon the brand as well as upon the motorcycle community overall.

A range of Sportster models in 1971

The XL Ironhead was produced from 1957 through 1985. The engine that was used in the 1971 model year was a two cylinder with two valves per cylinder, V-twin with cast iron cylinder heads vs aluminum, hence the name of the bike. The engine was offered in an 883 cc displacement as well as a 1,000 cc. The XL Ironhead still maintained the K series, although the series had ceased production, this element of the DNA remained. The aesthetics of this motorcycle were sleek and sexy and when compared with the XLH model, it had more of a cafe racer appearance with leaner lines and a sportier look.

The XLCH Ironhead Sportster was produced from 1958 through 1971. The significance of the 1971 model is that this would be its final year of production. They were also available in an 883 cc and a 1,000 cc engine size. This was a sportier edition of the XLH.

This variant was made between 1970 through 1971 featuring cast-iron heads for the 750 cc overhead valve engine.

Options for the 1971 Roadster

All versions of the Roadster for this model year came with optional packages. The boat tail rear fender was a popular style which appeared on the Super Glide and for an extra $60, buyers could have this added on as an option. The metallic red white and blue paint which was so popular at this time was also available. The 883 cc engines were mated with a 4 speed foot shift transmission with a points and coils ignition powered with a 12 volt battery.

By 1971, all of the Sportster editions were equipped with an electric starting system, sharing identical engine cases. There were pros and cons with the new starter as some of the old school Harley Fans didn’t trust the ignition and preferred the kick start over the electric start. Newcomers who were just getting their feet wet in riding, generally saw this as a welcome innovation that added convenience to the mix

The eighties would bring yet more of an evolution in the Sportster with the XR-100 model from 1983 through 1984 with its 1,000 cc street bike. The LS Roadster was produced from 1979 through 1982 with longer forks, highway pegs, a sissy bar and a 2.2 gallon fuel tank. The XL Evolution which was also called the Evo in a 1,100 cc and a 1,200 cc with alloy heads came on the scene in 1986. The 1971 900cc boat tail Sportster XLCH featured the boat tail design but was only made for a period of 2 years as the fiberglass tail was a bone of contention.

The significance of the 1971 Sportster

When we’re talking about the 1971 Sportster, we’re talking about a family of bikes which share the same DNA, but just like siblings are different, they offered riders a variety of features. Harley Davidson does one thing well, and that is to accommodate the desires of their loyals with new innovations and a forward progression towards perfection. Their design teams are constantly working to work out he kinks and to deliver the best possible performance and we see this pattern of behavior plainly exhibited when we review the history and evolution of the Sportster and all of its assorted models that fall within the category.

The Sportster is an iconic motorcycle in its own right as the first editions that rolled off of the production lines served multiple purposes. While modern designs have a tendency to focus upon specialty niches to appeal to a certain crowd, the 1971 models seemed capable of doing it all. These bikes were suitable when used as road bikes as an early form of the tourer, and they could tear up most types of race tracks and there were few complaints about their performance. The Sportster is an important piece of Harley Davidson’s history that shows a median point in the development of the brand and its persona if you will. Dedication to the satisfaction of a diverse group of riders is the recurrent theme that surfaces in the Sportster models as well as the other categories produced by HD. This family of motorcycles served as a pivotal point in the evolution of the Harley Davidson company with regards to the strong reputation that they’ve built through the decades. The 1971 Sportsters were not the ultimate, but rather give us a snapshot in time and it was a very good time for Harley as well as for the riders who appreciate the significance of the era.