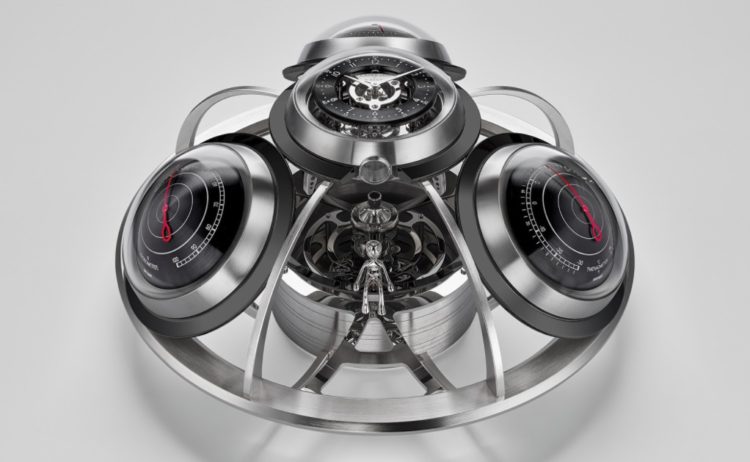 As the years have gone by, many industries have adapted and developed new and upcoming technology to further advance their merchandise to appeal to buyers and collectors everywhere; The same concept applies for the clock making and watch making industries. We have seen many different techniques and design adaptation take the forefront in recent years, and this same idea applies for the newly released MB&F Fifth Element clock that was created by the MB&F company, in collaboration with L’Epee 1839. This collaboration of the two companies has created some of the most clever and unique clocks and watches throughout the years, and the same goes for this Fifth Element clock, which is a clever collection of other features as well. We will talk about these features that make this clock stand out, along with other behind the scenes details, here in this article. With that said, let’s get started with our closer look as MB&F introduces the Fifth Element Clock.

The first thing that collectors will notice is the unique design of the Fifth Element clock. The clock itself takes the appearance of a flying saucer, and even features its own tiny alien ‘pilot’, to add to the finesse of the concept. The clock is constructed with brass and stainless steel, and consists of three different pod like features that each tell a different time or weather setting, as we will later discuss in the article. What is so unique about the design of this clock, aside from the UFO metaphor, is the fact that these individual pods that are featured as the focal point of the clock are also interchangeable, and can be moved according to your liking. Each pod also has its own set of legs that allow it to be a standalone piece that you can take wherever you need.

The design is taking one more step further with its creativity by including a mechanism that allows the pods, when stationed in their places on the clock itself, to rotate via a track that is located on the base of the station around the tiny alien figurine, as if he is controlling the movements themselves. For those following the watch making company throughout the years, you will notice that it also resembles that of the Alien Nation Wristwatch that was released prior. As we eluded to before, the MB&F Fifth Element Clock is not only a time keeper and clock, but also has a weather station aspect to it as well. Featuring a barometer, hygrometer, and thermometer, these individual measurements are found in their own pods that are set within the clock, as we also mentioned before. Each pod is also constructed with a shock protection system to keep it from accruing any damage when it is being carried independently from the clock mechanism itself.

In total, the MB&F Fifth Element clock measures to be about 15 inches by 8 inches, with those individual pods that are about 12.4 centimeters in diameter each. The clock is also being featured in three different coloration schemes — either silver, black, or blue; However, collectors and buyers who are interested in the clock will need to act quickly, as there are only 18 pieces of each color available for purchase, making it a very limited edition time piece.

With all of that said, it is clear that this MB&F Fifth Element clock is truly a one of a kind time piece that many will treasure for years to come. With its unique structural components, including the individual time keeping and weather station pods that can detach independently from the clock itself, and even down to the small alien pilot that is keeping watch of the ‘flying saucer’, there is no detail that has not been crafted to the finest degree. This has been our closer look at the MB&F Fifth Element Clock that has recently been released. You can find more information on this time piece and weather station, along with other pieces that the collaborative companies have created, via their website and other outlets on the web. You don’t want to miss out on any of their amazing and one of a kind pieces that will stand the test of time.