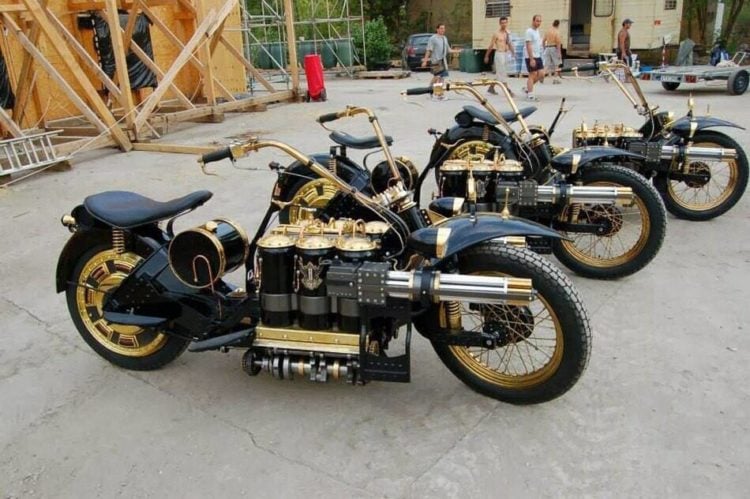 Motorcycles are always amazing, and very few exist that don’t turn a few heads when they rumble past. However, there’s a whole new genre of custom bikes that leave the competition in the aesthetic dirt. Steampunk motorcycles have begun popping up everywhere and we couldn’t be happier. These ten incredibly amazing looking steampunk motorcycles are everything wonderful about the past with futuristic technology to make them real. 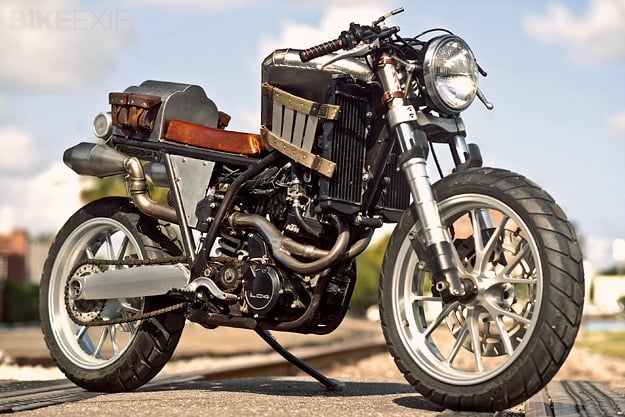 When it comes to rocking a fantasy steampunk look without going overboard, this bike is the top choice. If it rode past you in the night, you might think that the last cup of coffee wasn’t enough and you need to find a hotel. However, this machine is no dream. Originally this bike was originally a 2000 model KTM 640 Adventure, but those days are long gone. Now it has all-new adventures. Mace and his wife worked together to strip the fast and light bike down to bare bones so they could rebuild it in the image of a future that hasn’t happened (yet). Notably, the tail section of this breathtaking artwork was originally sculpted by Mace’s wife before the couple fiberglassed it. We weren’t able to find her name, but someone needs to give the lady a medal for this already! Or perhaps an art gallery would be more appropriate. 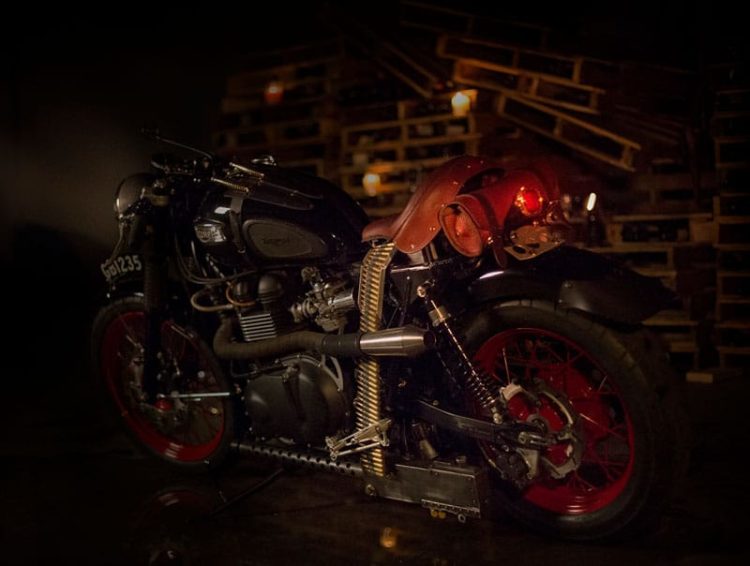 Originally a Triumph, this red and black steam machine is ready to fight in some strange futuristic war. The red-rimmed wheels hold a subtle and pleasing sense of menace. Meanwhile, a Tiffany and Co. timepiece from the 1920s fits the genre and the bike like they were made for each other. You can’t look at this bike without noting the two machine guns and ammo chains made from blanks. However, in all that glory you might not notice the English fighting daggers mounted on the fuel tank or the gun sight near the drivers’ arm. This machine rocks a punny name, but there’s nothing funny about it. 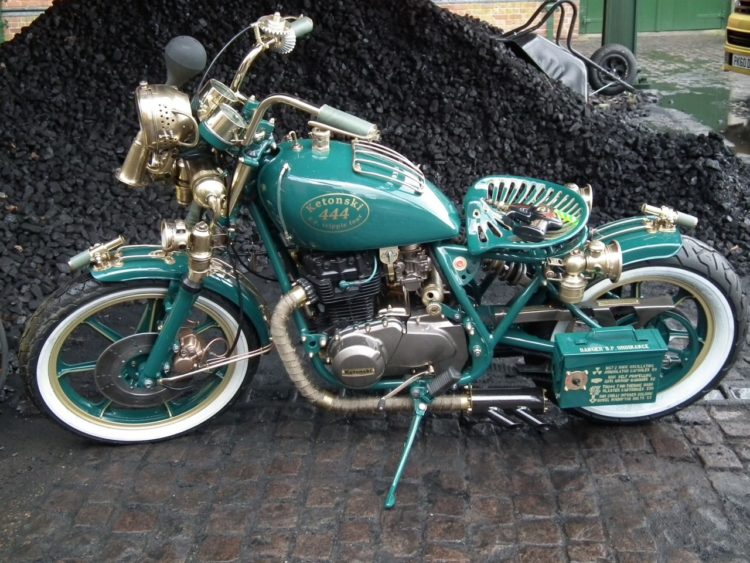 The fantasy world of Paul Keeton must be a rich place indeed to have dreamed up this motorcycle. Most of the parts that aren’t from the original bike are hand made. Paul welded, etched, and cut his well-earned place on this list. To top it off, this particular bike is one of the most exceptional color palates we’ve seen. Brass and brilliant emerald green make this the crown jewel of our list by a mile. 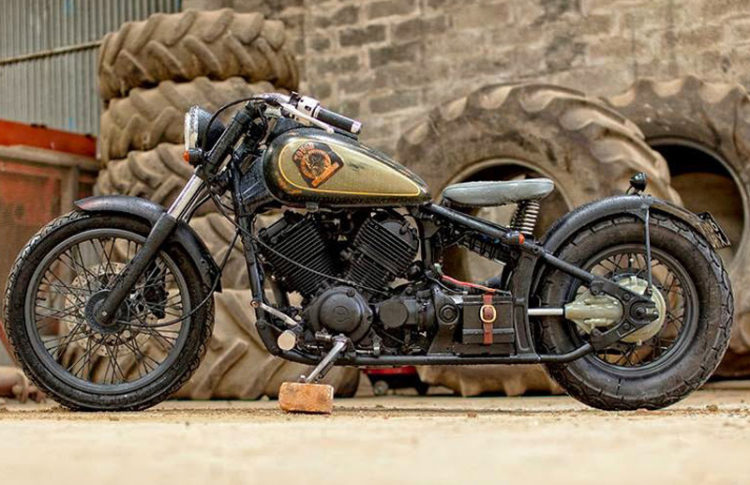 It seems like a crime to give any single bike in Dmitriy Tikhonenko’s collection a place without mentioning the rest. As steampunk custom motorbike makers go he is always near the top of our list. Literally, every bike he makes is pure steam magic. If we had to pick just one then it would have to be the elegantly understated Brat Style bike. However, we want to give an honorable mention to his beautiful brown Streetfighter as well. With a catalog of steampunk items for bikes, homes, and businesses, this spot on the list is all about the artist. 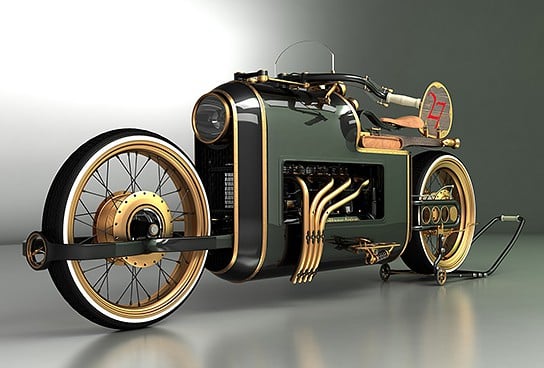 Steampunk is all about the future that never was because of the industrial revolution. However, some artists and bike customizers have a very different view of what that future would look like. Mikhail Smolyanov’s ARX-4 is one of those fantastic machines that shows you an alternate reality where anyone can ride down the road in this streamlined style. Taking his cues from race cars in the 1920’s that utilized airplane engines, this blocky side view is actually a superbly sleek machine capable of great speed. One glance and you can see those cars in this amazing modern descendant. 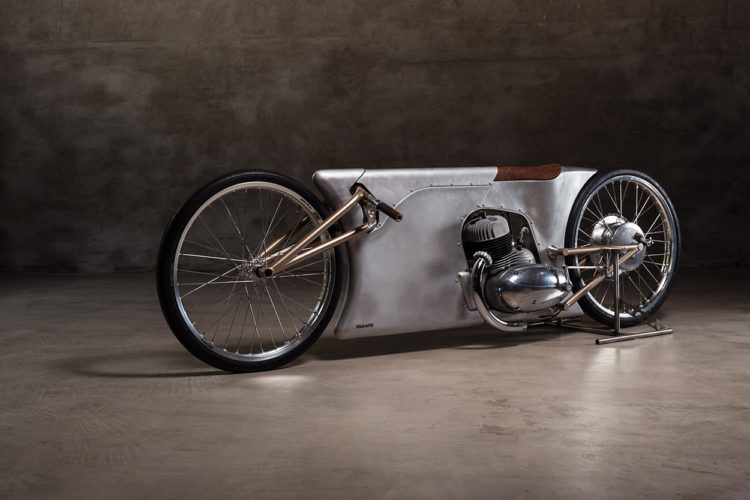 The makers of the Jawa Sprint must see a similar future to Mikhail Smolyanov, though not through the same lenses. Sporting a wafer-thin body with various metallic tones and glowing brown leather for the seat, it is truly a thing of power and grace. If we had to guess, Urban Motors saw a steam-future where Tron still happens, and this 90 kg bike reigns supreme in that virtual world. This is no road bike, but rather it was custom built for the Gelmsek 101. As a competition bike it was made for show, but we could see it tearing down the roads of futures past just as easily. Moreover, this is a fully functional motorcycle that runs, it’s just not street legal. 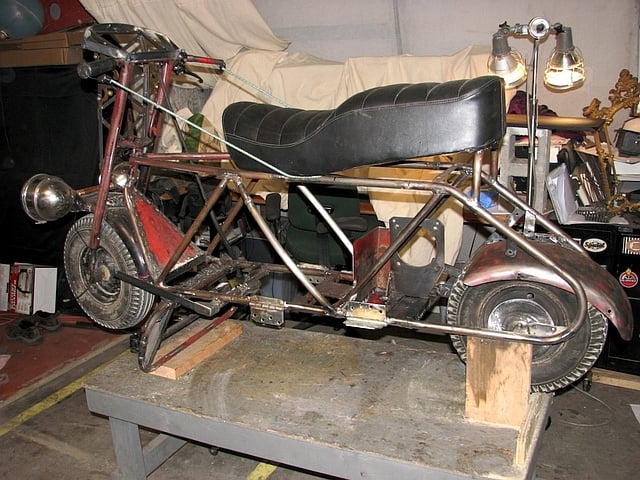 When Tom got his hands on this 1967 bike, he was already considering making it electric. When the upgrade bug hits, you never know quite how far it will take you and this gorgeous bike is the best example of that we’ve seen so far. Of course, back then it had no brakes, so there were other concerns to address as well. He custom-built a steam boiler on the back to create a steam-electric hybrid. While this bike is electrical the boiler makes some outstanding special effects possible. Of course, the whole bike is special anyhow and the wood-meets0bras sections are what truly draws the eye. 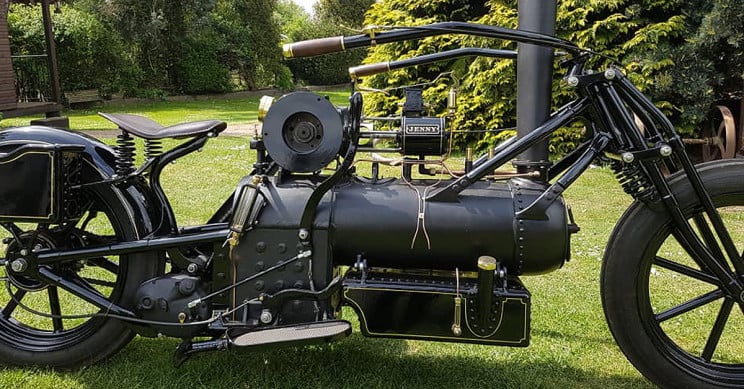 Any self-respecting list involving steampunk needs at least one coal-powered contraption. In this case, it’s a motorcycle built by one Mark Sanderson. It took Mr. Sanderson four years to finish this fantastic beast of a bike. He even made his own engine using some parts from a Petter diesel engine. The show-stopping steam bike might seem too hot to handle, but it runs just fine. The sleek black design sports just a few touches of exposed brass and wood handles. We’d expect nothing less from a top-three steampunk bike.

Honestly, this bike could have taken first place except that it wasn’t truly finished when we discovered it. Using compressed air is not only a stroke of genius but a superbly eco-friendly way to harness this much creativity for the powers of good. The cylinders are clear glass tubes with golden-colored fittings, and they draw the eye in a way few other machines ever could. Regrettably what puts this bike in second place is its run-time more than anything else. With only three minutes at most, you won’t get far on this bike, but it would be worth it just to sit on such a work of art and go a minute up the road. Doubtless, the technology will catch up with the idea soon enough and well see more of this air-bike. 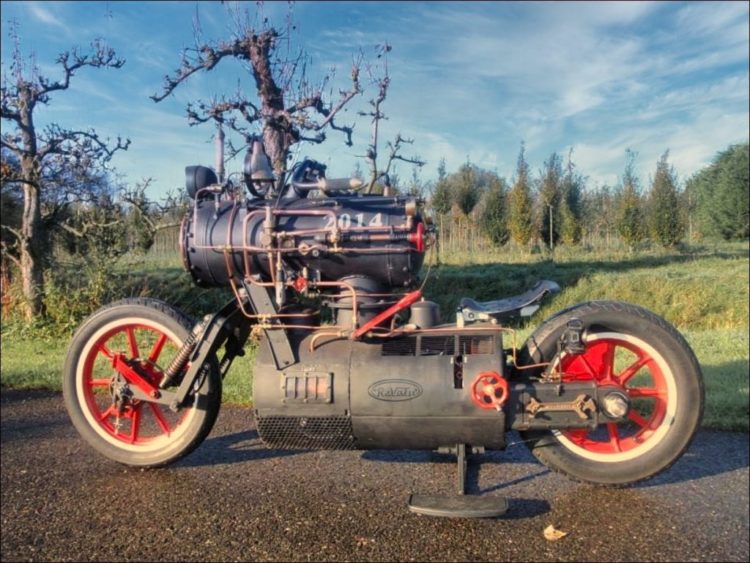 When you think of steam power, what comes to mind first. If your answer wasn’t airships and trains then you’re either overthinking it, or you need to do your homework on this subculture. This locomotive inspired bike looks like a train. However, it runs on air. Inspired by Colby Higgins’ Wreck Bike Train, this art meets function motorcycle truly deserves the gold medal in steampunk bikes. Moreover, it even has a steam whistle and train bell to bring the illusion screaming to life. Best of all, it will go more than three minutes, landing The Black Pearl firmly in the champion’s seat.

We don’t mind saying it. We’re jealous of these bikes. Everything about them from the thoughtfully wild details to the loving custom-built parts is wonderful. In a time when everything seems dark, these bikes are there to light up our world with a touch of whimsy and remind us that everything is possible if you dare to dream.