Home
Motorcycles
What Was Tom Cruise’s Motorcycle In the Film “Top Gun”?
Prev Article Next Article 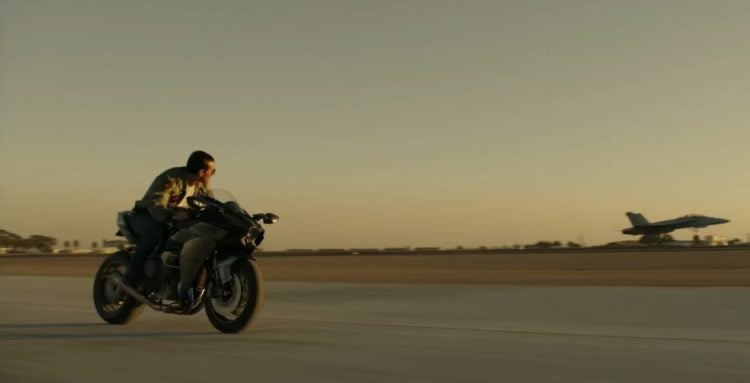 You remember the movie, don’t you? A cocky Navy fighter pilot played by Tom Cruise finds love with Kelly McGillis, an unlikely match who also happens to be one of his flight instructors. While the film, which was a big hit when it came out in 1986, mostly focused on the friendship between Cruise’s character and his best friend, Goose, as well as his rivalry with a fellow flight student, it also consisted of a romantic sub-plot which played plenty of romantic music while Cruise and McGillis either made love or rode on his motorcycle…remember that?

For the sake of this article, let’s put the rivalry and romance in this movie aside and focus on what was really important…that bike. Most of us can recall it; we recollect the way it made Cruise look more studly than his character should have been for his age, and the way it played a major roll in helping him get the girl. In fact, without that bike, he wouldn’t have been as arrogant as he was, and therefore there may have been no ‘Top Gun’ at all, if not for that two-wheeled wonder. But how many of us really know anything at all about that motorcycle other than what we saw in that flick? None of us, really.

Now the public is bracing itself for the release of ‘Top Gun 2: Maverick’. So, whether you saw the first or not, you should be scrambling to familiarize yourself with it quick if you plan to see the second installation. I know I’m going to want a refresher course if I’m going to even begin to act like the ‘Top Gun’ pro I think I am.

So, let’s check it out together, thereby getting the education all of us really want, even more that watching Cruise hit on and land a woman so completely out of his league. Let’s learn about that bike, shall we? Out of our own curiosity we decided to research all of this information and bring it to you, so the next time you tell someone about ‘Top Gun’ who hasn’t seen it, they’ll think it’s a cool movie about a really hot bike.

Let’s get started, shall we?

The Basic Question: What Kind of Bike Was It, Anyway?

Not to be gender-typical, but if you saw the movie in 1986, chances are you remember it. But what do you remember? Well, if you are a female, romantic side of that motorcycle stood out to you, when you bring the bike to mind. Did you ask yourself what Maverick was riding? Nah, you were too busy being jealous of Kelly McGillis. If you are male, however, chances are you were either wondering what he was riding or you already knew, and while McGillis was hot, she wasn’t as hot as that bike. If you don’t know, Cruise was wooing his love interest (and generally speeding around senselessly) on a Kawasaki GPZ900R, according to Financial Express, and it was one sexy piece of machinery, and perfect for someone as immature and reckless as Maverick the Navy pilot. Let’s take a closer look, shall we?

The fact is, this is a really cool model bike, by pretty much all accounts. But what made it so special that it entered the annals of history? Certainly not just the movie, or the actor who rode it…no, it was special for other reasons. First, this particular model is something of the granddaddy of the modern sports bike; in other words, many of the sport bikes we see today are in its evolutionary line. Sure, we can probably give the film credit for getting the bike off the ground popularity-wise; we’ll give credit where it’s due. While fast and cool, everything and everyone sometimes needs some kind of kick to get them started (get it?).

The Model’s Release and Some Specs

Kawasaki first released the bike in 1985, and it was affectionately referred to as the ‘GPZ’, and according to Hot Cars, it was the successor to the Kawasaki Z1. It used a 908cc inline-four engine with 16 valves, which was liquid cooled and able to get raunchy 9,800 rpms. For the mid-eighties these numbers were just about unheard of, and they definitely won over many a man’s heart. It’s steel frame rolled on a 16” front wheel, with an 18-incher in the back. There was an anti-dive fork on the chassis and boasted air suspension…could it be love?

Best of all, it was an aerodynamic beauty that wasn’t just visually appealing, it was a comfortable ride as well. In fact, it is said that the bike was completely enjoyable as a road bike, and long-distance rides were surprisingly achievable, another thing that you just didn’t get with bikes made for speed. But with a top speed of 155 mph, riding around like would be a tempting thought for anyone, even on a trip that was considered long-distance. Yes, for it’s time, this was one hell of a bike, and brought out the covetous hearts of many all around the world. We don’t think it should surprise anyone that it was chosen as Tom Cruise’s two-wheeled companion for the hit film. We’re also sure Kawasaki didn’t mind contributing…they likely saw the marketing potential here clearly.

Not quite. As we mentioned, Cruise can be seen in the release of ‘Top Gun: Maverick’ to theaters. Was the final motorcycle scene in the first movie to be the last we would see of Maverick’s motorized road dog? Sort of. Maybe he stores the classic brute in a filmland garage somewhere, but he will be tooling around on a state-of-the-art Kawasaki H2, which is pretty much a new and improved version for today. After all, Maverick really wasn’t the kind of guy to get stuck in the past, now was he? Nah. But with or without the original bike, fans of the original movie will likely enjoy the action, and definitely the speed scenes. ‘Top Gun’ was a pretty good flick for the times, and so was that bike. Some good things just cannot be duplicated.