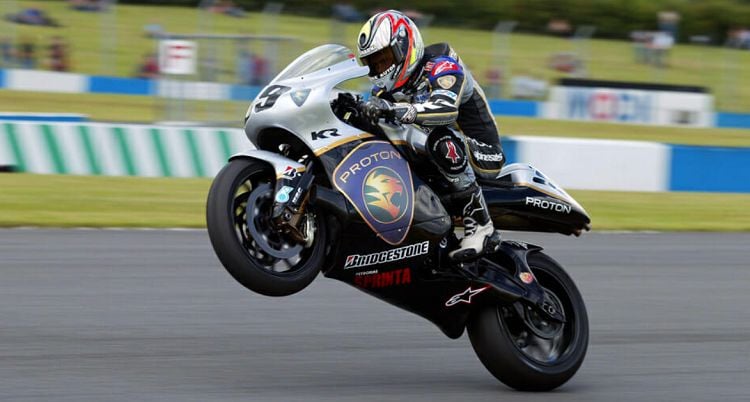 You adapt, or you die. Simple as that. The Darwinian Theory applies to organisms and almost all entities; organizations, corporations, and, in this case, a bike. The Darwinian Theory is a cruel one, to say the least; most often than not, we tend to fall or have fallen in love with the predecessor and the harbinger. The quintessence of this can be seen with The Proton KR3, a bike whose development and integration into the world of motor racing is a story of creativity, sheer will, innovation, and starting over again. It should come as no surprise then that when the bike was discontinued only a couple of years after being brought to corporality and replaced by more modern bikes, many people felt that it had more to offer, a feeling that echoes even today.

The story of the Proton KR3

The Proton KR3 is irreversibly interlinked with that of Kenny Roberts . In fact, many go far as to say that without Kenny Roberts, there would not have been a Proton KR3, and that is an irrefutable fact. Kenny is a renaissance man in many ways, albeit the fact that most of the art he has done has been in the sport itself. Having had an illustrious career as a driver, he decided to take on the onerous job of trying to dispose of the Japanese makers in the sport from the apogee. Everyone knows that this was as close to impossible as you could get, as did Kenny, but he still decided that he wanted to try at least and do so. Before he became a racing team owner, and after he had retired from the spot, he was the team manager got Yamaha.

After a couple of years, he decided to leave Yamaha and become a racing manufacturer of his right. As stated, this was not going to be an easy task. The first thing he had to do was find people, manufacturers, in particular, that would help him conceptualize a motorcycle and bring the concept to reality. He found this in the form of a Malaysian manufacturer, though the technology that the British used. It found inspiration from the three-cylinder Honda on which Freddie Spencer beat Kenny’s more dominant V4 Yamaha in 1983. Kenny understood that he had to acquiesce to the loss of speed when designing the bike, as he could compensate with braking and corner speed.

The team behind Proton’s design was led by the late Australian Warren Willing, who was the one that developed and designed the idea. However, it was race-car engineer Tom Walkinshaw and his TWR Company noticeable in the English “Formula One Belt,” who was accountable for the final design and manufacturing of the V3 engine.

The work on the engine and the bike, the Mk1 Modenas, started in 1996. When the engine made its debut in 1997, as you’d, and as the engineers expected, the development of the engine was baptized by fire; the public scrutiny. At some points in the racing calendar year, it proved to be a bit embarrassing because of the breakdowns and the teething troubles. That being said, the bike and its drivers, Jean-Michel Bayle and Kenny Junior, did put up a good fight against the heavyweights. Bayle qualified on the front row at Brno and was also able to achieve three eighth places, while Junior got two.

Many have said that the design features of the bike were a bit ahead of their time. In many ways, this is true, but at the time, it looks like a statement to try and justify the ill-advised adventures that were taken during design and manufacture. One of the main problems that the bike had was the vibrations it had during racing. Early on, the design team had decided that they would not need, and thus not have, a balance shaft. Ergo, the vibration levels of the bike were very high. Motocourse magazine said that the vibration from the bike was so severe that it frothed the coolant and the fuel, snapped footrest hangers, chafed through wiring, and all this caused component failure and subjected the riders as well as the bike to constant destruction test. The following year demanded a lot of change, and for change to take effect, there needed to be a lot of help. The said help came from the Japanese competitors because of Kenny’s friendship with them. They helped in designing and manufacturing the MK2, which, in all honestly, did not have a lot of upsides compared to its predecessors. However, the silver lining was that this was the basis of the Proton KR3 would be designed and eventually succeed.

Adding John McGee, a British Engineer, to the team proved to be a very prudent move. He was the one that designed a compact and well-balanced motorcycle, one which McWilliams described as the most beautiful bike that he had ever ridden. McWilliams stated that the bike was so easy to flick and steer and that you could put it wherever you wanted, and it would be able to produce and deliver power smoothly and seamlessly while also offering grip from the tires. Even though compared to the other bikes, it lacked a bit of speed through the straights, and it was more than capable of holding its own in the corners and braking.

It was announced in 2002 that the following year would not have any two-stroke engines; the KR3 was a two-stroke. Thus, the 2002 season was the season through which the bike could justify why it had been created and show the world that it could put up numbers and fight with the best. One particular race stands out; Philip Island. The track only has two slow corners, and neither of them leads onto straight. Therefore, the advantage that the bigger and more powerful bike had on the KR3 was offset. Proton was able to qualify in pole through McWilliams, and his teammate Aoki qualified third. This was a huge achievement, and the team hoped that the success in qualifying would translate to results the day after. That wasn’t the case. McWilliams was slow of the line, and while racing, he had trouble with his carbon brakes and runoff as Honda hairpin. Aoki didn’t have a good day either.