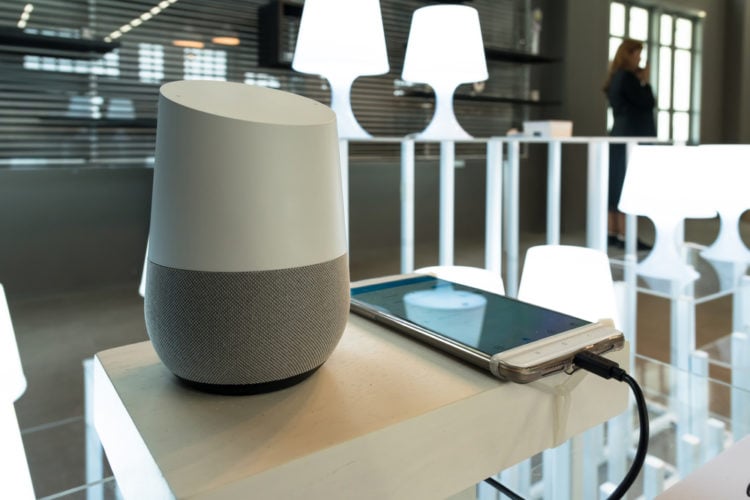 Audio-as-a-service companies are thriving in the new age of smart technology that allows for control of entire homes through voice recognition technology. There are multiple advanced technologies in use throughout the audio industry and new startups are discovering more ways to use this tech to enhance our lives. If you’re considering an investment in this segment of the tech world we have a few companies for you to check out. These are the top produces in audio-as-a-service tech that shows promise for staying in the game for decades to come. Here are five companies that are leading the way in the industry.

Google is responsible for its Google Assistant technology that is used to power thousands of smart devices throughout the world. The company is currently exploring ways to use artificial intelligence technology to improve the accuracy of its audio-as-a-service offerings and products. It’s looking at the language capabilities to enhance accuracy in this sphere. The Google Assistant currently has the capacity for 30 different languages. It can also understand speakers who converse in more than one language at the same time. This is an advanced technology, but the company is not yet satisfied that it has reached its full potential. The competition with Apple and Amazon Alexa is intense and it’s creating a high-stakes game with the necessity for pulling out all the stops to create the best possible product with fewer errors and glitches. Google has surged ahead in the integration of its smartphone interface, but there is a need to continue working towards making a more seamless interface between car, office, and home use of the technology. A renewed interest in increasing accuracy in task and search requests across multiple formats is a current goal.

Novel Effect is an audio tech company that utilizes voice recognition technology for adding sounds and music to book reading services. The outstanding technology it offers allows users to enhance printed and ebooks with over 150 audio soundscapes at no charge. This conversational speech technology is a part of a rapid growth niche within the audio-as-a-service industry used by the likes of Microsoft, Amazon, and other big players. The prospects of the Novel Effect startup are encouraging after the Seattle-based startup made an appearance on Shark Tank, as well as winning a Webby Award. Notable investors are taking notice of the tech company because of its high potential to advance to big player status shortly. Novel Effect was successful in capturing the attention of some large venture capital firms including Mavereo, McCune Capital, Lux Capital, Waverly Capital, Alpha Edison, TenOneTen, and several others in a Series A round of funding. The company secured a $3 investment to further expand its storytelling voice-enabled platform. Amazon contributed $100 million from its Alexa fund in support of its expansion.

Sensible Object is a startup that was launched in London, England. It’s a small startup that focuses on the development of a physical board game that features a well-known host. Amazon’s Alexa takes the center stage interacting with players as they ask her questions. She provides the answers. Sensible Object has produced the first-ever board game to feature the Alexa voice platform. It’s a voice-based interaction company that has caught the attention of Amazon for investment to move forward with the production and marketing of the game. This is a small company with 25 employees serving as developers for the Voice Originals game. It has the potential to become one of the newest trends in entertainment through advanced voice technologies.

If you’ve ever wondered where Amazon Alexa was created you need to look no further than Amazon Alexa’s Lab 126. The research and development team is headquartered in San Francisco’s Bay area. They specialize in designing convenience devices and electronics that use voice recognition technology for a variety of modern conveniences. They developed the technology that powers Kindle e-readers, Amazon Echo, Fire tablets, and many other consumer electronics. Amazon Lab 126 functions as a subsidiary company under the larger parent company of Amazon. The skilled and talented team of innovative engineers and developers have made some of the biggest contributions to the success of Amazon’s high tech audio projects.

Aflorithmic Labs is an audio technology startup that is based in London, England. The company has been in business for two years. Its main focus is on the development of scalable and fully automated audio production utilizing synthetic media that is driven by artificial intelligence technology. the technology uses voice cloning and audio mastering technology for use in smart speakers, mobile apps, and websites. The overarching goal of Aflorithmic is to produce engaging audio experiences that are ultra-personalized with ethical voice cloning and voice synthesis. The company also has offices in Barcelona, Spain. Australian-based Crowd Media Holdings took an interest in Aflorithmic as an investment opportunity and provided seed funding for $1.3 million with a ten percent stake in the company as its requirement for the backing. A press release confirmed that the investor has the desire to see the technology used to create a platform for FaceTime conversations that feature voice cloning technology that is the best in its class. Aflorithmic uses a variety of technologies including machine learning, artificial intelligence, and speech recognition along with SaaS and personalization of audio technology. The company was founded in February of 2019 by co-founders Timo Kunz, Peadar Coyle, and Bjorn Uhss. Aflorithmic Labs is a company in the audio-as-a-service industry to keep your eye on. It has tremendous potential to deliver unique new audio technology that could serve as a disruptor and a game-changer in the audio industry. It’s currently a private for-profit company without stock market affiliations, but this could change in the future.