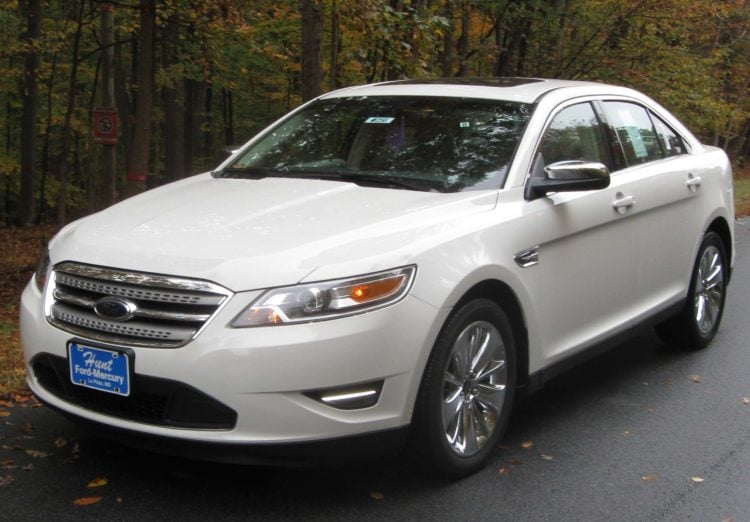 In 1986 the Ford Motor Company introduced the model named ‘Taurus’. Initially a four-door sedan, the Taurus also came in the station wagon version. Brought to the public in the last half of 1985 for the following model year, the Taurus consisted of a total of six-generations over the course of nearly 35 years. A full-sized car, it was sold along with the Mercury version, the Sable. The Taurus also offered the SHO version, which gave the public four generations over 20 years (from ’89 through 2019), and it also claimed to have been the foundation for the very first Lincoln Continental to offer front-wheel-drive (produced from 1988 through 1992).

When the first Taurus was released, it seemed to be something of a landmark model for the Ford company, as well as for the industry itself. It was the first design by Ford that featured the use of statistical process control in its manufacture, which was the brainchild of statistician W. Edwards Deming. Used by Ford for consulting purposes, Deming worked closely with the company to spark a ‘culture of quality’ to the company and its product. The Taurus’ design was extremely impressionable for this purpose, in turn influencing the arrival and use of many innovative new features to a large variety of automobiles in the market.

While it was discontinued in 2006 for the 2007 model year, but it quickly returned when Ford changed their Freestyle model into the Taurus X and released it at the 2007 Chicago Auto Show and promised to release it in 2010. A much more advanced version was brought to the public in 2013, and the sixth-generation Taurus, came out hand-in-hand with the new, updated Taurus SHO. While the first years of the model, from ’86 to ’07, were actually mid-sized cars; they were made larger beginning in 2008. They have always been a four-door sedan, with the exception of the five-door station wagon, which was discontinued in 2005. While the Taurus was, at one time, one of the world’s best selling automobiles, it has also seen a decline in sales over the years, resulting in its temporary discontinuance in ’06, but overall, it is still an extremely popular high-seller today. As of this year, the Taurus is still in production.

So, what are the best model years of the Taurus? Why were those years’ models considered the best? If you are a fan of the Taurus, these questions have likely entered your mind. So if you aren’t already aware, here is the info you are looking for. Below are the ten most popular, or shall we say ‘best’ Ford Taurus models of all time, listed from least best to very best, numbered 10 to 1.We’ll do the best job we can breaking it down for you and answering your questions, so read on for the 10 best Ford Taurus models ever: 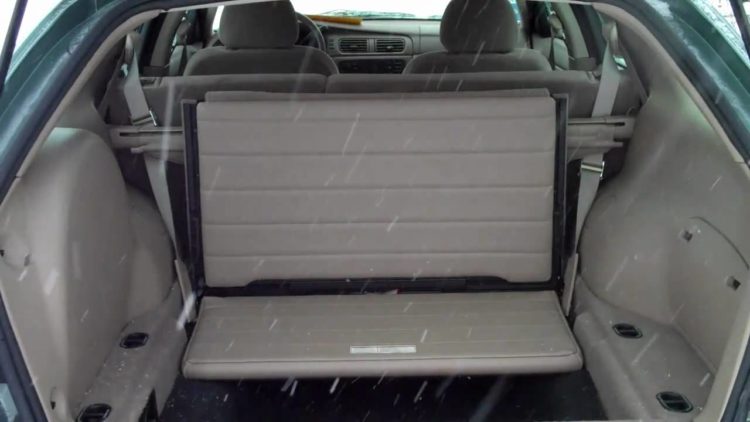 The 2005 SEL Wagon had an original MSRP of $23,545 for the standard version. It came equipped with 3.0 liter V6 engine and a four-speed automatic transmission (featuring overdrive). This particular engine gave 153 horsepower, and it had a torque of 186. The front-wheel-drive wagon pulled in 20mpg in the city and 27mpg on the highway, which was good for a vehicle of its size. The price was too, and families loved the car for all of the above reasons. 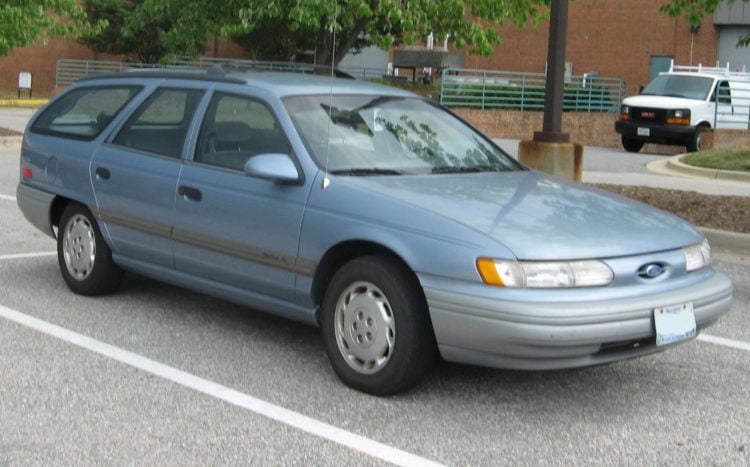 With an MSRP of $17,320 when it came out (standard), the Ford Taurus GL Wagon had a couple of different things it could boast. Besides the super-affordable price, it also offered a gas mileage of 18/city and 27/highway, which is also something that is greatly appreciated by consumers. Its V6 engine gave 140 hp, with a torque of 165 ft.-lb. Today, this particular year and model would cost a buyer between $800 and $2,400, when buying used and depending on fair market value. Another popular wagon, families loved this years model in its day, as well. The Limited version was the one that had the most luxury and added safety features in 2008, and those options carried a price tag of $27,620, just about $4k more than the regular SEL. While the basic output and performance offerings were the same on both cars (3.5 liter V6 with 245 torque, 260 hp, and mileage at 18/28 city/highway), it came with leather seats that were heated in the front, wood interior trip on the dash and doors, a lighted trunk, more cubby holes, better headrests all around, and many more safety features. The standard SEL and the SEL AWD had the basics on pretty much everything. The Limited made #8 for the simple fact that it was more comfortable, and made one feel a bit safer, than its sisters. This was a bit of a downtime for Ford, which is also reflected in the fact that it made 8th on this list. At $15,280, the ’92 Taurus GL Sedan was a great bargain for anyone who wanted to buy new and drive a dependable car without going broke. The 3.0 liter V6 gave out a consistent 160 lb-ft torque and an even more consistent 139 hp. Drivers could expect the combined mileage to run about 23mpg, which was more than fair, and they had a nice, comfortable ride from the inside, with plenty of room thanks to the Taurus’ spacious design. While not a wagon, this was a vehicle that families often chose due to its having four door and being roomy, making for easy travel when the young ones were along. Today, of course, you’d pay far less for this year’s model, but $15k was more than affordable, even by 1992’s standards. 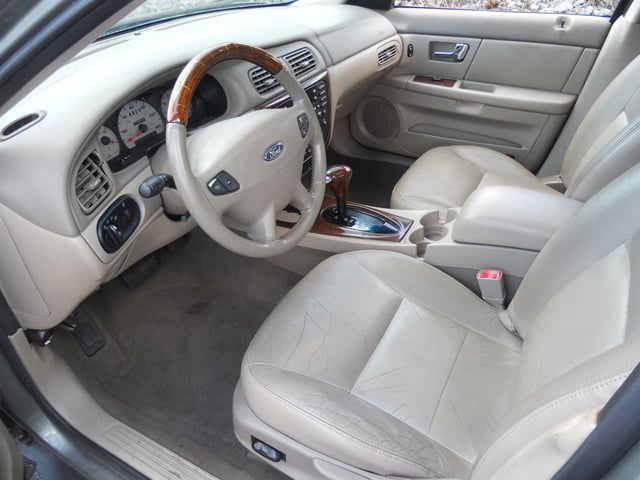 The window sticker price for this model year was $23, 630, and the SEL Deluxe came with many more featured that came standard than others in its family. Mileage-wise it got an easy 19mpg in the city and 26mpg on the highway, which wasn’t bad (though the Taurus wagon had been known for better), and 3.0 liter V6 pulled off 155hp and gave 185 lb-ft of torque…plenty of power for its purpose. Large, roomy, and comfortable, it was a station wagon that was very likely designed with the family unit in mind, especially when considering all the extras that it came with. And the price, once again, was more affordable than ever. At $23, 210, the SEL Sedan that Ford offered in 2007 was another in a long line of affordable 4-door vehicles. The SEL had the same size engine as its predecessors, and it still featured the four-speed automatic transmission that was typical. Providing drivers with a combined mileage of 23mpg had become the norm, and this was they type of thing that caused the Taurus to remain a top seller for so long, with 2007 being no exception. Not a bad year for Ford, even though they were experiencing a slight slump at the time. The 2012 was a Taurus model year that had a bit classier look that most of the years before it, and it worked for the company. Its 18/city, 28/highway mpg rating was a surprise, especially when one considered the 263 horses available to drivers from the 3.5 liter V6. It was also the year that Ford began offering their ‘Ginger Ale Metallic’ color to their lineup, and it proved to be a very popular hue for the company indeed. When considering that the ’12 Taurus sedan had a more luxurious body style and offered interior, but only ran consumers around $33,000 for the SHO edition, which is our choice, and was the high-performance version for that year. The SHO offered 365hp out of its Ecoboost V6, which made it a big seller for the first time in a while. It made #4 due to all of the extras it had, its high-performance capabilities, and its affordable price while featuring all of the above. 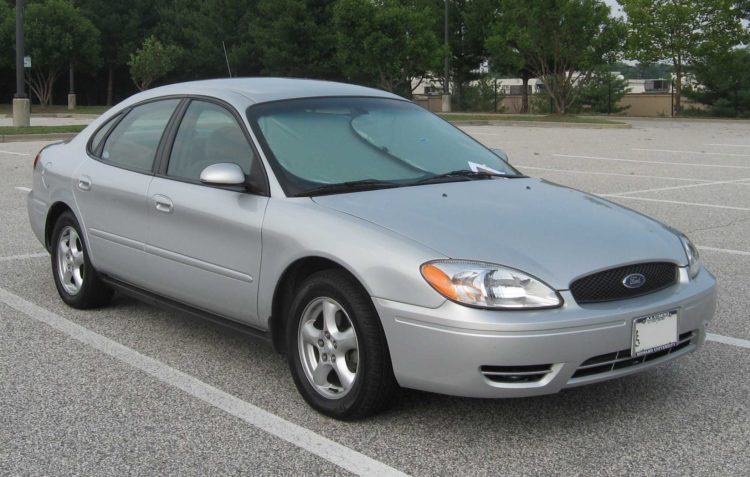 The 2003 SEL ran only about $23k when it was new, and the SEL was the most-equipped version offered, so the price was right. Today’s fair market value runs at approximately $2k, which tells us just how many years has actually passed. A mileage of 20/city and 28/highway made the offer seem even better, as did the 155 hp that the 3.0 liter V6 provided. It was considered a safety ‘First Pick’, so families loved the idea, and it was comfortable to both drive and ride in. Since it has such a low fair market value for such a good car ( if the used one you are considering is good), it comes in easily at #3. While this particular model year may seem primitive to us today, this was one heck of a family sedan when it came out, and that at an incredibly affordable price: only $19.5k for the best version, the LX. The GL and L versions ran considerably less. With that being said, it had 3.0 liter V6 that it was known for, and provided a combined mileage of 23mpg. Since the wagon versions of the Taurus remained popular with the family, we don’t need to point out that was the case here as well, and it was also loved by the same group for its safety standards, which Ford provided well for. This was a great-selling year for the company, which brings the 1992 in at #2 on the list. With a super-classy look keeping a high-performance sedan together, Ford managed to make #1 with their 2015 SHO sedan. The car had a starting MSRP of over $40k, but it was pretty much loaded, and that’s not to mention its 6-speed shiftable automatic and the V6 engine that provided drivers with 365hp and 350 lb-ft of torque. It also gave drivers a 17/25 gas mileage (city/highway), which is always an incentive to buy. We chose the 2015 model year because it not only had excellent performance ratings, but it just oozed class thanks to the SHO trim that seems to have come so far from generation to generation. Yep, it’s a shoe-in for us.

While the layperson may think a list like this is silly due to the fact that each model year seems to be exactly the same, they are wrong. Each year provided drivers with small improvements that contributed to the look, handling, and performance with each model’s release. Yes, they appeared to be the same, and yes, they had the same engine size, approximate mileage, and yada, yada, yada. But anyone who has driven more than one model year of the Taurus can attest to the differences, differences that are only obvious to the one behind the wheel. Ford managed to take a particular model and turn it into one of the all-time best-selling automobiles for years running. That is no small feat, and there is a reason for it: The Ford Taurus was a quality vehicle that was available for a good price. We owe a lot to the Taurus, because it was a model that shaped an industry.