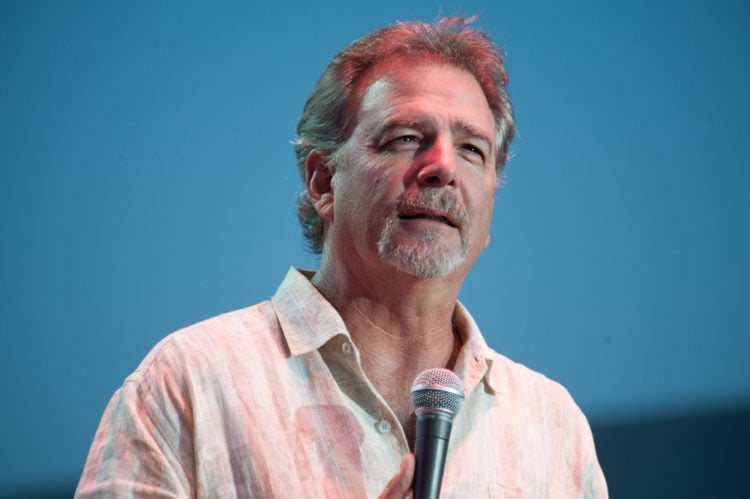 Bill Engvall is a comedian, game show host, and actor who began his career in entertainment in 1988. He is best known for his work as a standup comedian and for his signature line, “Here’s your sign.” Engvall is also known as a member of the Blue Collar Comedy Group. His career success means he is now a wealthy man, and it is estimated that Bill Engvall’s net worth is $40 million. Here is an overview of how he accrued his wealth.

Bill Engvall was born in Galveston, Texas, on July 27, 1957. He was a student at Richardson High School before attending Southwestern University. His intention was to earn a bachelor’s degree and then pursue a career as a teacher. However, he left before graduating.

After leaving college, Engvall worked in various jobs, including as a tour guide at Inner Space Caverns. Another of his roles was working as a DJ in a nightclub in Texas. It was while he was working as a DJ that he first tried to become a standup comedian. He would often perform his routines at open-mic nights in Dallas. Engvall moved to Southern California in 1990 to pursue a full-time career as a comedian. He first came to the public’s attention when he co-hosted ‘A Pair of Jokers’ with Rosie O’Donnell. Some of his other early appearances include ‘The Golden Palace,’ ‘An Evening at the Improv,’ ‘the Tonight Show,’ and the ‘Late Show with David Letterman.’

His breakthrough came in 1992 when he won the Best Male Standup at the American Comedy Awards. It led to him being cast as a series regular in ‘Delta.’ Unfortunately, the series was canceled after just one season, so Engvall began touring the comedy circuit again. He also continued to appear on television occasionally. In 1996, Engvall got his next regular television role when he was cast in ‘The Jeff Foxworthy Show.’ Engvall also released his first comedy album ‘Here’s Your Sign,’ in the same year, and this was certified platinum. He has since released a further eight comedy albums and several singles, some of which were from the albums and some that he released separately. Bill Engvall has completed six Blue Collar Comedy Tours, the first of which was in 2000. Some of the others who starred in the torus were Larry the Cable Guy and Ron White. The success of the tours led to a satellite radio show and three films. They also spawned the television series ‘Blue Collar TV’, which was aired on The WB Network.

His career as a Game Show Host and Actor

In addition to his work as a standup comedian, Bill Engvall is also known for being a game show host. He took over the role of hosting the popular game show ‘Lingo’ in 2011. Engvall was motivated to take on this role after seeing how much fun his friend Jeff Foxworthy was having hosting ‘Are You Smarter Than a 5th Grader?’ The comedian has also appeared as a guest or contestant on multiple game shows, quizzes, and competitions. These include three episodes of ‘Celebrity Name Game’ and an episode of ‘Hell’s Kitchen.’

Bill Engvall is also an actor who has appeared in multiple television series and films. He was the host of ‘Country Fried Home Videos’ from 2006 to 2009, and his own series, ‘The Bill Engvall Show,’ ran from 2007 to 2009. Some other series in which Bill Engvall has appeared include ‘Delta Farce,’ ‘Country Fried Planet,’ ‘All’s Faire in Love,’ ‘Leverage,’ ‘Hawthorne,’ ‘Bounty Hunters,’ ‘Catching Faith,’ ‘The Neighbor,’ ‘Wish for Christmas,’ and ‘Mr. Invincible.’ Most recently, Engvall has played Reverend Paul in eight episodes of ‘Last Man Standing’ between 2016 and 2021. Engvall has had roles in several television movies. His first role was playing Frank McDowell in the 2012 film ‘Kiss Me at the Lake.’ He then played Dale in the 2014 television movie ‘Do It Yourself.’ In 2015, he was Gary Martin Hays in the TV movie ‘Sharknado 3: Oh Hell No!’

Although he is best known for his work as a comedian and game show host, Bill Engvall has also been involved in various other ventures. For example, he was a contestant on the 17th season of the dancing competition series ‘Dancing with the Stars’ in 2013. He was partnered with professional dancer Emma Slater. Despite the judges giving Engvall and Slater low scores each week, they were a popular couple with a huge fanbase. Therefore, the public votes saved them for many weeks. They made it to the finals and eventually finished the competition in fourth place. Another of Bill Engvall’s ventures outside his career as a comedian is writing and maintaining the blog for the Los Angeles Angels, which appears on the Fox Sports West website. Furthermore, he is also a published author, as his book ‘Just a Guy: Notes from a Blue Collar Life’ was published in 2007.

According to Taddlr, Bill Engvall’s net worth is now $40 million. He has made most of his money as a standup comedian, including tours, television work, and releasing comedy albums. Engvall has also made money as a game show host, an actor, a blogger, and a reality television personality. Bill Engvall continues to work in entertainment, so it is likely that he will continue to make money as both a comedian and an actor and from any other ventures in which he is involved.

Bill Engvall has been married to Gail since December 1982. Together, they have a daughter called Emily, born in 1986, and a son called Travis, born in 1991. The comedian often mentions his wife and two children in his routines. Engvall lives with his wife in Utah when he is not on tour.