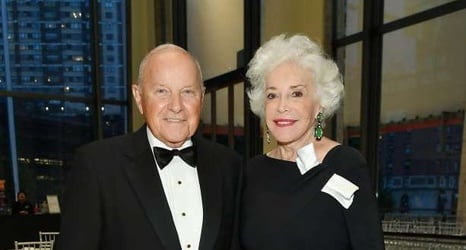 It’s difficult to be a billionaire today and not be in the public eye. Many billionaires invest in profitable pop culture ventures such as music, film, and sports. Charles B. Johnson is the prime example of a billionaire businessman that put his riches into the sports industry. Being the principal owner of the San Francisco Giants is no little thing, and Johnson surely knew what he was putting his money into. Charles B. Johnson has surely led a fruitful and fulfilling life, and there are many things about this billionaire that we all should know. Here are 10 things about Charles Johnson to get you acquainted.

This 86-year old billionaire was born on January 6, 1933 in Montclair, New Jersey. Charles was one among four siblings. His parents divorced when he was still little, and he ended up living with his mother along with his siblings. However, his father kept a relationship going. Charles would gain two stepsiblings from his father’s second marriage, one of which is Rupert Johnson Jr. Rupert would become Charles’ partner later on in his career.

After graduating from Montclair High School, Charles would go on to attend Yale University in 1950. He was an athlete in college, as he played offensive guard for Yale’s football team—the Bulldogs. His time at Yale would prove exactly how hardworking Charles was. Even with school load and football, Charles still managed to wait dining hall tables given that he was a scholarship student. The Yale Club of Montclair awarded him the scholarship, but it required him to keep a job while in school. However, he wanted to focus more on his studies, so he ended up doing something else.

Growing up during a time of war was never easy. He was still in college when the Korean War was going on, and he was worried about getting drafted and having to leave school. Charles ended up joining the Army ROTC, which calls for a two-year commitment to the military. However, that commitment allowed him to defer his two-year tour until after he graduated from Yale. He ended up going to Germany after graduation, where he eventually served as a lieutenant under the US Army.

Charles Johnson has always expressly loved Yale. He has become a regular benefactor of his alma mater, as he continued to donate funds to various athletic and student facilities and events at the university. Charles can also be credited as giving the Yale the largest gift it’s ever received. Charles gave $250 million to the school for the construction of two residential colleges. The entire project cost $400 million, and Charles donated more than half of the cost.

Surely, Charles has no problem with giving. In fact, he believes in giving freely. This is exactly the reason why Charles has become of the Republican party’s biggest benefactors. He’s given over $900,000 to various political campaigns including Mitt Romney’s and Ben Quayle’s. He’s also supported the likes of Jeb Bush. In fact, he gave over $1 million towards a Super PAC that supported Bush back then.

Life for Charles probably would’ve looked very different if Ann wasn’t in it. Charles met Ann Lutes during his time at Yale. The two were part of a college trip to Bermuda. Charles wanted to marry Ann before he deployed, before he had to go to Texas for training. Barely grads, the two got married one month before he had to report to base. Ann eventually became a medical doctor. She also was part of the restoration project involving Carolands Chateau in Hillsborough, California. The pair had a total of 7 children altogether, one of which died early on.

When you’re wealthy, you live where your neighbors will be wealthy as well. Charles currently takes residence in Palm Beach, Florida, where a large percentage of the world’s wealthy citizens owns property. Charles bought his Palm Beach mansion for an impressive $42 million in 2013, which is a ton of money. But Charles is considered to be about the 261strichest person in the world. His net worth is at $5.10 billion.

In some way, Charles was probably always meant to have some connection to baseball. When he was little, his father used to take him to ball games, especially since his father owned a box at the old Polo grounds. During the 1954 World Series, Charles was seated on the left field, and he witnessed one of the greatest moments in all of baseball history—Willie Mays’ incredible catch of Vic Wertz’s deep center drive. It’s a memory he cherishes to this day and something that has never left him after all these years.