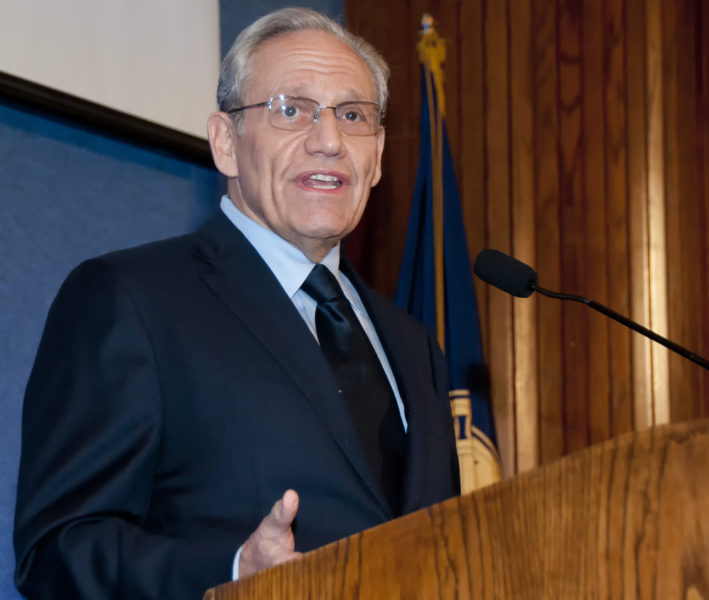 What Is Bob Woodward’s Current Net Worth?

There is enough interest in Woodward’s finances for there to be estimates of his current net worth. For obvious reasons, interested individuals shouldn’t put too much trust in them because they are based on incomplete information. However, these numbers might still be capable of providing them with a general sense of Woodward’s finances. In any case, Celebrity Net Worth estimates that his current net worth is approximately $25 million, though it should be mentioned that there are also lower estimates such as approximately $15 million.

How Did Bob Woodward Reach His Current Net Worth?

Woodward came from a well-off background. After all, his father was a lawyer who went on to become the chief judge of the 18th Judicial Circuit Court. In any case, Woodward went to Yale University on a Naval Reserve Officers Training Corps scholarship. As a result, he graduated with a bachelor’s degree in history and English literature. After which, Woodward served five years in the U.S. Navy. Once his tour had been completed, he was admitted to Harvard Law School but made the ultimate decision to not attend. Instead, Woodward started working at a newspaper in the Washington, D.C. suburbs while taking graduate-level courses from George Washington University.

It is interesting to note that Woodward had applied to work at The Washington Post after deciding not to attend Harvard Law School. He did get a two-week trial, but he wasn’t accepted at the time because he didn’t have any journalistic experience. After Woodward had spent some time working for the aforementioned newspaper in the Washington, D.C. suburbs, he managed to get hired by The Washington Post in 1971. Something that put him in an excellent position to work with Carl Bernstein on looking into the burglary of the headquarters of the Democratic National Committee that happened on June 17 of 1972.

Woodward and Bernstein were the first to report on the underhanded tactics used by the Nixon re-election campaign, meaning that they had a huge impact on everything that happened afterwards. Naturally, their book All the President’s Men became a best-seller, which isn’t even mentioning how it went on to receive a film adaptation in 1976. Said movie proved to be extremely influential in its own right. One, it turned both Woodward and Bernstein into celebrities in their own right. Two, it fueled a wave of interest in investigative journalism. Besides this, it is also worth mentioning that the two’s work created a lasting interest in the identity of their secret informant Deep Throat. Woodward swore that he would protect the man’s identity until either he was dead or he was willing to let his name be revealed. This resulted in a huge amount of speculation by both the public and the press, with some guesses being very plausible and some guesses being very much the opposite. Still, the secret held until 2005, which was when the public received confirmation that former FBI Associate Director Mark Felt was Deep Throat.

Since then, Woodward has been involved in a number of other notable incidents. For example, he was one of the editors for The Washington Post who backed the “Jimmy’s World” story, which was the supposed profile of an eight-year-old heroin addict. Woodward was the one who nominated the writer Janet Cooke for a Pulitzer Prize, which she won and then had to return when it turned out that she had made up the whole thing. To name another example, Woodward and Brian Duffy reported in 1996 that the Chinese embassy was coordinating donations to the Democratic National Committee. A Republican investigator claimed that there had been efforts to influence both presidential and congressional elections, while Democratic senators said that there was only evidence of efforts to influence congressional elections. On top of this, Woodward was one of the journalists who testified for the investigation for the Plame affair, which was centered on the journalist Robert Novak revealing Valerie Plume to be a covert CIA officer in 2003.

Having said that, a lot of people might be most familiar with Woodward because of his work in regards to the most recent U.S. presidents. To name an example, he was the journalist who spent the most time with George W. Bush, which enabled him to write multiple books about the Bush presidency at various points in time. These provide some of the detailed accounts of what was happening under said administration, thus making them useful for those who are curious about the various notable events of that period. Similarly, Woodward has written two books about the Obama presidency as well as two books about the Trump presidency. In the first case, one book covered the Obama administration’s handling of the wars in Iraq and Afghanistan while the other book covered the Obama administration’s interactions with congressional leaders for the purpose of restoring the American economy. As for the second case, one book covered the experiences of people working in the Donald Trump administration while the other book was a critical one that focused on everything from the Trump administration’s handling of the COVID-19 crisis to the Trump administration’s handling of international relationships.

It seems safe to say that Woodward made his fortune through his work as an investigative journalist for the most part in either a direct sense or an indirect sense. Over the course of his career, he has penned 13 national number one best-sellers, which isn’t mentioning the various other books that he has penned as well. Besides this, Woodward has also been involved in a number of other projects, with an excellent example being how he has co-written both a TV movie and a TV mini-series.