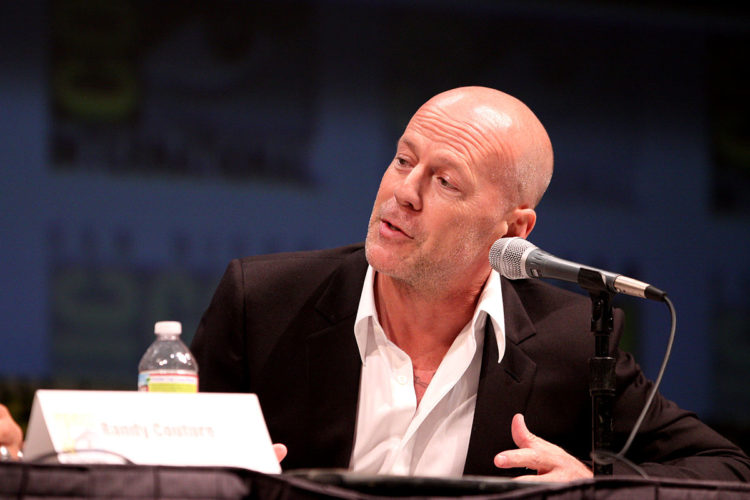 Bruce Willis isn’t as popular in the present as he was in the past. However, he remains one of the most famous names in the entertainment industries, which is unsurprising when his movies have brought in somewhere between $2 and $3 billion at the North American box office. Based on this, it should come as no surprise to learn that his current net worth is estimated to be $180 million.

How Did Bruce Willis Reach His Current Net Worth?

For those who are curious, Willis was born to an American soldier and a German woman in what was then West Germany. Later, once his father had been discharged from the U.S. military, Willis and the rest of his family moved to Carneys Point Townership in the state of New Jersey, where his father worked a blue-collar job while his mother worked at a bank. It was in school that Willis started performing on the stage, using it as a way to overcome his stutter. Something that had resulted in a lot of bullying over the course of his high school experience.

Upon graduating from high school, Willis worked in a number of jobs before he decided to pursue acting, which was followed by him enrolling in Montclair State University’s Drama Program. He never completed the Drama Program but instead headed on over to New York City, where he started pursuing an acting career in earnest while supporting himself by working as a bartender.

With that said, it wasn’t until Willis had left New York City for the state of California that he started getting bigger roles. Eventually, he managed to secure the role of David Addison Jr. on Moonlighting, which was particularly impressive because it required him to beat out 3,000 other actors. Said role was what established Willis as a comedic actor, as shown by the fact that he won awards and other accolades for it over the course of five seasons. Moreover, it was the first time that he received a product endorsement, which was the Golden Wine Cooler for Seagram that was worth somewhere between $5 and $7 million.

From Moonlighting, Willis started getting movie roles as well. In time, this led to Die Hard, which was the role that established him as an action movie star as well. Ever since, Willis has been acting in action movies, which is something that has brought him enormous success. For proof, look no further than the fact that the Die Hard series has managed to bring in more than a billion dollars when counted on a worldwide basis. For that matter, it should be mentioned that Willis is still acting in action movies in the present day, though for the most part, his current roles are by no means as famous as the ones that he received when he was still in his prime.

Based on this, it should be clear that Willis has earned enormous sums from his movies as well as his product endorsements. However, it should be mentioned that he has had other pursuits as well. For instance, he has had a semi-successful musical career, which resulted in a total of three studio albums being released in 1987, 1989, and 2001. Furthermore, Willis has been known to get involved in business from time to time. On one occasion, he started up a motion picture production company, while on another occasion, he co-founded Planet Hollywood, which was a collaboration between him and a couple of other action movie stars. Moreover, it should be mentioned that Willis owns a number of small businesses situated in the city of Hailey in the state of Idaho, which have presumably contributed to some extent to his current net worth as well.

As stated earlier, Willis remains active as an actor. As a result, while his current net worth has been estimated to be $180 million, it seems reasonable to speculate that future estimates will be higher and higher. With that said, there have been some signs that Willis has been slowing down in recent years, which is perfectly reasonable considering that he is in his 60s. Due to this, it remains to be seen how long he will continue to act in action movies as well as whether he will make a transition to some other genre at some point in the future.