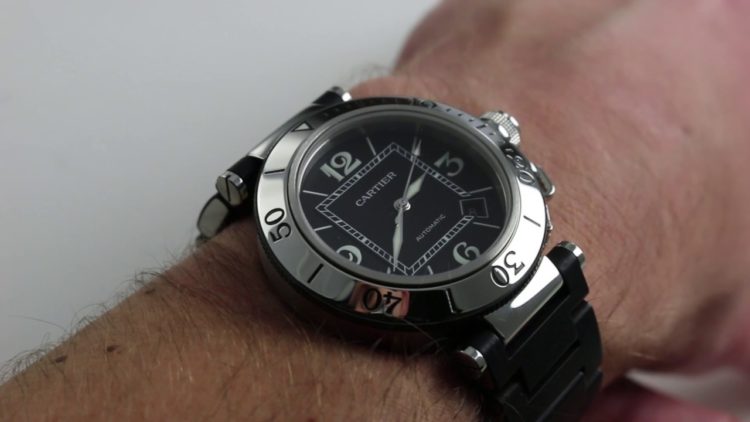 In 1847, Cartier was founded by Louis-François Cartier in Paris. It quickly developed a reputation for exquisitely crafted jewelry and watches. Almost 175 years later, its reputation remains intact. Now a global concern operating from over 200 stores in 125 countries, it’s known as one the most prestigious brands in the world. Worn by royalty, celebrities, dignitaries, and anyone else with an eye for the finer things in life, its fine jewelry and timepieces are the ultimate status symbols. Of all its creations, the Pasha de Cartier collection is arguably its finest. Birthed in the 1980s, the collection has spawned numerous versions over the years, with the Cartier Pasha Seatimer being one of them. Launched in 2006 to widespread acclaim, the Seatimer quickly became one of the brand’s most popular and coveted models. But what exactly is its story?

The Legend of the Pasha

It’s impossible to understand the history of the Cartier Pasha Seatimer without first understanding the history (and significance) of the Pasha de Cartier collection. As GQ Magazine writes, the origins of the Pasha can be traced to 1931 when the Pasha of Marrakesh, Thami El Glaoui, tasked Louis Cartier with creating a very special, one of a kind watch. The Pasha was an active man and he wanted a watch that was robust enough to keep pace. Cartier responded with a gold watch that boasted a water-resistance that was almost unheard of at the time. Resilient, durable, and crafted with Cartier’s legendary attention to detail, the gold watch boasted a large face, a crown cover, and a metal grid to protect the dial. Had the Pasha been presented with such a watch, he would no doubt have been delighted. The problem is, no one can say for sure whether he actually was. Although Cartier has traded on the legend of that one-of-kind watch for years, there’s precious little proof of its existence. These days, Cartier uses the official line that the Pasha de Cartier collection “pays tribute to the Pasha of Marrakesh, a lover of fine watchmaking and a lifelong customer of Louis Cartier.” But no matter. Whether the watch existed or not, it created a legend, a legend that Cartier would later revisit in 1985 with the very first commercially available Pasha de Cartier watch.

The Birth of the Pasha de Cartier

In the 1980s, Cartier revised the legend of the Pasha with the first official Pasha de Cartier timepiece. It came towards the end of a particularly tumultuous period for the watchmaking industry. The Quartz Crisis of the mid-1970s had sent ripples across Europe, forcing traditional, analog watchmakers to up their game in the face of the hugely popular Japanese Quartz watches flooding the market. Patek Philippe’s response, the Nautilus, had already been released to wide acclaim, as had the Audemars Piguet Royal Oak. If Cartier wanted to keep its place among the industry’s heavyweights, it needed to think outside the box and come up with something truly special. In 1985, it did exactly that.

A New Watch for A New Era

By the 1980s, the likes of the Ebel 1911 Classic Wave and the Rolex Submariner had proven that there was a market for luxury, water-resistant watches. Aiming to capitalize on the trend, Cartier enlisted the help of iconic designer Gerald Genta to come up with a resilient, waterproof watch in the spirit of the legendary Pasha. The result was a large, eyecatching piece with a sporty angle and a bold (but still exquisitely elegant) aesthetic. Its circular case stood out in a sea of square, rectangular or oval designs, while its geometric layout and swirly, art deco style font were equally eye-catching. A screw-down crown cap attached to an elegant chain lent excellent water-resistance (not to mention a ton of style), while the metal grid that guarded the face added yet more flair. Over the following few decades, the Pasha de Cartier would be used as the basis for numerous models, all of which kept true to the fundamental basics of that very first Pasha. In 2006, we’d be introduced to the Seatimer, a design that would prove to be one of the most popular versions of the Pasha to date.

As Revolution writes, by the mid-2000s, the world was obsessed with masculine designs. What better time, then, than for Carter to revisit arguably one of its most masculine designs ever, the Pasha de Cartier? After several decades of playing around with the Pasha in various forms, Carter decided that 2006 was the year to take the series’ dive watch attributes and legendary resilience to their natural conclusion. The result was the Cartier Pasha Seatimer. Featuring a 40.5mm case housing a self-winding movement, a water-resistant crown cap, a rotating polished steel bezel graduated with decompression time for divers, and a luminous dial in a choice of either black or white, it took the market by storm. Decoration came by way of a “Clou de Paris” decoration edge and painted luminous Arabic numerals. The Cartier name was clearly positioned under the 12 o’clock marker. The stainless steel case back was secured by 8 screws, while sapphire crystal protected the glossy dial. It’s most striking feature was its rubber bracelet, which came with a pioneering steel core and a double Cartier deployant clasp. As The Rake notes, Cartier doubled down on the sporty aesthetic of the watch two years later when it released a chronograph version.

Gone But Not Forgotten

It’s rare for a dress watch to offer such superb functionality as the Seatimer. Usually, elegance is achieved to the detriment of utility. But Cartier is clearly no ordinary watchmaker. With the Seatimer, it managed to pay homage to the legacy of the legendary Pasha with a watch that was as resilient as it was exquisite. The Pasha is now over 35 years old. The Seatimer has given way to new models that balance the flair of the original with modern-day advancements and requirements. But while it no longer occupies a place in the catalog, it still occupies a highly prized place in the hearts of many Cartier fans – not to mention their collections. As dive watches go, it was one of the best. As dress watches go, it was without parallel. Few watches until that time had managed to combine elegance with functionality quite so expertly. It’s for that reason, if for no other, that the Seatimer will be remembered for years to come.