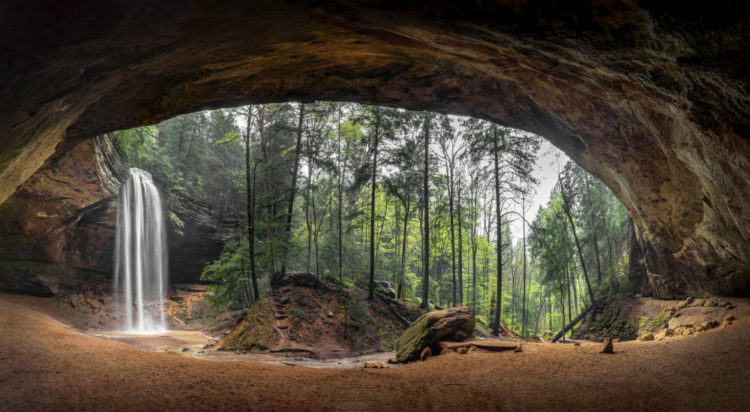 If you have never been to Ohio, you are missing out on what the Midwestern state has to offer. Some of the best attractions include the Rock and Roll Hall of Fame and the National Museum of the US Air Force. Besides providing ideal places for passive tours, Ohio also boasts of the best hiking trails, caves, and gorges for those who prefer breaking a sweat. Some of the caves in Ohio date back thousands of years ago, and here are the most awesome ones to include in your bucket list.

As Christmas approaches, you might want to consider visiting the White Gravel Mines. According to Only In Your State, the Christmas Cave at the White Gravel Mines provides unique illumination through thousands of lights. It has biblical scenes stretching for miles making the visit a memorable occasion and learning opportunity for the kids. Although admission to the Christmas Cave is free, each car pays a parking fee of $2.

The cave was discovered in 1813 when Commodore Oliver Hazard Perry and his troops searched for water and came across an underground freshwater lake. The cave is 52 feet underground, and the lake rises and falls depending on the tides of Lake Erie, although their connection remains a mystery. The natural limestone cave is registered as an Ohio Natural landmark. The Perry’s Cave Family Center comprises eight main attractions ideal for every family member. Children will enjoy racing in the Fort aMaze’s maze and admiring over 4000 species of butterflies in the Butterfly House. Adults can take turns at the mini-golf course, and car fanatics can visit the unique car museum.

On Exploration America, the author wrote that none of the caves was as intriguing as the Seneca Caverns. It is one of the largest underground caverns in America and has been preserved close to its original natural state. You get a one-hour guided tour leading through seven levels illuminated by electrical lights. The water table depth determines how far you can go. Besides carrying your jacket and walking shoes, you are advised not to take the tour with children. You can buy great souvenirs at the gift shop.

The Chapel Cave is also known as the 21 Horses Cave because it is arguably deep enough to keep 21 horses well hidden. It is described as a hidden gem in the Hocking State Forest since you will not find it on any nature preserve map. Riding on horseback is recommended because it is quite strenuous to walk on foot. However, if you prefer trekking, it is best to plan for the visit when there are no rains because that trail can get muddy.

Rock House cave is flaunted as the only true cave in the Hocking Hills region and is among the seven major hiking trails in the park. According to Inn & Spa at Cedar Falls, the tunnel-like cave is due to years of erosion. As per the article, the recesses in the rear wall were once used by Native Americans as ovens. Later, the cave became a hideout for murderers and bandits. The trail leading up to the cave is best for hiking, nature trips, and walking and the ideal time for visiting it is between April and October.

The cave derives its name from Richard Lowe, who lived in the area. When he died, Lowe was buried beneath the main recess cave’s ledge. It has five sections: Lower Gorge, Lower Falls, Middle Falls, Upper Gorge, and Upper Falls. It was formed after thousands of years of erosion from glaciation and Salt Creek flowing through the gorge. The cave is located along the length of the Black Hand Sandstone and extends to half a mile. It is ideal for hikers of all skill levels because it has a flight of stairs leading into and out of the gorge.

The Olentangy Indian Caverns have been open from April 1, 2021, to October 31, 2021. So, if you did not make it this year, you should plan for the next season. On busy weekends, the place can host between 700 and 800 people. The cave was first used by Adena and Hopewell Indians over 2000 years ago, and today if you want to explore the historic site, it will cost you. Anyone above 13 years pays $24.99, and children between ages 3 and 12 are charged $21.99 for an all-access pass to the cave tour, petting zoo, maze, mini-golf, and gem mining.

The “Ash Cave” name comes from the large amounts of ash that early settlers found in the cave. The largest pile discovered was three feet deep and thirty feet wide, and since Native Americans were speculated to have used the cave, it is assumed the ashes were from their campfires. The cave is 100 feet deep and 700 feet long. Its beauty is enhanced in spring by the waterfall once the snow melts. The trail leading to the cave is accessible even by children on strollers and anyone in a wheelchair.

In 2017, TrekOhio published that there was a new attraction in Hocking Hills State Park- the Whispering Caves. The recess cave running almost 300 feet wide has a 105-foot waterfall pouring from the upper rim. Despite being only four years old, Whispering Cave has quickly become among the top destinations for cave lovers because it is open all year round from dawn to dusk.

If you are looking for somewhere to visit during winter, the Ohio Caverns are currently booking the winter tour from October 1 to April 30. It offers guided tours all year round from 10 am to 4 pm but is closed on Christmas Day and Thanksgiving Day. You will have to pay an admission fee and are encouraged to make reservations of groups of 20, failure to which you will be admitted on a first-come, first-serve basis. Adults pay $19; children between 5 and 12 years pay $10, and kids four years and under visit for free.