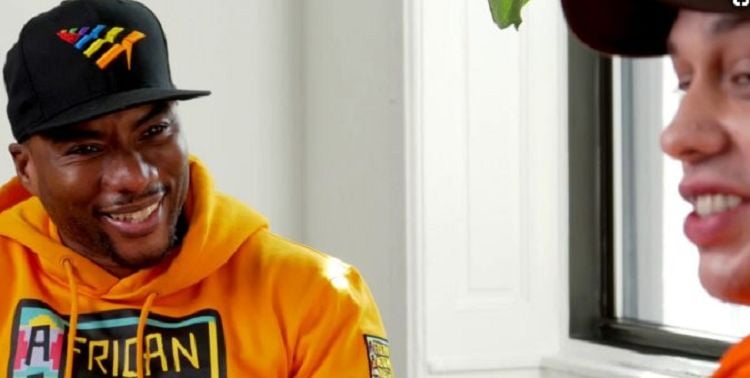 Charlamagne Tha God is the 41-year-old radio presenter, television personality, and author who’s made a fortune from saying exactly what’s on his mind, regardless of the consequences. According to Celebrity Net Worth, the star is now worth the grand sum of $10 million. How’d he do it? You’re about to find out….

Charlamagne Tha God was born Lenard Larry McKelvey on June 29, 1978. As a kid growing up in Moncks Corner, South Carolina, Charlamagne was exposed to all kinds of influences… not all of them good. By the time he hit his teens, he was already dealing. Over the next couple of years, he got arrested twice for possession with intent to supply. Both times, his parents bailed him out. By his third arrest (this time after he witnessed a shooting), his father had clearly had his fill of his son’s bad behavior. With no one prepared to post his bail, Charlamagne spent the next 41 days languishing in jail. Eventually, his mom decided enough was enough and bailed him out.

As it turns out, his spell in jail turned out to be the impetus for a major life change. After his release, he started attending night school, and from there, landed an internship at a local radio station. After winning over one of the programmers, he started appearing on air. One name change later (and if you were wondering where he got his stage name, let the man himself explain. “When I used to hustle,” he told New York Times, “I called myself Charles because I didn’t want the people who bought crack from me to know my real name. And then when I was in night school, I was reading in the history book about Charlemagne, which is French for Charles the Great.” He added “tha God” because he thought it sounded cool) and he found himself co-hosting alongside Wendy Williams on her New Jersey show.

After spending a couple of years learning his craft alongside Williams, Charlamagne was laid off in 2008. With no backup plan, he spent the next year on unemployment. But then luck struck. A chance meeting with Gee Spin, a programmer with 105.1, led to him being offered the job of replacing their longtime morning host, Ed Lover. Charlamagne accepted and soon enough, he was hosting The Breakfast Club on WWPR-FM. Charlamagne’s controversial style went down a storm with listeners, and by 2013, the show had become one of the station’s top-rated programs.

Much of Charlamagne’s success comes down to his very unique style. Described by Rolling Stone as “hip-hop’s Howard Stern”, Charlamagne’s blunt approach might not always be appreciated by his interviewees, but it never fails to be lapped up by his audiences. Some of the interviews that have gone down in The Breakfast Club history include: Kanye West: In November 2013, Charlamagne interviewed Kanye West… and saying he didn’t hold back would be downplaying what happened. “I didn’t like the album at all,” he told West. “Yeezus was wack to me.”

Justin Bieber: Clearly, Charlamagne wasn’t worrying about the fallout when he told Justin Bieber “Don’t be a waste of good white skin”. Lil’ Mama: In his early days on The Breakfast Show, Charlamagne inspired the wrath of Lil’ Mama when he told her she hadn’t accomplished enough to pull off her ‘cocky” attitude. As a further slight, he added “you’re young and you have an old face; like Drake says, ‘I’m really too young to be looking this old.’

Birdman: On April 22, 2016, Birdman lasted just 2 minutes on The Breakfast Club before walking out. After accusing the show’s hosts of not “putting respect on his name” by allowing other guests to disparage him, Birdman shut the interview down after Charlamagne asked why he was taking his anger out on the hosts rather than the other guests. The interview went down in history as the shortest on the show’s history.

The Move to TV

TV and radio are one thing, but if you want to reach as big and international audience as possible, you’re going to need to take it online. Charlamagne is currently doing exactly that on the YouTube series Emerging Hollywood on The Hollywood Reporter’s YouTube channel. He also hosts the podcast The Brilliant Idiots on Combat Jack’s Loud Speakers Network alongside fellow MTV2 personality Andrew Schulz.

Taking Up the Pen

In 2017, Charlamagne decided to give his mouth a rest for a while and express his words on paper instead. The result was Black Privilege: Opportunity Comes to Those Who Create It, a book Charlamagne described as “a self-help guide for the hood.” The book was positively reviewed, rising to number 6 in the New York Times’ list of best-selling hardback non-fiction. The following year, he achieved similar success with his second book, Shook Ones: Anxiety Playing Tricks On Me.

So, how exactly did Charlamagne manage to get that $10 million fortune? Other than wangling a $3 million annual contract with WWPR-FM, much of his success can be credited to him never failing to be anything but wholly and unapologetically himself. Discussing his philosophy with People, Charlamagne summed it up with, “It’s not saying success comes to those who create. It’s just that all anybody wants is an opportunity at the end of the day. So, I feel like if you live a true, authentic life — if you’re your true authentic self at all times — you can create opportunities for yourself.”