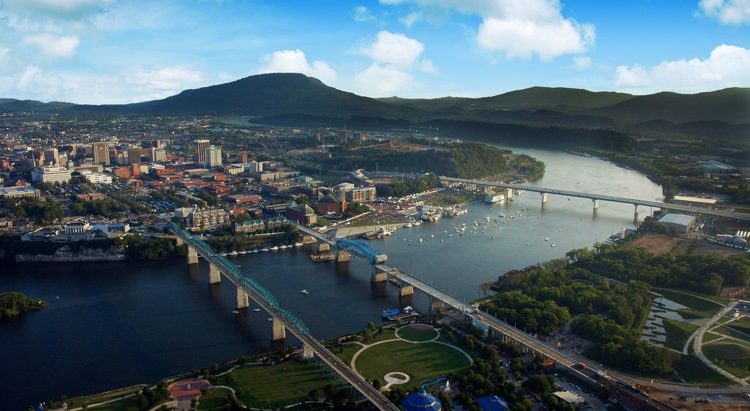 While rich in history, from Civil War lore and railroads to MoonPies and whiskey, Chattanooga, Tennessee, has flown under the radar in recent decades as one of America’s hidden gems. In some cases, that sentiment is also quite literal, as the city lays claim to Ruby Falls, one of the world’s tallest and most striking underground waterfalls, buried 1,000-feet beneath the surface of Lookout Mountain. That’s just a glimpse into Chattanooga’s myriad wonders, both natural and man-made, and what makes Tennessee’s fourth-largest city a destination-worthy visit for travelers of all persuasions—be it music-lover, hikers or foodies—from across the globe. The most prized asset for a city of Chattanooga’s size is its proximity to nature and its seamless connection to the mountains and waterways that surround it. Without the kind of overwhelming urban sprawl seen it metropolises, where residents and visitors would need to drive hours outside city limits to find any kind of substantial green space, Chattanooga makes it easy for people to hike deep into the woods, traverse rocky caverns, boat along the Tennessee River or even chase waterfalls, all within a few minutes of downtown.

Lookout Mountain is one of the most visible and iconic destinations in the region, offering a wide range of activities along the rim of the city. In addition to a plethora of hiking trails both moderate and intense, the miles-long mountain is home to the steepest passenger railway in the world, the birthplace of mini golf, dazzling Rock City (pictured above) and Ruby Falls, the deepest commercial cavern in the country, where guided tours culminate with an awe-inspiring waterfall more than 1,000 feet beneath Lookout Mountain’s surface. For those who aren’t afraid of heights, the Incline Railway is quite a rush. The slow-moving rail cars ascend about a mile up the side of the mountain, reaching a nerve-tingling grade of 72.7%. Along with unparalleled views, it’s a neat way to climb the mountain and combine it with other activities like Rock City, a maze-like landscape of enormous rocks, caves and unnervingly narrow passageways with names like “Needle’s Eye” and “Fat Man Squeeze.” There’s also deer, fairy tale-inspired caves, incredible views (naturally) and a vantage point where you can seven states from the same spot (spoiler alert, they’re Tennessee, Georgia, Kentucky, Virginia, Alabama, South Carolina and North Carolina). Another fun fact: we have Rock City Gardens founder Garnet Carter to thank for mini golf, which he invented on the mountain in 1926.

A bit closer to level ground, the Tennessee Riverpark is a real triumph of innovation when it comes to incorporating nature directly through the heart of a city. It also sets the bar for other cities developing their own riverwalks and parks, thanks to various elements like art, tree-lined boardwalks, wetlands and awe-inspiring vistas from the Bluff View Arts District, to name a few. Currently, the park extends for more than 10 miles, from the Chickamauga Dam right through downtown Chattanooga, alongside popular attractions like the Walnut Street Bridge, one of the world’s longest pedestrian bridges and the Tennessee Aquarium. The trail is popular for runners, walkers and bikers especially, and thanks to its roughly 10-foot width, there’s plenty of room for Chattanoogans and visitors alike to share in the liner park.

Considering its proximity to nature, it’s not much of a surprise that Chattanooga is home to some of the most fruitful agriculture in the U.S. This of course means an abundance of local farms, some of which are even inside the city or right on the outskirts. The best part is how inviting these places are to visitors and encouraging of farm tours and activities, getting people up close and personal with local food at its freshest. One particularly impressive example is Williams Island Organic Farm, a literal island farm in the middle of the Tennessee River that’s managed by the Tennessee River Gorge Trust. Clocking in at 450 acres, the island is enormous, with about 20 of them designated for farming—the rest is accessible for camping and hiking, but be aware that the island is only accessible by boat and tends to get quite muggy after rainfall. People have been farming on the fertile island since the 1800’s, with current owners harvesting the likes of sweet corn, pumpkins and squashes for sales to farmers’ markets and restaurants, CSA programs and grocery stores in the future.

Located right in the city is Crabtree Farms, a property that really sets the standard for what an urban farm can be. At the end of a quiet residential street, the farm suddenly emerges seemingly out of nowhere, with acres upon acres of berries, tomatoes, fig trees, okra and so much more. Not only is the farm fun to explore, but Crabtree goes the extra mile by hosting a variety of immersive events, cooking classes and programs on-site throughout the year. The farm is also responsible for the Grow Chattanooga movement, which raises awareness for locally grown and crafted foods and how they can be incorporated into everyday lifestyles for residents. When it comes to its thriving dining scene, Chattanooga is the rare city that effortlessly blends the old and the new with equal appeal. On one hand, there’s old-school classics and traditions that transcend generations, like the Chattanooga Whiskey distillery and the all-American MoonPie, which was invented here and still draws marshmallow sandwich fans to its factory. Conversely, Chattanooga’s new era of restaurants operate on a world-class level, maximizing the city’s bounteous farmland and incorporating fresh crops into novel dishes that speak to the region’s multifaceted seasons.

One chef to keep an eye on is Erik Niel, the dynamo behind Easy Bistro & Bar and Main Street Meats. A native of Louisiana, his Southern roots come through strongly at Easy Bistro & Bar, which opened in 2005 and has been racking up well-deserved accolades ever since. Easily one of the city’s most popular restaurants, housed in the former home to the world’s first Coca-Cola bottling plants, it features an impressive and widespread raw bar program and an array of seasonally inspired dishes, frequently with a fresh Southern slant. This is true of habit-forming snacks like cornbread with sorghum butter and bacon fat or crawfish and artichoke dip, and it’s true of burlier plates like shrimp and grits with spicy andouille and peppers or brisket with buttery potatoes, crisp haricots verts and kale. Easy Bistro routinely rotates various specials and other dishes as well, contingent on whatever’s freshest in the kitchen.

Along with his wife Amanda, Niel is also responsible for Main Street Meats, a carnivorous hot spot in the increasingly popular Southside District. Between its butcher shop, its wildly popular lunch and dinner menus and its bourbon bar, this place is quintessential Chattanooga to the core, complete with what’s surely of the best burgers in the country, sublime in its succulent, umami-packed simplicity. Again maximizing local farms, the Niels curate various charcuterie items, smoky sausages, crispy pork rinds with harissa aïoli, turkey sandwiches, steaks, pastrami Reubens and more. The cocktail program is impressive as well, with Old Fashioneds on draft and Southern tipples like the Homegrown, which features Chattanooga Whiskey Reserve, Mexican Coke and salted peanuts.

Elsewhere in the Southside District is St. John’s (pictured above), Chattanooga’s most acclaimed and seasoned restaurant, under the crafty tutelage of chef Rebecca Barron. Since its opening in 2000, the property has cemented itself in the upper echelons of restaurants in the American Southeast, revered for its beautifully prepared plates of regional American cuisine and its thoughtful wine list, with an immaculate bi-level dining room to match. Barron does a nice job blending American nostalgia, like Reubens and pork rinds, with serious precision and modernity. For instance, those “Reubens” are actually delicate slivers of meltingly tender capicola layered on toast points with Coppinger cheese, sauerkraut and tomato-herb aïoli. Further exploration of the menu reveals standouts like duck breast and confit with cashew pistou and venison with stone-ground grits and tangy cherry relish.

Tucked away inside the distractingly gorgeous Dwell Hotel, Terra Mae is a restaurant full of surprises. Courtesy of chef Hardin Cowan, the menu here draws inspiration from across the globe for an eclectic degustation of flavors, textures and colors. From kale-cashew dip and lemon tahini cabbage to Thai lobster soup and spice-rubbed Louisiana tuna, Terra Mae puts exotic, elegant cooking at an approachable price point. It’s adventurous without being too intimidating, and playful without sacrificing seriousness. When you’re done with dinner, head to Matilda Midnight elsewhere in the hotel for a nightcap. The chic, celestial-looking cocktail bar features some of the most exciting and intricate drinks in town, serving up the likes of banana-infused vodka and sake with a dash of celery bitters. Bold statement: the Tennessee Aquarium is the best in the country. This can be chocked up to a few reasons, the chief one being the sprawling downtown property played a pivotal role in spurring downtown Chattanooga’s renaissance when it opened alongside the Tennessee River. It helped catapult the city into a new era, bridging the gap between its historic past and its promising future, as evidenced by the surfeit of independent businesses that have popped up at a rapid rate in the vicinity, and the foot traffic that goes along with it. The aquarium is also unique in how it’s laid out, structured in such a way that it takes guests on a distinct voyage that follows the natural progression of water from forests and mountains through rivers, lakes, bayous and ultimately, the ocean. Along the way, you’ll see otters, penguins, birds, butterflies, sharks, jellyfish, massive sturgeon, alligators and even an electric eel that has its own Twitter account. Seriously, @EelectricMiguel sends tweets that are triggered by powerful electric charges in his tank, and the results are always entertaining.

Along with Civil War history, one of the most memorable facets of Chattanooga’s past is the Chattanooga Choo Choo, a wood-burning steam locomotive that embarked from Cincinnati to Chattanooga in 1880. The preserved Terminal Station in Chattanooga nowadays pays homage to the city’s past as a hub for trains traveling through the South. Today, the station is home to the Chattanooga Choo Choo Historic Hotel, where guests can literally sleep in old-fashioned train car rooms. The property also features restaurants, bars, a comedy club and the illustrious Songbirds Museum (pictured above), which contains a rotating lineup of 300 rare vintage guitars culled from a collection of more than 1,500. Music junkies should opt for the VIP Vault Tour, which gets visitors up close and personal (aside from locked glass cases) with some of the most exclusive guitars on the planet.

All photos courtesy of Chattanooga CVB.