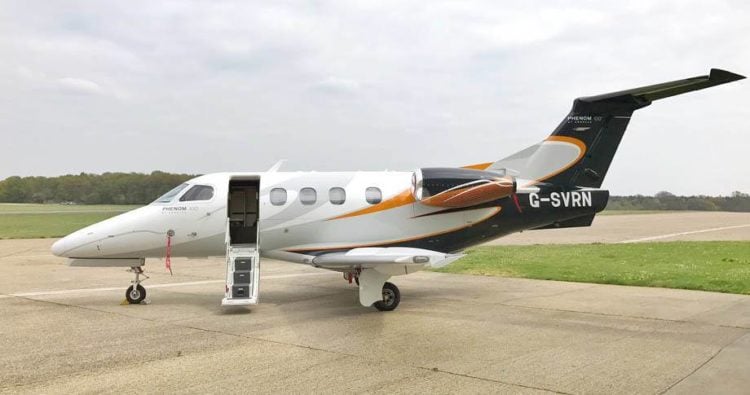 When you think about business jets, you usually think about something that is large enough to carry 10 or even 15 people. However, there are some jets out there on the market that are designed to be much lighter and more agile, yet they do the same job. One of those aircraft is the Embraer Phenom 100. Without a doubt, this is one of the smallest business jets that you’re ever likely to lay eyes upon, but you shouldn’t fail to realize its capabilities just because it’s small. Below are 10 things that you may not know about this remarkable aircraft.

This particular company has been making business jets for several decades now. In fact, when compared to other companies like Gulfstream and Learjet, it’s one of the best-known companies of its type and it has a great deal of longevity.

2. There are more than 350 of these aircraft in service

This is an extremely popular jet. It’s only been in service for about 11 years, yet there are more than 350 of them in service. Typically, you would see those same types of numbers on a jet that had been in service for at least another decade. One of the reasons it is so popular is because of its light weight and maneuverability.

3. Currently, these jets operate in more than 35 countries

The fact that the jet is registered in more than 35 countries is indeed a testament to it’s overwhelming popularity. It utilizes less fuel than most larger jets and it can fly into and out of airports that may not have runways long enough to accommodate the bigger and more cumbersome aircraft. This makes it a popular choice for people all over the globe.

4. It incorporates what’s known as a T-tail design

It isn’t just its lightweight that makes the aircraft so maneuverable. It incorporates the popular T-tail design, with the vertical stabilizer and horizontal stabilizers being connected high up on the airframe. This is a popular design that’s been incorporated on various aircraft for more than 50 years, often making them more maneuverable and more responsive to control inputs.

5. It has two jet engines

The jet is light enough that it could probably operate just fine on a single-engine, but it does in fact have two. This allows it to get where it’s going much more quickly and it provides security for anyone that’s apprehensive about traveling in an aircraft that has only one engine.

6. Those engines are mounted higher up on the fuselage than usual

One of the first things that you’re likely to notice is that the engines are mounted higher up on the aircraft’s fuselage than most people are accustomed to seeing. Part of this is for improved weight distribution but the main reason the engines are mounted so high up is because of the jet’s relatively small size. Since the engines aren’t mounted on the wing, they had to be placed in a position where neither the engines nor the wings would be adversely impacted by their position.

7. It can travel more than 1,100 nautical miles without refueling

Despite the fact that it has two engines, it’s so lightweight that it can travel more than 1,100 nautical miles without having to stop for fuel. This gives it a range that is similar to many other popular business jets, making it much more economical to operate.

8. It has enough room for four passengers

If you think the interior is cramped just because the jet is smaller than a lot of the competition, think again. Four passengers can comfortably seat themselves inside, making this the perfect jet for smaller companies that don’t typically have as many people traveling at one time.

It’s also a popular Charter aircraft with a number of airlines, especially in more remote areas where speed and maneuverability are important.

10. It’s also used by a number of military organizations

Like most business jets, it’s also utilized by the military. The fact that it is so maneuverable and efficient to operate makes it a popular choice with countries all over the world for both military and civilian operations. When you think about all of the things that make this aircraft unique, it’s no wonder it’s used by so many different customers. It’s capable of filling practically any role that it’s needed for, and it does it quite well.