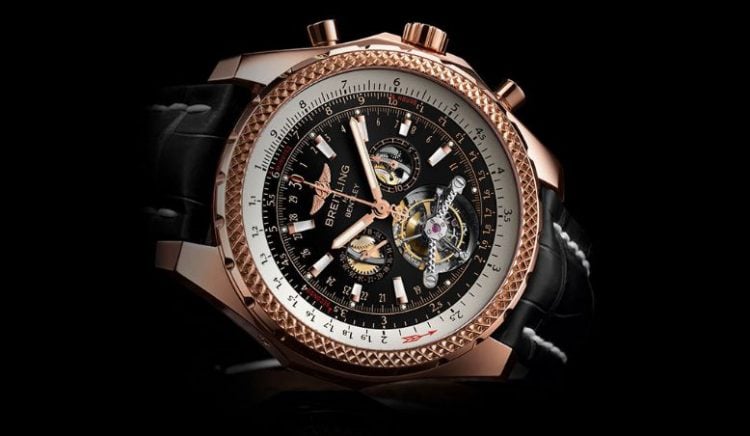 Since their earliest days watches have been used as status symbols, and models from the most prestigious brands in the industry cost a bundle. While it’s certainly possible to find a decent looking watch for a few bucks, the world’s most high end and luxurious timepieces aren’t mass produced. Instead, they’re full of exquisite craftsmanship, fine detail, and are available in very limited quantities.

Those who most often find themselves buying very pricey watches typically have both the money and interest to invest in them. Such models are not only a way to show wealth but collector’s items that can be passed down through generations. Here are five of the top watches that cost $100,000 to $110,000. 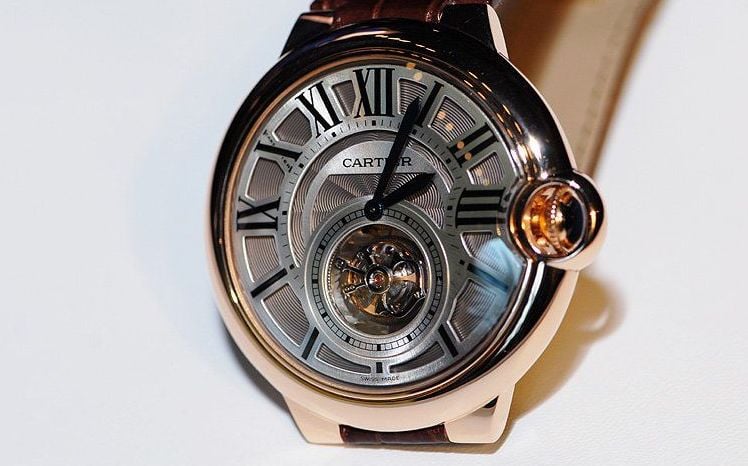 This chronograph watch is the epitome of classy, sophisticated, and expensive. If you can believe it, the Calibre de Cartier is one of the least expensive in its collection, which is saying something as it costs over $100,000. The timepiece features a flying tourbillon, 45 mm case comprised of 18 carat white gold, and a guilloche dial with a slate tone and texture provided by finely engraved circular markings. Roman numerals and Arabic ones encircle the dial, and the signature blue hands of the watch are an unmistakable piece of Cartier’s legacy.

Other noteworthy features of the Calibre de Cartier Flying Tourbillon include a manually wound house made movement — the Cartier Caliber 9452 MC — the inclusion of a flying tourbillon complication, a 50 hour power reserve, double adjustable deployant buckle made of 18 carat white gold, and a seconds indicator positioned by a “C” shaped tourbillon cage. This watch has been a hit in Hollywood circles for years, and it’s been seen on the wrist of a number of high profile A-listers and celebrity athletes. You’d practically have to be famous to afford this watch, but it’s definitely worth the investment for its function and beauty. 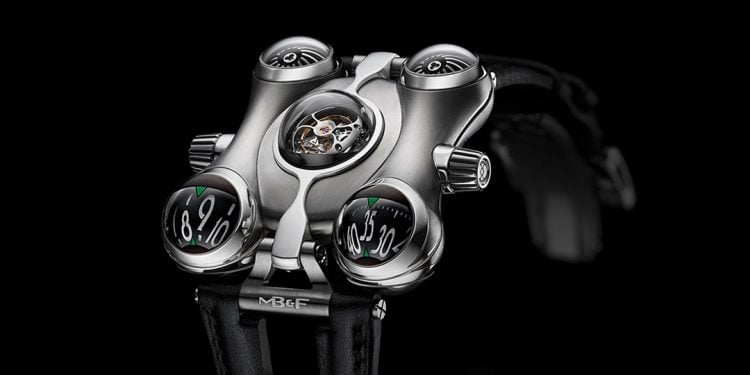 So complicated, avant-garde, and off-beat are the watches from MB&F that they don’t call them “watches”. Instead, the models are called “Horological Machines”. There’s a wide range of them, and some come in under the $100,000 mark. However, a significant number of the watches in this collection from MB&F cost $100,000 or more — the higher the price, the more limited the quantity produced and exclusive the design.

For the brand’s 10th anniversary in 2015, MB&F came out with the HMX Horological Machine, a model that incorporates Grade 5 titanium, sleek detailing available in red, green, black, or blue, and a house made horological engine — that’s what MB&F calls its movements. The movement is three dimensional, derives its power from a Sellita gear train, contains 29 jewels, has a power reserve of 42 hours, and features an innovative trailing minutes and jumping hour module. 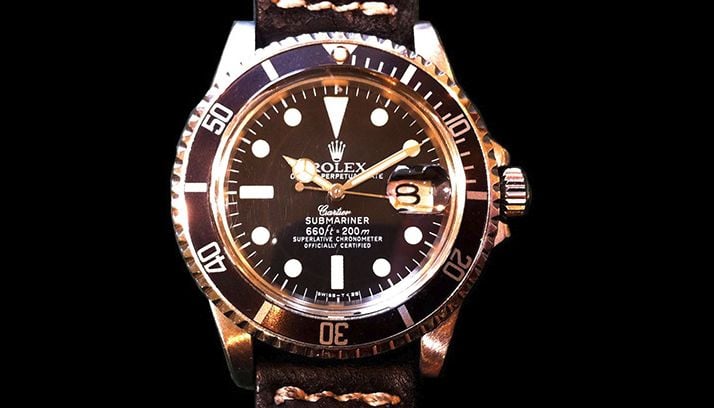 One of the most popular watch models from Rolex is the Submariner. Typically, this watch would cost between $5,000 and $10,000 for the white and red iterations, respectively. However, when the brand came out with a Submariner watch for high end jeweler Cartier, they pulled out all the stops and produced a timepiece with a price tag of $100,000. It’s certainly not the first in the line of watches that cost $100,000 that Rolex has produced, but it’s one of the most crave worthy.

It’s not easy to find the model these days, as when it first premiered the Rolex Submariner for Cartier was only sold at Cartier’s Fifth Avenue boutique in New York City. Each watch was accompanied by complementary archival papers, an exclusive red box with the Cartier logo, and a note about its date of purchase. To get one you’ll not only need the cash, but the ability to get to a posh auction.

Breitling’s Mulliner Tourbillon was made for its collaborative line with automaker Bentley. As expected, if you have an upscale watch collection with the Bentley name attached to it, the timepieces up for grabs are going to be exclusive and quite expensive. Inside the watch is the Breitling Calibre 18B, an extraordinary mechanical movement that’s hand wound, officially certified by the COSC, contains 26 jewels, and produces 21,600 beats per hour.

The case back of this model is see-through, so those who are able to own one can see its inner workings in action. As far as watches that cost $100,000 go, any added on features are a plus that helps justify its price tag. The Breitling Mulliner Tourbillon has water resistance to 5 ATM, a screw locked crown, rotating bezel with a circular slide rule, and a display covered by cambered sapphire crystal that’s glare-proof on both sides. 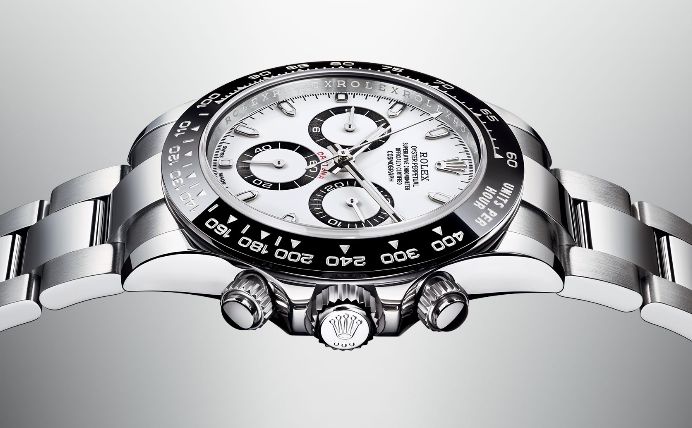 The Rolex Cosmograph Daytona first debuted in 1963 and was originally designed to be a timepiece and tool for professional race car drivers. Today, it’s known as a high end wristwatch that no one but the wealthiest celebrities and businessmen can afford to splurge on. It’s been worn off the track for decades now, and one of its most beloved features is its highly precise tachymetric scale. This feature allows the Cosmograph Daytona to measure and calculate the average speed that one is driving all the way up to 248.5 miles per hour.

This watch is well known for its handsome, timeless style. It’s available in a wide range of color and material combinations, from stainless steel and yellow gold with a black face to Everose gold with a premium leather band. The 40 mm watch looks equally attractive in all its forms, and it hasn’t lost an ounce of its popularity since it first came out. Rolex introduced a new iteration of this watch in 2016, and the line contains versions just as pricey as its predecessors. 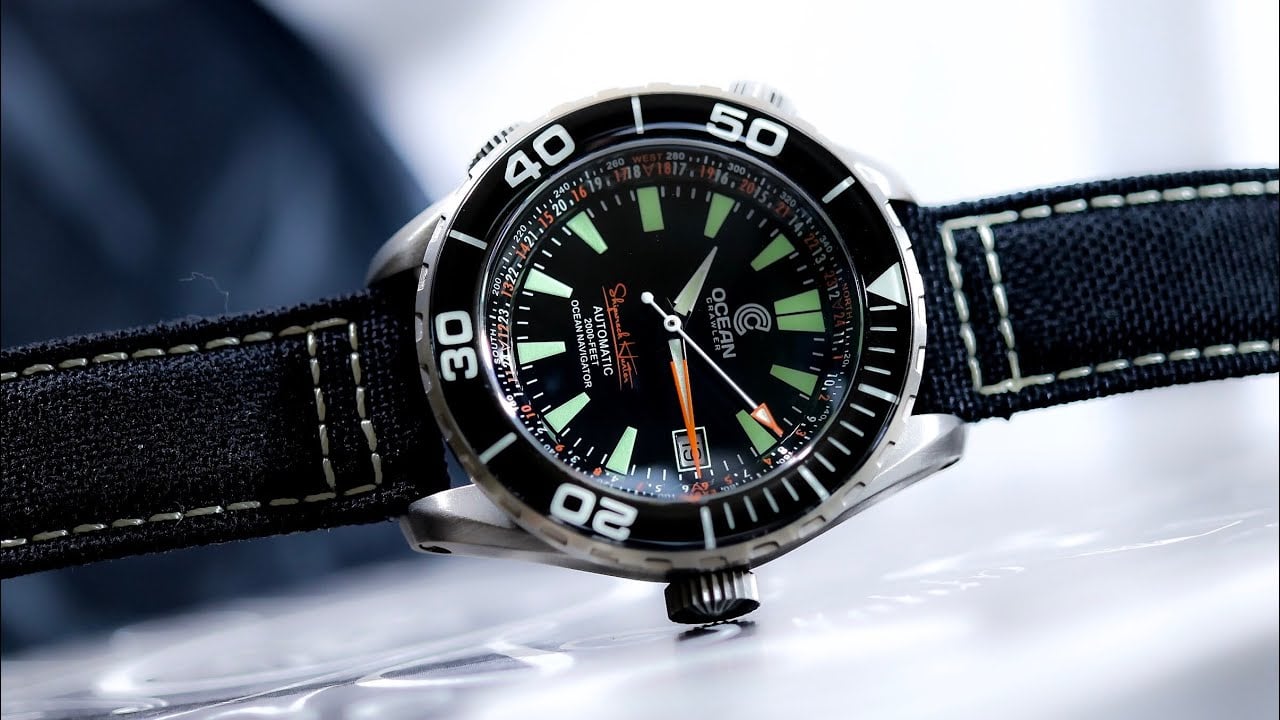 Whenever you hear about a dive watch, your mind probably wanders off to a Rolex Submariner or an Omega Seamaster. However, there is one watchmaking company in the New York area that is growing its… 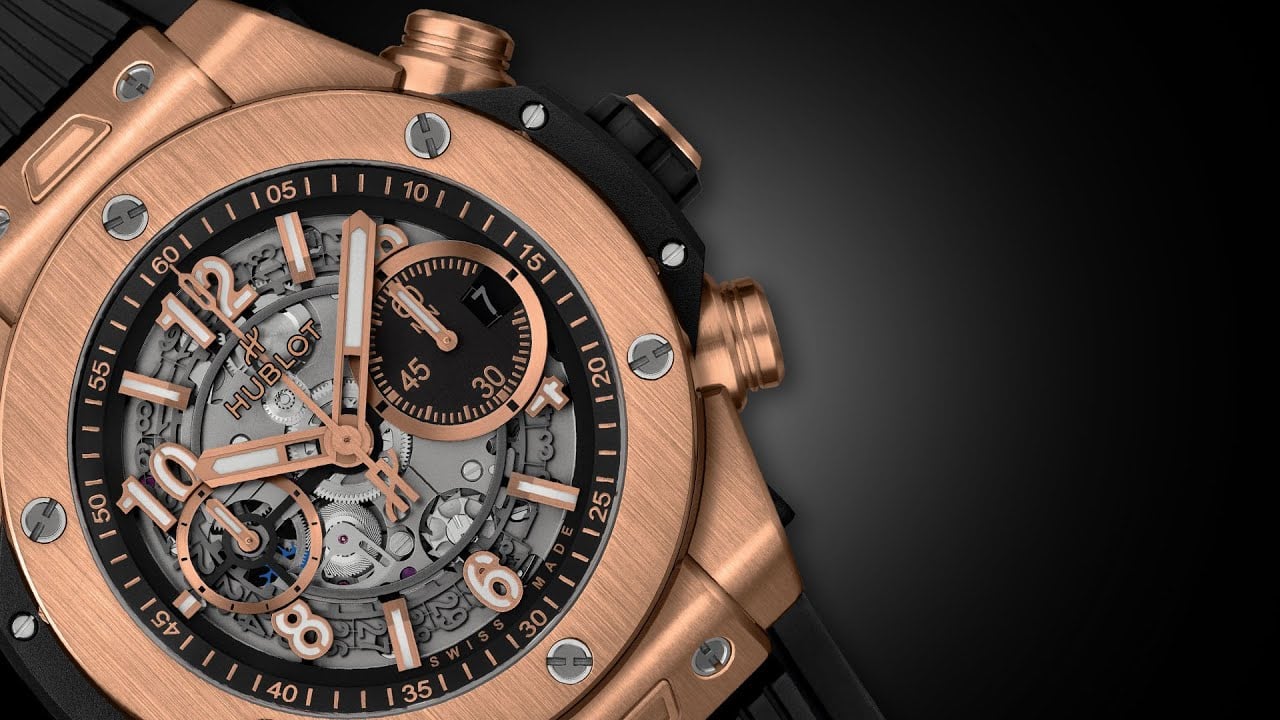 Hublot watchmaking began in 1980 when the company headed by Carlo Crocco, a visionary Italian from a family of watchmakers, broke new ground by pairing gold, a precious metal, with natural black rubber, which became… 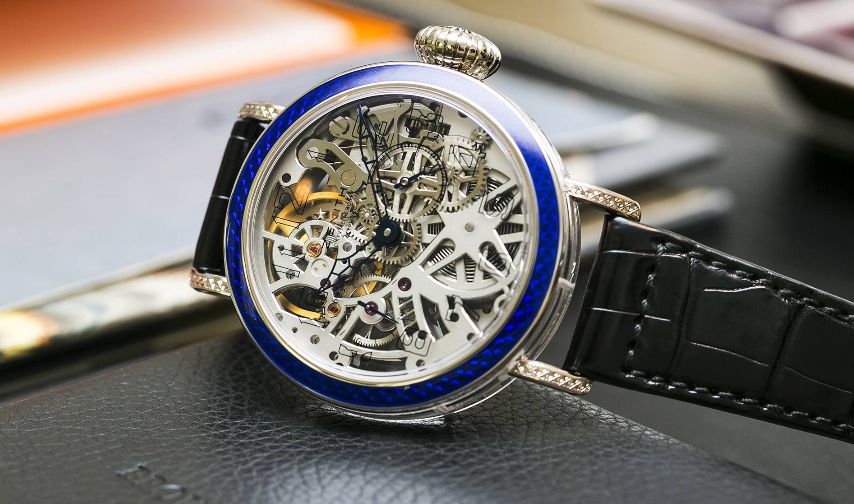 With the new age of aviation in the 20th century came the need for a specialized timepiece that was very precise, reliable, and technologically advanced. Enter the aviator watch, also know as the pilot watch….

The Speedmaster can be traced back to 1957. It was introduced during the Olympic Games as a sports chronograph to complement Omega’s position as the official timekeeper of the competition. The name was inspired by… 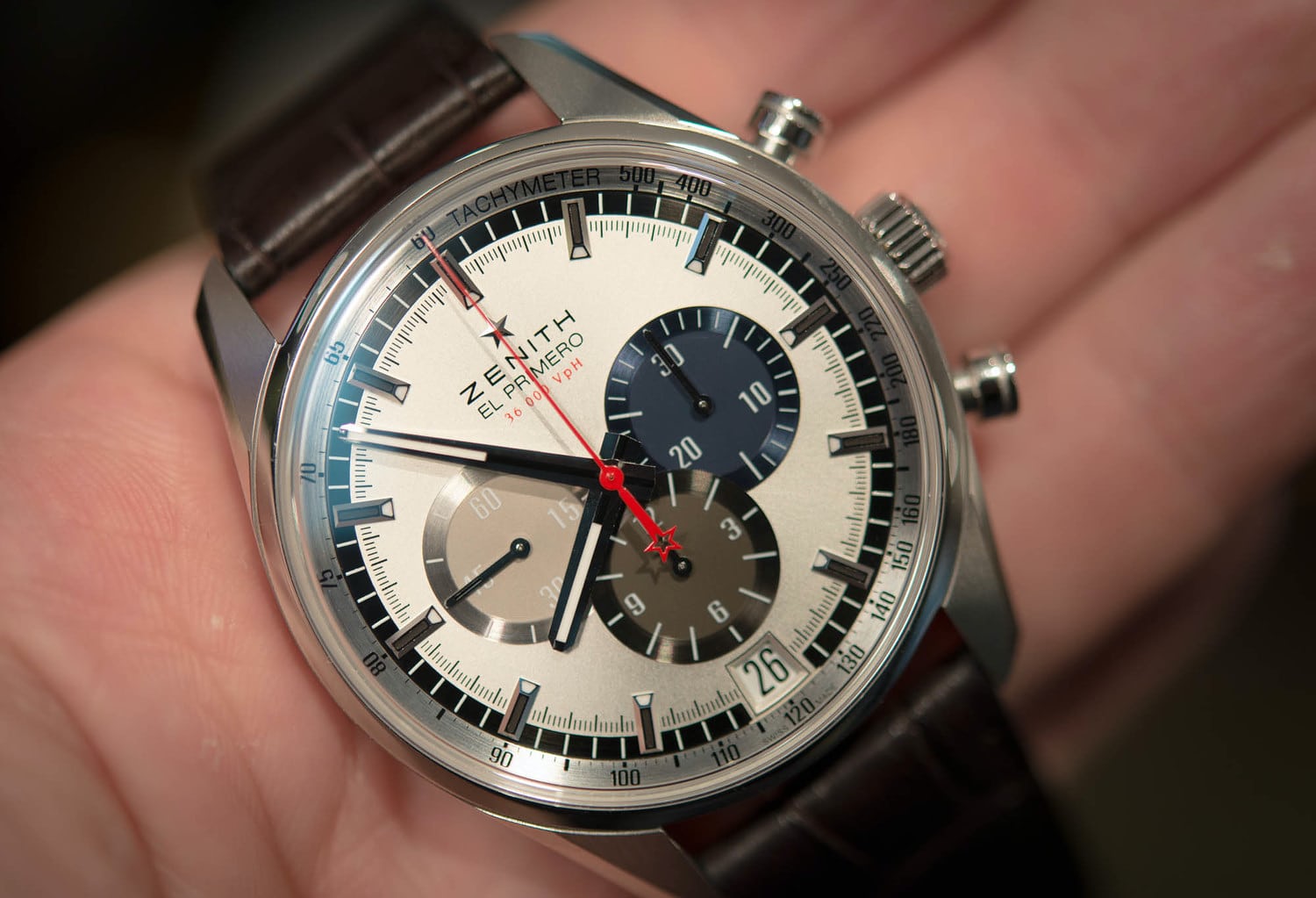 Two-tone watches are fashionable. There is something about the combination of gold and steel metals that gives a wristwatch the impression of being strong and durable, yet stylish and valuable. The combination provides both benefits… 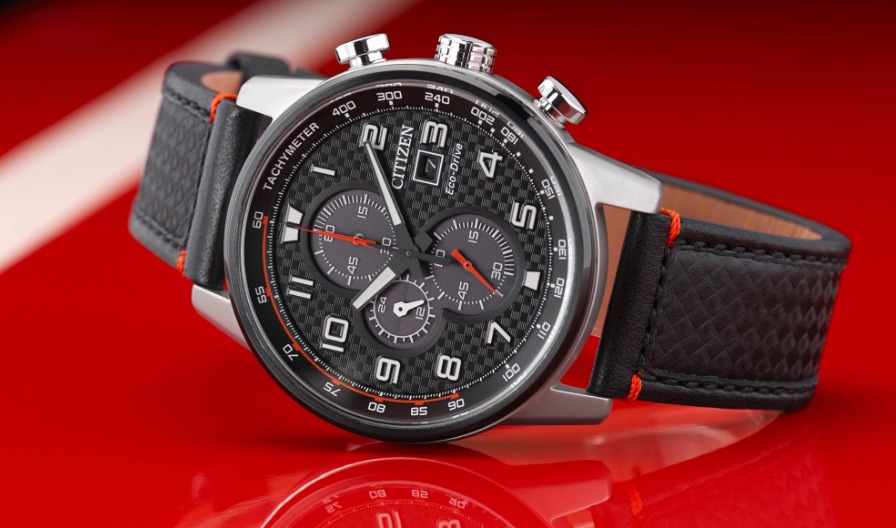 If you didn’t know about Citizen’s Eco Drive watches before, it’s about time you’re let in on the tech secret. There’s a wristwatch out there that’s not driven or powered by batteries or any other…