Home
Cars
Lamborghini
How Do You Get Your Hands on a Lamborghini Countach Kit Car?
Prev Article Next Article 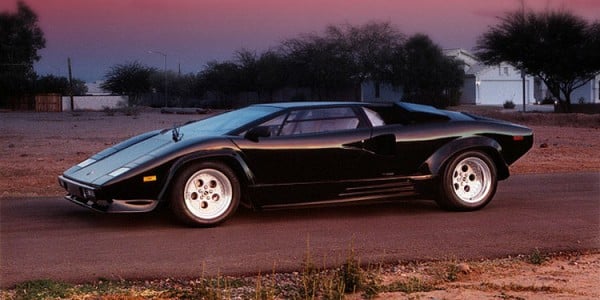 How Do You Get Your Hands on a Lamborghini Countach Kit Car?

The Lamborghini Countach broke the record of the largest tires in a production car and introduced the scissor door design. It had its share of hiccups because one of the initial prototypes blew up and after the first batch of production, Ferrucio Lamborghini wondered if continuing its production was the best decision, but demand was high. In the end, 2,042 Lamborghini Countach vehicles were produced. Of course, the limited supply caused the price to go up, and the most expensive Countach went for $1.2 million. Their high cost limits the number of people who can afford them, but there is always a way out for the determined, and in the world of vehicles, kit cars are the solution. You can have your own Lamborghini Countach kit car and here is how you can get your hands on one.

Buy a complete one from kit car suppliers

According to Kit Car Empire, some companies built their own version of the Lamborghini Countach. For instance, one company based in Germany built a Countach replica built only in a small volume. Another kit supplier, Ladret of Alberta in Canada, expected you to provide the chassis that had to be either Toyota MR 2 or Pontiac Fiero for them to build you a kit car. Pontiac and Toyota were not left behind in trying to meet the rising demand. Hence they produced 364,000 and 200,000 kit cars respectively. The one built with a Pontiac Fiero engine was listed in Craiglist for $25,000 in 2015 which is still quite a large sum of money.

Many kit car suppliers are still dedicated to providing their customers with products that appeal to them and one Facebook page, Lamborghini Countach Kit Car Rebuild, is among them. Although the last post was in 2017, it reads that Prova was back in the business of building and supplying Lamborghini Countach kit cars. After buying your kit car, another Facebook page, the Lamborghini Countach Replica Kit Car, that shows you how you can maintain it and also provides you with a platform to share your experiences with the vehicle. However, before you spend any money on a kit car, you should know that if they are not well maintained, they corrode fast. The main parts that are prone to rust are the winged front doors and the chassis.

Make your own kit car

Of course, buying a kit car that has been assembled for you is much more costly than actually buying the parts and assembling them yourself. Rock West Racing gives a few tips to consider when you decide to do it yourself. First of all, the aim is to get your dream car but still keep the cost low; hence the article advises that you should search for a donor car that is in good condition. You should not be fooled by the exterior such as paint because what you are interested in are things like brakes, steering wheel and other running parts. If you cannot find a donor car from which to get the necessary parts, you can visit junkyards and do some window shopping before settling on any particular one. That way, you will get a chance to assess the best running gear and compare prices.

However, even before you decide to start building your kit car, ensure you have the skills needed otherwise you will end assembling and disassembling. It can be frustrating if you go wrong in the process and you cannot trace where the problem lies hence also ensure that you have instructions to follow through until the car is fully assembled. Companies took about 200 hours to get the base vehicle together which means if you are interested in building your own Lamborghini Countach kit car from scratch, you must be ready to commit your time to the project. It will also cost you a considerable amount because according to Prova, a stage 1 kit will have you parting with about $13,000 while a stage 2 kit is priced at about $25,000.

Inspiration to make your own Lamborghini Countach kit car

One man, Ken Imhoff, became obsessed with a Lamborghini Countach after watching “Cannonball Run” and he knew he had to have his own. Unfortunately, the price was too high, but his father had told him as a young boy that if he can make something, then there was no need to buy it. Ken, therefore, decided to build the kit car and was sure that within five years his project would be complete. However, he had a day job as a process engineer and could only build the car in his spare time. Therefore after his honeymoon, he waited for a couple of weeks before beginning. Even then, he did not have enough money, so he had to borrow $2,000 from his wife.

According to Jalopnik, the first time Ken fired up the engine was when his wife was pregnant with their first child. That gave him the motivation to go on, and as his family had dinner, he was holed up in the basement doing everything possible to achieve his dream car. He lost hope along the way but would still push himself to complete the project thus after 17 years, Ken finally had the car, but he had to make a hole in the wall of the basement to get it out for the world to see it in 2008.

After toiling on the kit car for almost two decades, Ken decided to sell it saying the car deserved to be with someone who would love it better than he did. According to him, the rust it was beginning to show was proof that he did not have time to take care of it. He was very particular about only selling to a person who would cherish it. To reward himself for the hard work, he attached a $75,000 price tag on the kit car.