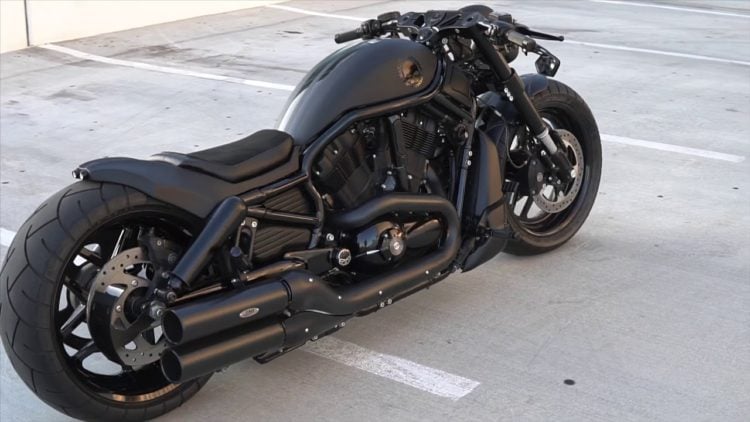 The Harley-Davidson Night Rod Special is a member of the V-Rod model family. It was released in 20. The VRSCD Night Rod was released in 2006 with mid controls that mimicked those of the 2006 Street Rod edition. The 2008 release evolved with an increase in power from 1131 to 1247 taking the peak power to 125 hp and torque to 84 lb ft. This was the last year that the VRSCD Night Rod was produced. It continued forward in other iterations.

From 2007 through 2017 the Night Rod Special became the evolutionary member of the family. This was a custom version of the Night Rod with the HD Dark attitude and persona. Much of the chrome was replaced with black paint. In 2012 the tenth anniversary was observed with the Night Rod Special. It featured chrome slash-cut mufflers over the straight found in the previous editions and a chrome exhaust shield. Diamond cut headlights added another new look and it was released with inverted front forks in silver with a few other chrome accents and a platinum crankcase and heads, and the V-Rod 10th anniversary badging.

The Night Rod had a special place in HD history when it entered into a highly competitive market as a new branch of the V-Rod family and it took its place as a power cruiser with a dark personality for those who prefer to do their partying in black. It offered stylish good looks, all the power one could desire and a comfortable ride so why was the Harley-Davidson Night Rod discontinued?

The variant featured a liquid cooled Revolution 60 degree V-Twin engine with a 1247 cc displacement. Its popularity stems from the first glance at the all black giving it a dark and serious personality that signals the power within. There is no-nonsense in its design and the power that it offers for cruising down the freeway in style. With a top speed of 118 mph and 125 horsepower it has all of the get up and go a serious rider could hope for.

Dual overhead cams with four valves per cylinder and electronic sequential port fuel injection, paired with a 5 speed transmission tie it in neatly to the family. The Night Rod Special is designed with a hydro formed perimeter frame with the fuel tank under the seat. The streamlined design gives it a sleek aesthetic combined with a fastback tail section, low rise bars, and cast aluminum wheels. Brembo dual disk brakes add to driver confidence. The growl of the V-Twin is a Harley-Davidson signature feature and it takes center stage with the Night Rod Special. Top it off with a drag style riding position with performance to the fore, the sleek appearance is complemented with a large 240 mm rear tire that gives away the sense of driving force and power.

The front end is raked out in the style of a street dragster with the small firing sitting above the headlamp. Minimal wind resistance allows the Night Rod to achieve greater speeds. The radiator is hidden behind a cover that provides protection from rocks and other road debris along with an air scoop that circulates the airflow across the radiator to ensure it’s properly cooled. The HD design team took into consideration every small detail.

Why was the Night Rod discontinued?

Harley Davidson discontinued the V-Rod family in 2018. That’s why you won’t find one after the 2017 production date. The Night Rod is a variant within the V-Rod line and it was a part of the group that wouldn’t make it to the 2018 lineup. The reason for its release to begin with was to enter into the competitive arena with Japanese motorcycles. The Night Rod was an answer to the Japanese bikes and it held its own at a time when something new had become a necessity to maintain standing in the marketplace.

A special model to reach the non-Harley base

Harley-Davidson’s release of the V-Rod model was done so with the intention to get the attention of the riders who had not previously been Harley fans. It represented a departure from Harley tradition and the design wasn’t a typical layout HD had embraced previously. It drew in a new customer base and introduced them to Harley-Davidson by offering something different that was in line with what the successful Japanese manufacturers were doing at the time.

Harley still has come catching up to do

The Harley-Davidson Night Rod, and when you get right down to it, the V-Rod collection in general is powerful for the size of the engine, but the track inspired power cruisers that are coming out of Europe have set the bar incredibly high and the Night Rod simply can’t keep up nor hold its own under their shadow. Harley-Davidson is still playing catch up with Japanese and European innovators and they haven’t quite gotten there yet. Although they’re moving in the right direction, HD has consistently lagged behind with their painstakingly slow answer to the designs offered by Europe’s finest power cruisers. ).

The Night Rod has had a good long run of it and it’s done its job for the Harley-Davidson brand. Maintaining posture in a competitive world market is the name of the game. When it’s time to retire a model, the manufacturer has little choice but to move forward to meet customer demands and expectations. With the bar set high by European power cruisers, it’s time to turn their focus to something fresh and new to keep pace. We’re all waiting to see what HD is going to do next because there is still a non-Harley market out there that just may bite on a new non-traditional bike.