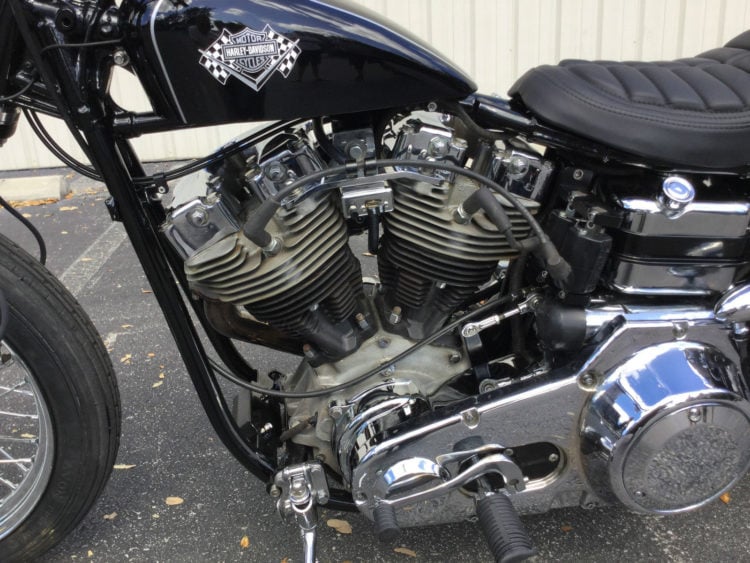 The Harley-Davidson Shovelhead engine was first launched in 1966. . To fully understand the yin and yang of the machine that supplied the power for some of the sweetest bikes in the history of the brand, it’s important to know the history behind it. It made a long run that lasted through 1983, but it’s not been forgotten. For those who only remember the early days of the Shovelhead, and its shaky start, there were some redemption made that brought it back into favor. Here is the history of the Shovelhead engine.

The 1966 Shovelhead engine was inspired by the Panhead with the same 74 cubic-inch 1200cc engine. It was the replacement model for the outgoing Panhead. Some changes were made to the engine however. The first Shovelheads released came out with aluminum cylinder heads borrowed from the Ironhead Sportster but with a redesign and a ten percent bump in power. Rocker boxes replaced the valve covers and the visual similarity to coal shovels earned the new bike the name “Shovelhead.” A Linkert carburetor fed the bike with a compression ratio of 8:1 and the engine was mated with a 4-speed transmission with chain for the primary and final drives.

The first redesign came in 1970 and continued forward. Among the initial changes in the evolution of the Shovelhead was the addition of an alternator, and a gear drive unit on the bottom end. The external timer ignition was replaced with mechanical breaker points and advance in the Shovel Head’s gear case. The ignition and alternator were situated in the timing case with a cone shaped cover. More redesigned were made to the primary covers

Bendix carbs were added in 1971 and remained through 1975. A pull-out dipstick was added to the redesigned oil tank and chrome plating was used to adorn the exhaust header pipes. The flex covers with chrome plating were discontinued. The last foot shift/hand clutch combination was popular, but discontinued in 1972. Willie G. Davidson designed the front end of the Super Glide for a lighter and thinner achievement in 1971.

The Shovelhead was a financial move

The creation of the Shovelhead engine was a big financial benefit for Harley-Davidson during a time when things were getting lean. The brand had to do something to attempt to keep up with the competing brands, as they’ve maintained a habit of lagging behind in their innovations. The goal for the 1965 engine was to create a more powerful engine that could perform with the extra weight created by the changing technology in motorcycles. This was namely, the rear suspension, electric start systems and other innovations. It was a successful move that resulted in 36,310 of the engines being sold reflecting an increase of roughly 26 percent.

The changes that Harley made in the Shovelhead engine were all purpose driven. This was for the purpose of competition. It did result in a new aesthetic, but that came in second behind the boost in power and the accommodation of the new technology. It was make or break for a brand that had taken their time in advancing motorcycle technology.

Problems with the new engine

The Shovelhead engine was not without its share of issues. Early on in its existence, it was plagued by glitches that required tweaking to solve the problems. There was a problem with oil pooling in the shovelheads instead of returning to the crankcase. As the lubricant leaked past the valve guides the result was smoke coming from the exhaust. Wet dumping of this nature can lead to a host of different problems including making the performance more sluggish or stopping the bike. Oil temps would rise as th bike slowed down and it was determined that a smaller flywheel could help to solve the issue. The bikes fitted with the Shovelhead engines were running through as much as a quart of oil in a 500 mile run.

The Shovelhead was designed with just 10 fins to cool the hot components. This made the engine run hot leading to overheating. In some cases it led to a complete failure of the engine. Low oil and high heat were a bad combination that caused valves to stick and run the top end. Serious modifications were needed to fix the problem as the average early shovelhead would only last for a range of 500 to 5,000 miles. The problem cost them a lot as the Japanese bikes surged ahead in popularity and dependability, at least until the Shovelhead issues were resolved.

Harley made the modifications necessary to bring the Shovelhead engine into a state of redemption prior to its retirement. By 1981 they had successfully relieved the issues. The Shovelhead was produced through 1984 before being replaced with the Evolution engine.

The Shovelhead didn’t get off to a good start, but it was in the end improved enough to become a reliable engine for the brand. The history of this engine and it’s story isn’t a bright and sunny one. It was a design that simply couldn’t hold up to performance expectations. After years of tweaks and redesigns, Harley eventually had a more reliable engine, but within just a few short years of achieving this goal, it was replaced by a new an innovative engine. The shovelhead has a rich history, but it’s one that is marred with dysfunction and frustration for the first recipients.