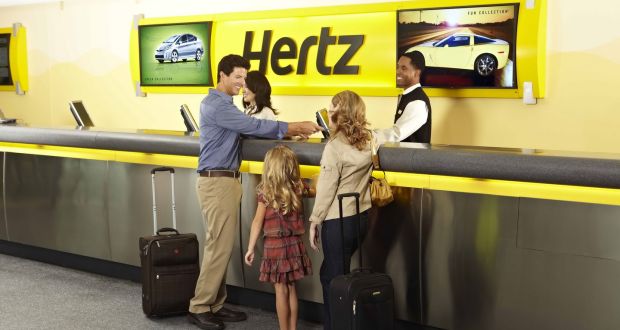 Hertz is an American car rental company that most people have at least heard about and many have actually used. It’s one of the larger corporations in the United States, but even though the name is familiar, there are still a great many things that the average American doesn’t know about it. Unless you’re involved in the corporation, there are some things that very few people know about them. The let everyone know more about the huge car rental firm, here are 20 things you probably didn’t know about Hertz

1. Hertz is not a stand-alone company

It would be easy to assume that because of its size and the popularity of Hertz, they are a stand-alone company. The fact of the matter is that they are not. The Hertz Corporation that is in charge of car rentals is actually a subsidiary of a larger parent company. They belong to the larger group that is called Hertz Global Holdings Inc.

Although the company was started in America, it has expanded far beyond the borders of this nation. In fact, Hertz has franchise locations open in 150 countries throughout the world. You can find the Hertz car rental company n operation throughout Latin America, Europe, North America, Asia, Africa, the Caribbean, Australia, New Zealand and in the Middle East.

Even though the Hertz Corporation is under the umbrella of Hertz Global Holdings, Inc., this doesn’t mean that it can’t acquire and hold ownership of several different businesses itself. In fact, Hertz owns Dollar and Thrifty Automotive Group. This includes Thrifty Car Rental as well as Dollar Rent A Car. Whenever you see one of these franchises, now you’ll know that they also belong to the Hertz Corporation.

4. Hetz is the second biggest car rental in America

Although not the largest in the U.S. Hertz is the second largest car rental company in the USA. It ranks seconds in terms of its fleet size, its sales and by the number of locations. The company is based out of Estero, Florida. It operates a whopping 9,700 international corporate and franchisee locations alone.

5. The Hertz Corporation is worth billions

Forbes has ranked Hertz Global Holdings which is the parent company of the Hertz Corporation in the position of 335th in the largest corporation in the United States as ranked by revenues. This ranking was assigned them on Forbes’ Fortune 500 list for 2017. The value of the Hertz Corporation at that time was estimated at $20 billion in assets with revenues of $4.48 billion. The corporation employs 37,000 people to run its operations.

6. The Hertz corporation started out under a different name

This company was founded in 1918 by Walter L. Jacobs. It was launched in Chicago, Illinois, the native home of Jacobs. It began as a small car rental company and it was first known as Rent-a-Car Inc. The company name would remain the same for only five short years before being changed to something else in 1923. As Rent-a-car Inc., the company began renting cars with a small fleet of just a dozen Model T cars manufactured by the Ford company.

By 1923, the Rent-a-car Inc., company had grown from a fleet of 12 vehicles to a large fleet of 600 vehicles. With such a large fleet in operation, the revenues also grew to an approximate $1 million per year in US dollars. The company was still owned by Walter Jacobs at this time. The owner of Yellow Truck and Coach Manufacturing Company, John D. Hertz became interested in Rent-a-Car. He purchased the company from Jacobs in 1923 and renamed it Hertz Drive-Ur-Self System. This was the second name for the company.

8. Jacobs remained active after the sale and outlasted the new owner

Even though Walter Jacobs had sold the business to John Hertz, he stayed on with the company until 1961, serving as its Chief Operating Officer and president. Hertz only kept the brand for three years before selling it to the General Motors Corporation in 1926. In 1943 GM also purchased all remaining shares left of Yellow Truck and Coach Manufacturing Company.

9. The company was the first to offer a charge card

While the business was under the ownership of General Motors, it released a rental car charge card. They were the first to do so and they implemented this in 1926. The company also oped the very first rental car location in 1932 at Chicago Midway Airport, offering yet another first with its one-way rental plan in 1933. This was another first in the industry.

Expansion into the world market has not been a recent thing for the Hertz car rental company. Although it was under a different name, it was very much the same entity, just under a different title. Their first international expansion was into Canada in 1938. This would be just the first of many such adventures that would lead Hertz yet further outside of the borders of the United States. They followed up with expansion into Europe with their first new location in France in 1950, followed by offices opening in South America in 1961.

11. John Hertz bought the company back

In 1953, John Hertz bought the car rental company back from General Motors. He made the purchase through another company that he owned which was called the Omnibus Corporation. After taking back possession of the company, Hertz gave the company a new name and it is the one that we are all familiar with now. It was renamed the Hertz Corporation. He moved the headquarters of the Hertz Corporation to Park Ridge New Jersey in 1988, from its previous location in Manhattan.

Adding to their already impressive fleet, John Hertz bought Metropolitan Distributors. He purchased the New York-based truck leasing company in 1954. It added an extra 4,000 trucks to the fleet which brought their total to 12,900 passenger cars along with 15,500 trucks. This was just one of the many expansions which the company would take under the leadership and direction of John D. Hertz, its namesake.

13. Hertz was bought by Radio Corporation of America

There were internal changes taking place within the Allegis Corporation and in the summer of 1987, an announcement was made by Frank A. Olson, the president and chairman of the company that the Hertz Corporation would be sold to the Park Ridge Corporation. The deal was completed in October of 1987 and the acquisition cost the new parent company $1.3 billion in USD. Throughout the various deals that were made in acquiring and selling the Hertz Corporation, we’re able to see a clear pattern that showed the increase in the value of the company over time. It was not only growing in size but also in revenue and in the value of its assets. It’s also important to note that the Park Ridge Corporation was owned by Ford.

The acquisition of Hetz by Park Ridge served its parent company, Ford, very well during its 18 years of ownership. A look at the books showed that as early as the second quarter of 2005, ten percent of the Ford company’s overall pre-tax profit was coming from Hertz which was a huge revenue producer at the time. Even though Hertz had been a valuable asset to Ford for nearly two decades, they made the announcement that the company would be sold yet again to a private equities group called Clayton, along with shares to Dubilier & Rice, to The Carlyle Group, and to Merrill Lynch Global Private Equity. The total value of the shares sold came to an amount of $15 billion. The business itself was valued at $5.6 billion and the remainder of the cost was the amount of its debt.

While being operated as a public group which became its status in November of 2006 under Clayton, Dubilier & Rice, the Hertz company made a deal for the acquisition of a UK company called British Car Auctions, aka BCA. The used car dealership was purchased from Montagu Private Equity, which is a London based equity firm, and they paid approximately £390 million to purchase the company. This had become standard practice within the industry at the top levels with companies buying and selling one another with great frequency. the Hertz Corporation, although owned by larger companies has in itself, remained a force to be reckoned with in the financial arena.

17. The fleet has changed in recent years

The variety found within the fleet of Herz rental cars is immense. The company maintains a generous stock of vehicles from several different manufacturers which include Mercedes, BYD, Cadillac, Volvo, Mazda, Infiniti, Jeep, Lincoln, Toyota, a and many others. This gives their customers a wide range of vehicles to choose from because one of the goals of Hertz is to maintain its popularity and they have to keep an edge over the competition in any way possible. Diversity is valued by discriminating customers and they do very well in offering a wide selection of vehicles.

A very famous name in the automotive design industry has been associated with Hertz. The famous Carroll Shelby was engaged by the company to develop an automobile exclusively for Hertz, of his modified Ford Mustang. Hertz had the objective in mind to attract a greater number of customers to the Hertz car rental program and they believed that a Shelby design would be the key to success in achieving this objective. Shelby designed a thousand of these specialty cars which were specifically designed to become rental cars for the agency. It was a good move, but it wasn’t the only special vehicle maintained within the fleet. Hertz also offered a program that they called the “rent a racer” program. It wasn’t available in every location, but those that offered the limited time 1960s program offered other models within the fleet including the AMC AMX, the Jaguar XK-E, and a variety of Corvettes. Hertz brought the program back in 2016.

19. Hertz also had a Green Collection

Another famous collection of rental cars launched by Hertz was their Green Collection. The program went live in September of 2006. Every vehicle in the fleet was certified to be friendly to the environment. Each featured Environmental Protection Agency highway fuel efficiency ratings that met at least a minimum rating of achieving 28 miles per gallon. A few of the models included were the Hyundai Sonata, the Toyota Camry, the Buick LaCrosse, the Toyota Prius and the Ford Fusion.

In addition to renting cars and trucks, Hertz also rents out heavy equipment. In fact, a division was formed for this in 1965. The first Heavy Equipment Rental location was based in Houston, Texas. This segment of the company was named HERC rentals and it became a publicly traded company in 2016.

20 Things You Didn’t Know about Quillbot

The 20 Best Beaches to Visit in South Carolina

10 Perfect Cocktails to Make for Halloween

A Closer Look at the MV Agusta Brutale 1000 Nürburgring

What is a Tanto Knife and When Would You Need One?

How Kim Cattrall Achieved a Net Worth of $40 Million