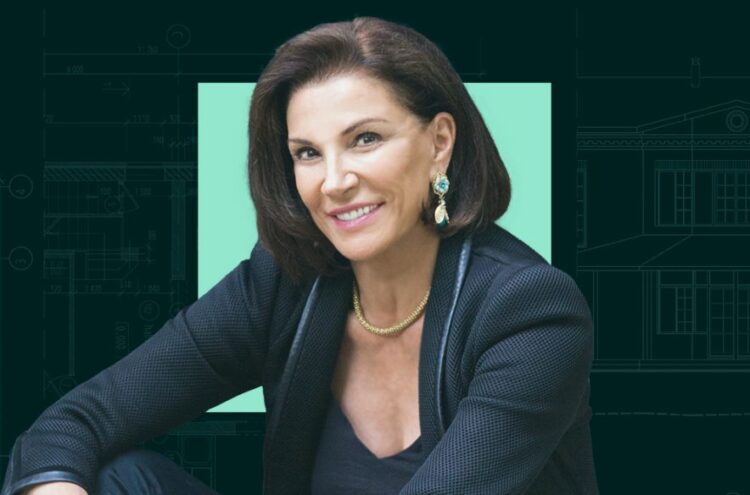 Hillary Farr is a popular name associated with the HGTV show – Love It or List It. Hillary was born on August 31, 1952, in Toronto, Canada, and grew up in London, UK. In addition to being an interior designer and a TV host, Hilary has been largely involved in several television series, such as Chris, The Marilyn Denis Show, Brother vs. Brother, Steven, and A Man Called Intrepid. In her personal life, Farr has one child with her divorced husband, Gordon Farr. Hillary Farr began her renovation career after moving to Los Angeles, where she started buying properties and renovating them. Her career as an interior designer rose to prominence after she was the co-host of the home improvement show; Love It or List It. As of 2022, Farr is 39 years old with three nationalities, namely: American, British, and Canadian. Here, we will discuss Hillary Farr’s net worth of $8 million.

According to Sportskeeda, Hilary Farr is divorced from Gordon Farr, a Hollywood writer, and producer. The couple got wed on September 12, 1982, in a private wedding attended by their friends and family. The pair had one child together. Unfortunately, the couple started experiencing marital problems and were forced to file for a divorce back in 2008. After divorcing her ex-husband Gordon, Hillary was linked to David Visentin, her co-star in the famous HGTV show Love it or List it. Raised in Ontario, Canada, Visentin is also a real estate agent, television host, and actor. Later on, there were rumors that the two were dating, but it was yet to be confirmed.

Hillary Farr was brought up in London, England. Since she was a kid, she loved to help her mother decorate their childhood home, which later led to her introduction to interior design for the first time. Hilary graduated from Ryerson University with a bachelor’s degree and moved to Los Angeles, California, to start her career as an interior designer. It was during her stay in Los Angeles that she began her acting career. Farr was featured in several films, including; Frustrated Wives, Legend of the Werewolf, City on Fire, The Return, Feel the width, Steven and Chris, Stardust, and the Rocky Horror Picture Show.

Hilary Farr began her career as an interior designer after moving to Los Angeles. There, she worked part-time jobs, bought various properties, and renovated them. Hilary also renovated and designed properties in the United Kingdom, New York, Toronto, California, and Australia. Her career as a professional interior designer was further improved by renovating homes for notable celebrities, including Jennifer Hudson’s apartment and Jenna Elfman’s loft. In 2011, Farr made several guest appearances at the Canadian International Interior Design Show, hosted in the cities of Edmonton, Vancouver, and Toronto. In June 2014, Hillary Farr was a design professional, and Amy Tara Koch, a journalist at the Art Van Furniture convection in Chicago, Illinois.

In 2016, Farr made her first acting debut in Ross Petty’s stage version of Sleeping Beauty, acting as the character “Malignicent” at the Elgin Theatre located in Toronto. Farr also made appearances in various television shows and films, including; Sex Farm (1973), The Return (1980), Legend of the Werewolf (1975), City on Fire (1979), Layout for 5 Models (1972), The Rocky Horror Picture Show (1975), and Mind the Quality, Feel the Width (1973). According to Country Living, Hilary Farr is best known for co-hosting the HGTV show – Love It or List It. In 2017, Hilary co-founded a real estate investment seminar, Rules of Renovation, held across various locations in North America. Moreover, Hilary Farr is the founder and CEO of Hilary Farr’s Designs, a famous brand all across the globe. She has also designed and refurbished homes of various celebrities, including Jennifer Hudson and Jenna Elfman.

What is Hilary Farr’s Net Worth?

Hillary Farr moved with her parents from her birthplace in Toronto, Canada, to the United Kingdom when she was still young. As a child, she aspired to be a ballerina but later discovered her great passion for designs and arts. Hilary also began acting in school and actively participated in the school plays. Her mother worked at ‘Liberties of London’, where the old yet gorgeous architectural sites of Great Britain influenced her decision to pursue a career in interior design. Currently, she owns an interior design firm – Hillary Farr’s Designs which has helped increase her overall net worth. Farr and her co-host, David Visentin, help renovate people’s homes to dream houses through their TV show. Because of the show’s unique content, it was dubbed one of the most-watched Canadian TV shows. Working at HGTV has also helped increase her net worth.

Since her childhood, Hilary has grown to be a very hardworking and effective woman. This is evident in her several appearances in movies under Hilary Labow, including City on Fire, Brother vs. Brother, Feel the Width, Stardust, The Rocky Horror Picture Show, Steven and Chris, Legend of the Werewolf, The Return, and other shows. Farr was also featured in numerous theater groups and stage performances and appeared in many drama displays. According to Cheatsheet, you can book Hillary Farr to speak at conferences, trade shows, conventions, etc. She charges an average booking price of $30,000 to $50,000 to host these events. Hillary Farr can live a comfortable livelihood with a net worth of 8 million USD. She earns an annual salary of $47,150. Farr also owns a Range Rover worth $36,350 and a two-story cottage in Deer Park, Toronto, Ontario, worth an average of $ 2,446,146.

A familiar name when it comes to HGTV, Hillary Farr is a host of the most-watched show, “Love It or List It,” which is co-hosted by David Visentin. The show is in its 14th season and continues to build people their dream homes through spectacular renovations. Although her birthplace is in Toronto, Canada, Farr spends most of her childhood in London, UK. Apart from her TV career, Hilary Farr is a successful businesswoman, professional interior designer, and a former actress known as Hilary Labow. She is also the CEO and co-founder of a real estate investment seminar known as Rules of Renovation.