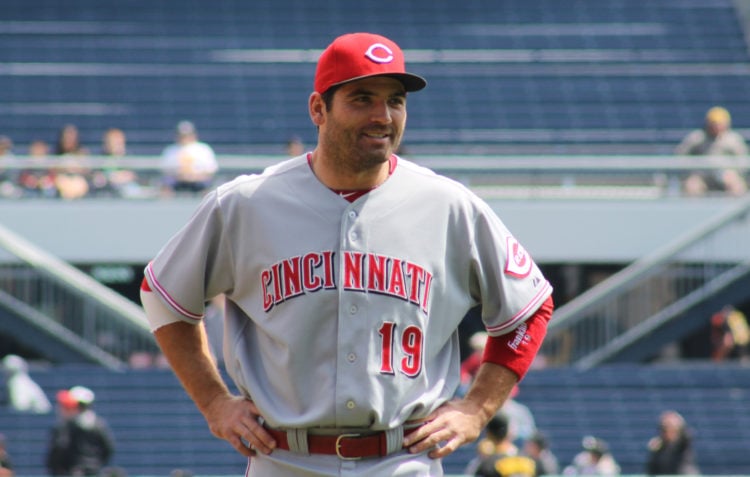 Joey Votto is a Canadian professional baseball player who plays for the Cincinnati Reds. This player has enjoyed a successful career in the sport, achieving many awards for his contributions to his team. As a result of his career in sport, it is now believed that he has a net worth of $100 million. Here is an overview of how Joey Votto became so successful and accrued this level of wealth. Votto was born in Toronto, Ontario, on September 10, 1983. His father was a huge baseball fan, and this probably impacted on Votto’s own passion for the sport. As a child, Votto’s idol was Ted Williams, and he had a poster of this baseball star on his bedroom wall. At high school, Votto demonstrated an aptitude for sport and he played in many school teams. Not only did he play for the Etobicoke Rangers baseball program, but he also played for hockey and basketball teams. When he left high school, he showed his commitment to playing college baseball as he signed a National Letter of Intent.

However, there was no need for Votto to fulfill this promise as he had already been selected by the Cincinnati Reds by the time he left high school at the 2002 MLB draft. He began his career by playing for the Dayton Dragons, which is the rookie-level affiliate of the Cincinnati Reds. Due to his success rate in his first season with the team, he was soon promoted to the Potomac Cannons. While playing in the minor leagues, he predominantly played first base, although he also made appearances as a catcher and an outfield. By 2005, Votto was playing for the Sarasota Reds and the following year, he had moved to the Chattanooga Lookouts. For both teams, he played consistently and made major contributions to his teams’ success rates. By the end of his time with the minor leagues, Baseball America had voted him as the minor leagues all-star and he also won the Southern League Most Valuable Player Award. In 2007, Votto moved to the Louisville Bats, before he was promoted to the major leagues in the same year due to his playing ability. Votto made his major league debut for the Cincinnati Reds in September 2007. By the end of the season, he was batting .321 with four home runs and 17 RBI.

After only a year of playing for Cincinnati Reds, Joey Votto was already one of the most popular players amongst fans, and they were keen to see him as the everyday first baseman. However, Dusty Baker was the new manager at that time, and he was a little more cautious considering that Votto was relatively new to the team. Despite the cautious approach of the new manager, Votto continued to prove himself throughout the 2008 season. 2009 was a less successful year for Votto as ill health forced him to sit out a few games. He suffered from ear infections, respiratory problems, and mental health issues. He sought the medical help that he needed for each of these issues and returned to the team after taking a break for one month. Unfortunately, he then suffered an injury that ended his season early. By the 2010 season, he was back to his previous form and was leading the NL in slugging and on-base percentage. Despite these statistics, he didn’t make it onto the All-Star roster. Fortunately, the fans voted him into the final spot, which shows the popularity of this baseball player with the Cincinnati Reds fans. During the 2011 season, Votto hit his 100th career home run and at the end of the season, he won his first Gold Glove Award. The following year, he extended his contract with Cincinnati Reds for a further 10 years in a deal allegedly worth $225 million. Despite the team’s confidence in signing him for this length of time, it was revealed that Votto needed surgery on his knee and he needed to take a four-week break during the 2012 season.

2013 was an exciting year for Votto as not only was he voted the Face of the MLB, but he also played for Team Canada in the 2013 World Baseball Classic. Things then took a turn for the worse as he was injured in the 2014 season and put on the disabled list. This led to him having a career-low in terms of his play statistics. On the plus side, Votto won his fifth Tip O’Neill Award during this season. Life continued to spiral out of control for Votto in 2015 when he was temporarily ejected from the team. This followed an incident where he had words with another player and then threw his helmet down in frustration following a strikeout. He was then suspended from the team again in the same season as the result of a brawl between the Cincinnati Reds and the Pittsburgh Pirates. Things began to take an upward turn for Votto professionally in the 2016 season as he achieved his second-best season average at .326. The following year was also successful for Joey Votto as he reached base multiple times in 20 consecutive games, which is the second-longest in MLB history. He is only beaten by his idol, Ted Williams, who broke the record in 1948 with 21. The following year, he was named to the MLB All-Star Game 2018, and he led the National League in on-base percentage for the third consecutive year.

It is now estimated that Joey Votto has a personal net worth of $110 million, according to sources. This fortune is entirely as a result of his career as a professional baseball player. His current, highly-lucrative contract with Cincinnati Reds means that he will continue to play for them and earn money as a professional player until at least 2024. While he has enjoyed great success in his professional life, he has faced some personal challenges. JockBio.com describes how he has struggled with depression and anxiety throughout his career. However, he has faced his mental health issues head-on and has always spoken about them publicly. This has given him the respect of fans and he has become an inspiration to millions who are also suffering from anxiety and depression.