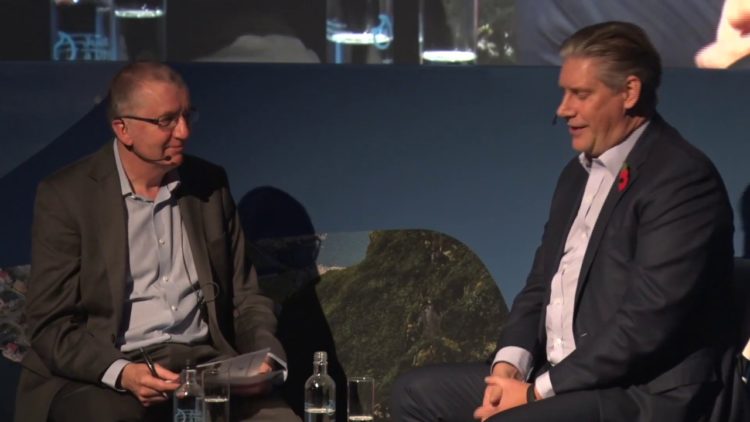 John Lundgren is a Swedish businessman serving as the current CEO of easyJet. For those who are unfamiliar, easyJet is a low-cost carrier based in the United Kingdom but operates throughout most of Europe as well as certain countries in the Middle East. In recent times, interested individuals might have come upon Lundgren’s name in the news because of a failed attempt by easyJet founder Sir Stelios Haji-Ioannou to oust him as well as other key figures. What Are 10 Things You Didn’t Know about John Lundgren? Here are 10 things that you may or may not have known about John Lundgren:

Lundgren was born in a small town called Härnösand that can be found in Sweden’s Västernorrland County. Its population can be measured in the low tens of thousands. However, Härnösand has a claim to fame by being the so-called “gate to the High Coast,” which refers to a stretch of coast that falls under the High Coast/Kvarken Archipelago World Heritage Site.

2. Wanted to Become a Trombonist

Initially, Lundgren wanted to become a trombonist. In short, said instrument was based on the trumpet, as shown by how the very name means “big trumpet” in Italian. However, it is interesting to note that trombone is a more modern replacement for the either French-derived or Spanish-derived sackbut that saw use throughout the Renaissance. This is because the sackbut fell out of use in England for a very long time before being revived in the 18th century, which was a time when Italian music was very influential. In any case, Lundgren became inspired to become a trombonist by listening to a Swedish trombonist named Christian Lindberg.

3. Studied at Stockholm School of Economics

Later, Lundgren took courses at the Stockholm School of Economics. In short, the institution was founded in 1909 because rapid industrialization had created an increased need for managers as well as other kinds of businesspeople. The Stockholm School of Economics has held true to this purpose ever since with the result that it has become one of the best schools in its particular field in Sweden and beyond.

4. Studied at the International Institute for Management Development

It isn’t uncommon for senior executives to jump between related industries. For proof, consider how Lundgren was involved in tourism rather than air travel before becoming the CEO of easyJet. To be exact, he worked for a number of organizations in the Nordic tourism industry before moving on over to Sunquest Vacations and then Tourism Union International. Considering the connection between the tourism industry and the air travel industry, it seems safe to say that plenty of Lundgren’s experience with one has proven to be useful for the other.

6. One of His First Duties Was Hiring a Chief Data Officer

One of Lundgren’s first duties as the CEO of easyJet was hiring a Chief Data Officer, which is a relatively new position compared to a lot of its counterparts that make up an executive management team. For those who are curious, a Chief Data Officer is responsible for overseeing the governance as well as the use of the information that an organization collects through its routine operations, which can be a very valuable asset in modern times to say the least. As such, they can be responsible for overseeing everything from data processing and data analysis to the trading of information.

7. One of His First Moves Was Creating a Holidays Business

Upon becoming CEO, Lundgren made the choice to sell more holidays through easyJet. Presumably, this choice was influenced by his background in the tourism industry, particularly since he entrusted the task of building the new business unit to one of his old colleagues from Tourism Union International.

8. One of His First Moves Was Creating a Loyalty Program

Besides that, Lundgren also created a loyalty program, which is something that a wide range of companies use to encourage customers to become repeat customers. Basically, marketing to consumers is both expensive and time-consuming, not least because interested parties are bound to get plenty of misses to go along with their successes. However, when companies manage to convince someone to buy their products and services, they know that said individual can be convinced to do so, thus making them a better prospect than random consumers. Moreover, if companies can offer outstanding customer service as well as otherwise make a good impression on their customers, they can stack the odds in their favor even more. Something that doesn’t just improve their chances of making a sale but also their profit margin from a successful sale because of reduced marketing costs.

9. Challenged Because of an Airbus Contract

Recently, Lundgren and other easyJet directors were challenged by the easyJet founder Sir Stelios Haji-Ioannou because of a contract contract for Airbus planes that were ordered in 2013. Haji-Ioannou sought to oust them because he believes that easyJet will run out of money if it continues on with the order, which can be blamed on the impact that the COVID-19 crisis has had on the air travel industry.

10. Has Made Moves to Reduce the Impact of the Order

Lundgren and his counterparts survived the attempt to oust them. It seems reasonable to speculate that their position was helped by their argument that easyJet needs the planes to replace their aging counterparts as well as their argument that easyJet would have to pay “significant compensation” for the discounts received on the 45 planes that have already been received. However, it should be mentioned that Lundgren has also sought to reduce the impact of the order by deferring the delivery of 24 aircraft through to 2022, which should strengthen easyJet’s cash flow in the near future.