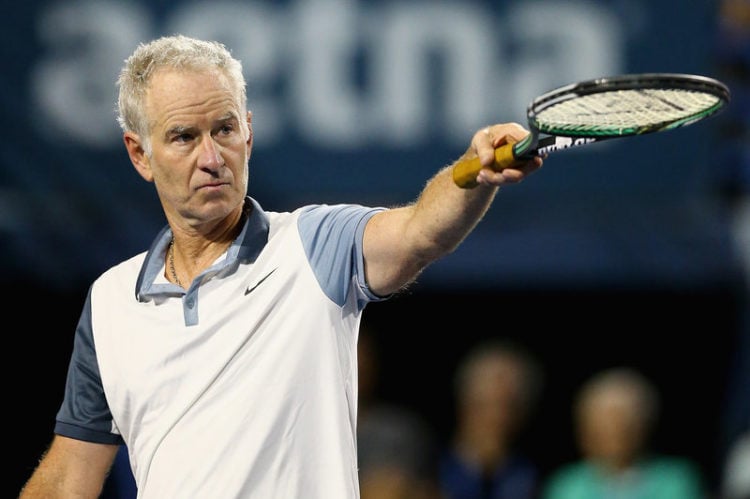 For people that are old enough to remember him playing on the court, his name is synonymous with sometimes questionable behavior as it is with outstanding ability. McEnroe always had a habit of confronting not only the other players, but also the officials and virtually everyone else involved with a particular match. If he didn’t like the way that a certain call went, you could bet that he would let his feelings be known and he didn’t make a habit of doing it in private, either. As a result, he was frequently fined by organization officials and at times, those fines could become rather extreme. Nevertheless, McEnroe did not apologize for his behavior because he felt that he was in the right. As years passed, he seemed to mellow quite a bit and closer to the age of retirement, he had mellowed so much that many people wondered if it was the same person they were looking at. Perhaps that bad behavior, as some people called it, was nothing more than a great deal of passion that had to find its way out into the world, to be expressed in one way or another. Whatever it was, he seems to have learned how to harness it these days.

As a matter of fact, he’s been up to quite a bit of activity since his retirement from professional tennis, not the least of which involves building what many would consider to be a bona fide business empire. Something that comes as a surprise to many people is that McEnroe has a definite love for the Arts. Maybe it’s because of his fiery temper or maybe it’s because of the enormous amount of skill with which he played professional tennis, but many people are surprised when they discover that he also has such an interest in the Arts. As a matter of fact, he’s always had an interest in music and has been longtime friends with a number of professional musicians, not the least of which include people like Eric Clapton and Eddie Van Halen. When he first retired from tennis, he decided to pursue those interests and formed a band, complete with a planned album. Unfortunately, that first album never really came to fruition but it did demonstrate that he had an absolute love for music and he felt the same way about many of the Arts in general as well.

After he decided that pursuing a career as a professional musician might not be the best course of action for him, he decided to dip his toe in other forms of the Arts and see how things went. As a result, he’s been in a number of television programs and movies, even if they aren’t exactly starring roles. More often than not, he has Cameo roles where he plays himself but that isn’t always the case. The point is, he has quite a few acting credits to his career and this is not something that should be taken lightly. It’s obvious when you watch him on screen but he has a love of acting and he brings that through with his performance, even when he’s only on screen for a relatively short time. It’s interesting to watch the same person that can play with such fervor and demonstrate so much passion, even to the point of erupting, show a completely different side of himself on screen.

As it turns out, he also likes artwork, and he likes it a great deal. It’s not at all unusual to see him paying a rather large sum of money for a piece of artwork. The twist here is that he doesn’t always put it in his house, but in a gallery that he owns. You see, he takes artwork that he really likes and puts it in there, available for resale. He also sells pieces that are made by himself and by close friends. While he certainly makes money from the art gallery, the overwhelming amount of money coming from this particular endeavor go to fund a tennis camp on Randall Island, something that he wants to do for those who are less fortunate.

So, the question remains. If he never actually produced that first album any stopped touring as a musician, how exactly did he create a business empire? Some of it has been through artwork and acting roles but the overwhelming majority of it has been through his true sense of business ability. He frequently shows up as a commentator around the world for tennis matches and he’s involved in a number of other businesses as well. The overwhelming majority of these businesses have something in touch with the Arts but not all of them. One thing is certain, he doesn’t invest in a business unless he feels like it has the capability to do well financially. This is reflected in the business empire that he has built in the years since his retirement. These days, he’s fully capable of basically living off of the interest produced by these business ventures, without ever touching the principal amount of money that they’re bringing in. That’s something that most people would very much like to imagine as their own reality, but very few individuals are able to actually experience it.

There’s no doubt that John McEnroe is taking the same approach with business as he did with tennis. He has learned what he needs to learn in order to do it well and he uses the same passion, skill and no-nonsense approach for all of his business ventures that he used when he was playing. It worked well for him then and it continues to work well for him now.