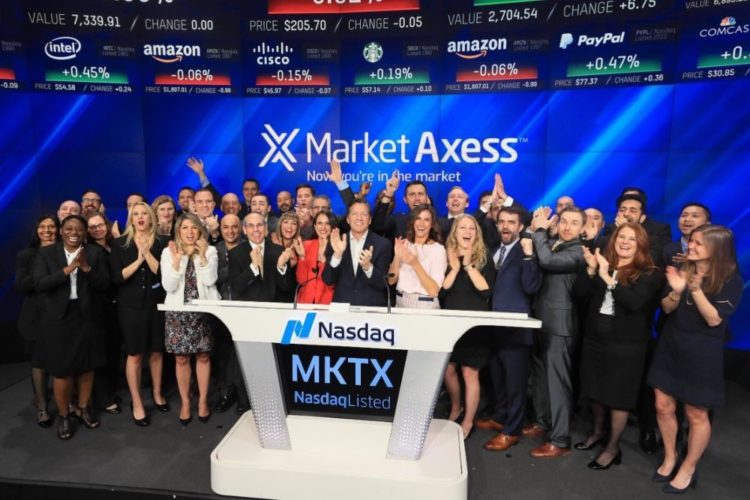 Brokers who deal in the fixed income markets rely on certain types of technology in the trading industry. With the advances made in technology, trading is done largely through an electronic platform. Institutional credit markets depend on the smooth operation of these systems to provide reliable service for their clients who avail themselves of this easy to use system. MarketAxess, also known as MarketAxess Holdings Inc. is a company that provides several necessary services for those who deal in bonds and other types of trading on the stock market. To acquaint you with the full spectrum of their services, here are 20 things that you didn’t know about MarketAxess.

1. MarketAxess has a solid history

This company was founded by Richard McVey, in 2000. As of 2019, it’s been in operation for 19 years and has become firmly established during its nearly two decades. McVey remains the Chairman and Chief Executive Officer for the New York-based company. The business employs 454 workers in totality.

2. They lead the market in US corporate bond trading

3. MarketAxess was inspired by a JP Morgan program

The first conceptualization for the services that MarketAxess provides resulted from one of JP Morgan’s research teams investigating the use of web-based technology for trading. It was called the Lab Morgan program initially. McVey is the genius who first proposed the model that would become MarketAxess in 1999. Within a year, McVey took the idea out on his own and he launched the venture independently to form the new company..

4. McVey raised the capital for the startup

It took a sizable amount of capital to launch the new MarketAxess. McVey had some serious promotion to do. He was able to raise $24 million in funding from several market participants. This would give them the necessary seed funding to proceed with the development of a few products to establish the business. There would be later rounds of funding for development of a more comprehensive line of technology products, but they were off to a good start.

Prior to the creation of the single electronic trading platform which covers a variety of trade types, investors were faced with a cumbersome means of gathering information and completing their trades. Since there wasn’t a single system to cover the different types of trades many would execute, it took a lot more time and effort to do. According to Crunchbase, investors needed a single trading platform which would offer access to several different dealers with competitive pricing over a vast array of credit products. This created more of a one-stop-shop in a user-friendly system which relieved much of the time-consuming steps previously required.

The company was established in New York, New York, USA and it began offering services nationally. Since then, it has expanded to include services for several different companies. They offer electronic trading systems all across the Americas, including North, South and Central America, The United Kingdom and other European countries, and Asia and the Pacific region.

7. Acquisitions of other companies fuel expansion

MarketAxess Holdings Inc has grown to become a dominant source for online corporate bond trading in the marketplace. They recently made the acquisition of LiquidityEdge, which controlled roughly five percent of the electronic Treasury trading. Bringing them into the fold under the parent company opened more of the market for US government bonds for MarketAxess. It’s a $16 trillion market so this was a wise move which set them even higher in standings. Executives negotiated with David Rutter, owner and founder of LiquidityEdge to make the purchase for $50 million in stock and $100 million in cash.

8. They serve a wide range of professionals in the industry

MarketAxess has a broad range of professionals who benefit from using their services. The users targeted as the audience for MarketAxess products are insurance companies, mutual funds, investment advisors, institutional investors, those who work with hedge funds and bank portfolios, public and private pension funds, primary dealers, regional firms and leading broker-dealers.

Trax is a London, England-based company which provides post-trade services and market data for their clients. In addition, they also offer regulatory and trade matching reporting. Wisely, MarketAxess acquired this company in 2013, to bring the host of services that they provide into the portfolio of the company in a move that served them well with regard to the expansion of the products being offered along with the territories that the company serves.

10. They partnered with Black Rock

Black Rock is known for its Aladdin platform, which hosts client assets in excess of ten trillion dollars. The partnership is intended to move MarketAxess into an “all-to-all” electronic marketplace. The agreement between the two giants in the industry was completed in 2012, giving Market Axess one more resource and service to add to their ever-growing range of product offerings.

MarketAxess evolved at a fairly fast rate, adding diversity to their portfolio of products and services. They added another feature as they began trading corporate bonds of investment grade. This gave investors yet more in terms of their access to new research and issues and in this business, information is requisite to make the best possible decisions.

Trading Edge Inc was a strategic acquisition made by MarketAxess. Trading Edge also owned a start-up bond company called BondLink, which aided investors in the online purchase and sale of bonds. This transaction took place in 2001, and what it amounted to for MarketAxess, was getting a two for one in terms of the level of expansion it provided for the growing corporation.

13. Shares are available for purchase

MarketAxess went public in 2004. At the IPO the stocks were valued at $11 per share. Following their launch in the stock market, MarketAxess launched its all-to-all trading marketplace which they called Open trading. They went on to expand the partnership with Black Rock which uses the Aladdin platform to reduce the costs associated with making transactions for participants in the European Market. They experienced a growth of 86 percent in daily trading volume after the expansion, over the prior year. Further expansion just two years later in 2017 included a new office in Amsterdam, The Netherlands. MarketAxess adn BlackRock followed with an expansion of their partnership services into Asia with a basis on the US dollar for sovereign and corporate bonds as well as other securities trading.

14. They offer the full picture

MarketAxess offers solutions that provide you with the full picture for trading. They do all of the hard work for you with information mapping that takes you back to the original transaction. This is a comprehensive view of the corporate bond market. This lightens the load by cutting down on the amount of time that it takes for research of multiple transactions and they offer all of the data that you need to compile a report or make an investment based decision. It’s truly an awesome provider for anyone who deals in the stock market.

We just recently learned that MarketAxess has made the interview with Rick McVey available in a podcast. This gives you easy access that you can listen to it at your leisure. McVey is the mastermind behind MarketAxess and he has so many useful tips and insights not only into the market but also into which solutions might be the best choice for you or for your agency.

In addition to all of the other products and services that they provide, MarketAxess also provides compliance solutions. These products are designed to provide you with the necessary reporting information so you and your agency remain in compliance with federal regulations. They offer a live testing environment. MarketAxess works through their subsidiary company Trax as well as EquiLend for joint securities financing transactions regulation solutions. Their live testing is not a milulation, but rather an environment that allows clients to find gaps in processes prior to the SFTR deadline. The requirements are a bit on the complex side, so in order to comply with regulatory changes, MarketAxess has developed a plan for staying on top of things so they don’t get out of hand as the deadline approaches.

Another technology niche that MarketAxess provides is Artificial Intelligence. The name of their AI-run pricing engine is CP+. This is an industry award-winning engine that took its third accolade recently. WatersTechnology.com readers selected MarketAxess for the Best Artificial Intelligence Provider award. This is quite an honor and distinction as there are several others out there creating competition. MarketAxess is making a habit of rising to the top in terms of popularity with consumers.

MarketAxess is gaining new clients on a consistent basis. They’ve currently exceeded 1,500 global institutional dealer and investor firms in their client base. Their recent Portfolio Trading solution cuts down on the overhead of these companies by decreasing the number of man hours required to perform standard functions and it allows them to improve their competitive pricing to gain relevancy with their clients in turn. Saving money and providing better client solutions is just one of the domino effects that MarketAxess can offer for new and existing clients. Their new solution allows for trade on spread and price at the same time, allowing for flexibility in negotiation for hundreds of bond types.

19. MarketAxess is revolutionizing the trading industry

Although they’re not the only service providers for marketplace technology, MarketAxess is one of the most prominent and dominant. At the rate of the expansion of their products and services, they’ve all but covered every aspect of the trading industry with a technology solution that makes operations run more smoothly and efficiently. In the end, it all comes down to dollars and cents for the bottom line. Investors, brokers, and all other stakeholders have come to depend on the reliability of the solutions offered and this is one of the many reasons why MarketAxess is becoming a popular choice for those who are aware of what they have to offer. The fact that the products and services they offer are so comprehensive, makes them a leader in the industry.

We’ve all seen major corporations come and go with the passage of time. Although it’s still a relatively new company with just short of 20 years to their credit, they’ve made an impressive run of it and they’re just getting started. So long as buying, trading and selling continue within the markets, there will be a need for their services. MarketAxess is a solid corporation that has taken its time expanding and by doing it the right way and making wise acquisitions, they’ve covered the majority of the bonds market as well as other securities with electronic solutions, report generation solutions and live testing to catch any gaps in processes in advance of the due date for reporting. They’re a full-service company and it’s likely that MarketAxess will continue to grow and will be around for some time to come.