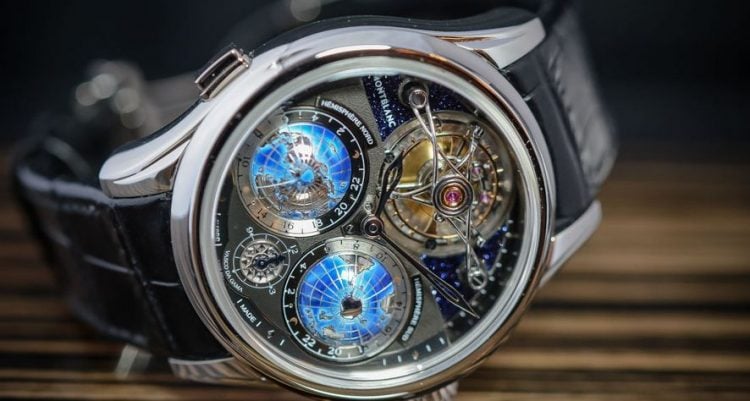 In 1906, two Hamburg-based folks, one a banker (Alfred Nehemias) and the other a stationer (Claus-Johannes Voss), joined forces with a Berlin engineer known as August Eberstein to produce fountain pens. Unknown to them, this “Joint Venture” would lay the foundation for the future of the internationally successful ‘Montblank’ company. In 1913, the unmistakable Montblanc rounded star became the brand logo, representing the snowy peak of Mont Blanc – the highest mountain in Europe.

In a sense, this symbolized the company’s commitment to the finest and highest quality European craftsmanship. In 2007, in a bid to preserve 150 years of conventional Swiss watchmaking, Montblanc joined hands with Minerva – a Swiss watchmaking company established in 1858.

With that in mind, here are our picks for five of the finest Montblanc watches you can buy today.

Introduced in January 2015, the Villeret Tourbillon Cylindrique Geosphères featured a new dial dubbed “Nightsky” and an 18-carat gold dial constructed in different parts and on various levels. The upper part of the dial, which is dark black and decorated with aventurine, mirrors the night sky and is the ideal backdrop for the watch mechanism with its convex, arcing tourbillon bridge. On the lower part of the dial, which is skillfully brushed in dark grey, there are two globes and a 3-dimensional compass rose that indicates home time. The hour-hand that orbits above that rose is similarly designed in a “three-way” shape. Only 18 pieces were constructed.

One of the most interesting aspects of the watch is the balance spring, which enables isochronal oscillations by restoring force to the equilibrium wheel. Originally, the spring was made from gold or steel. Today, it is made from temperature-resistant silicon or alloys and is cylindrical in shape as opposed to being flat. The cylindrical-shaped balance spring was preferred for marine chronometers and creating one was inspired by the desire to have a spring with a CoG (Center of Gravity) as close to the precise center of oscillation as possible. 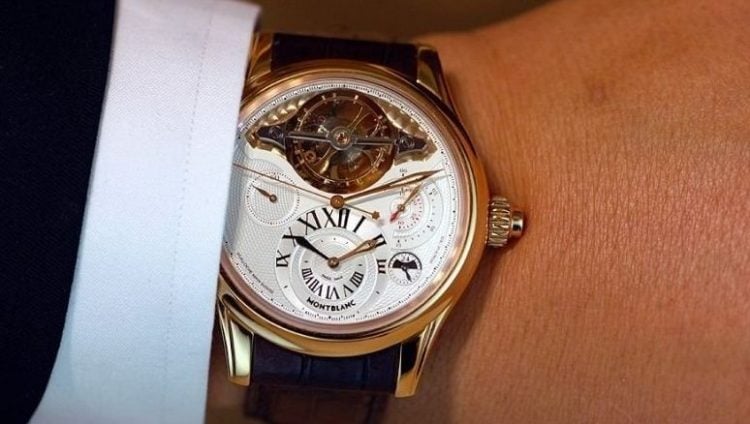 The ExoTourbillon Chronographe was the first watch to combine a chronograph and tourbillon function. It was also the first tourbillon in the world to have a balance that orbits outside the cage, subsequently leading to the moniker: ExoTourbillon. Due to the nature of the subassembly, the center of gravity of the balance-spring and balance of all mechanical watches is never actually collinear with the center of “axis of rotation” of the balance.

This off-centered state leads to a disadvantage when the timepiece is placed vertically. The ingenious ExoTourbillon mechanism was created to counter this problem, incorporating the balance within a cage that rotates continually around its axis. The watch is propelled by Caliber MB230, which was inspired by the Nicolas Rieussec Chronograph and features a single pusher (mono-poussoir) chronograph with a vertical coupling and a column wheel.

The column wheel is a more accurate way of actuating the chronograph functions and the vertical coupling is more efficient than the regularly used horizontal coupling. When completely wound, the two primary spring barrels on the automatic winding movement can store up to fifty hours of autonomy. But the show doesn’t stop there: there is a stop second function that breaks the screw balance directly via a small spring, allowing you to set the time accurately, to the second. When the Tourbillon Bi-Cylindrique was unveiled in 2011, it presented an exclusive innovation that differed in several aspects from anything modern ever created. Even if you brush aside the fact that it was the first wristwatch to feature a cylindrical double balance-spring and a tourbillon escapement, the timepiece also revealed the techniques and mode of operation of the iconic heures mystérieuses display. The new watch embodies the working principle developed at the Montblanc factory in Villeret.

It pays tribute to the brand’s first fountain pen collection, the popular “Rouge et Noir” series introduced in 1909. Indeed, the new timepiece, which is limited to only three pieces, was launched to celebrate one hundred years of Montblanc. It is powered by caliber MB M65.63, which functions at a frequency of 18,000 vph (2.5 Hertz) and can reserve power for up to 46 hours. Both of its complications are guarded by a rather spooky snake and contained within a large 52mm red gold case. The serpent’s scales have been handcrafted to deliver a life-like body. On the other hand, each part of the tourbillon (of which there are ninety five) is polished, hand-finished, and then decorated with traditional practices.

The Timewriter II was created in association with Bartomeu Gomila and presents a new approach of measuring time to an accuracy of 1/1000th second. The chronograph is propelled by a mono pusher, which is placed on the top side of the case (as opposed to in the crown), above the 12 o’clock mark. The purpose of the crown is to wind and set the watch when pulled out. You can power the main spring of the chronograph function by turning the crown counter clockwise.

The minute hand and central hour are used to display time and are visible on the tiny concentric Roman hour markers. Of course, the chronograph is the main star of the watch, and the design has paid particular attention to reading the elapsed time. There are 3 positions that regulate time, or perhaps four. The seconds and minutes are displayed on a single axis at 6 o’clock; the seconds are shown on the back ring with red and white markers while the minute counter can be seen from the interior white circle, recording up to fifteen minutes.

The big red central seconds hand is used to indicate the 1/100th seconds and is visible on the exterior track going from zero to 100. The red arrow at the dashboard-style display is used to indicate the 1/1000th seconds. As soon as the chronograph is halted, the red arrow relocates from the neutral (N) position to the real measured 1/1000th of a second. There is another indicator on the right side of the dial, which is actually the chronograph’s power reserve indicator. Due to the tremendous speed, the component of the movement uses plenty of power and has a power reserve limited to forty five minutes. Because of the accuracy with which this indicator measures power reserve, it can be used as a forty-five minutes counter as well.

At first glance, the tourbillon is the most striking feature in the Grand Tourbillon Heures Mystérieuses, occupying a significant part of the dial. This innovative mechanism, created to counter vertical positional off-centeredness in the balance spring, is a very demanding system that calls for the very best of skill and expertise. The exclusive design features and unique arrangement of the tourbillon sets this timepiece apart from the rest.

Positioned at the 12 o’clock position, the tourbillon revolves in its own case independent of the movement and consists of ninety five individual parts. It weighs 1.010grams and its cage, which is 18.4mm in diameter, comprises a gigantic balance with a 14.5mm diameter. It has a familiar frequency of 18,000bhp (2.5 hertz). The steel bridge is a work of class in its own right, represented in two horizontals overlapping figures of 8 that symbolize infinity too. All the steel components of the cage and bridge are derived from solid metal pieces and then masterfully shaped, polished and chamfered by hand.