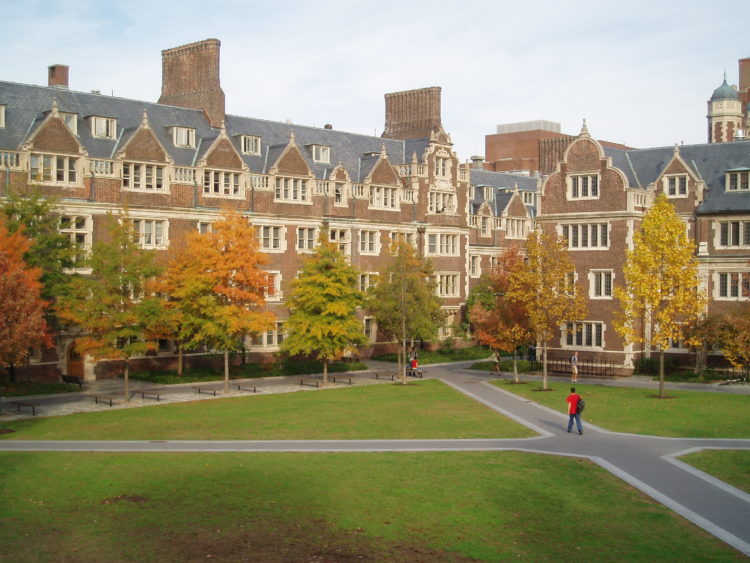 The University of Pennsylvania is one of the highest ranking educational institutions in the world. It’s an ivy league school which was established by Benjamin Franklin and it is the alma mater of countless successful professionals in the business world. Many of the graduates of the University have gone on to make significant contributions to the industries within their chosen fields. Here are 20 of the most notable University of Pennsylvania alumni.

Laura Alber attened the University of Pennsylvania and graduated with her bachelor’s in Psychology. She went on to become the CEO, President and Director of Williams Sonoma, Inc. She as appointed CEO and president in 2010 after previously serving the company in a variety of leadership positions before taking the helm of the company.

2. Harold McGraw III: President and CEO of McGraw-Hill Companies and chairman of the Business Roundtable

Harold McGraw III is a graduate of the University of Pennsylvania who went on to become the Chairman of the McGraw Hill Financial company as well as CEO in 1998. Prior to that, he served as the president and COO. He is also a director at the Phillips 66 company and formerly served as director at Conoco PHillips. he’s also an honorary chairman if the international Chamber of Commerce.

Anil Ambani hails from the country of India. He earned his MBA through the University of Pennsylvania’s Wharton School. He runs several business ventures including a Reliance Defense, which he owns, Rafael Advance Defense Systems of Israel and Dassault Aviation of France. he is currently worth $1.8 billion.

Doug Lenat is a notable University of Pennsylvania who went on to become one of the world’s most respected computer scientists. He is the CEO of Cycorp and founded the Cyc project, and is a highly recognized Fellow of of the Association for the Advancement of Artificial intelligence among may other honors. He’s also published several books on AI, Expert Systems building and large knowledge based systems.

5. Lewis E. Platt: President, CEO and Chairman of the Board of Hewlett-Packard during his tenure

Mr. plant is a U of Penn alum who served as the CEO and Chairman of the Hewlett-Packard company. He made significant contributions to the growth of the tech company during his tenure. He kept the company moving on a forward trajectory.

After completing his education at the University of Pennsylvania, Reginald H. Jones went on to work for the General Electic company. He joined the giant in 1939 in their business course where he would spend his entire professional career. he started out as an auditor visiting all of the GE plants, then became involved in management. The was appointed the CFO in 1968. in 1970, he became the vice president, and by 1972, he was made the president and CEO of the company.

After finishing his education with the University of Pennsylvania, Steven F. Goldstone went on to work a Davis, Polk & Wardwell in New York City. He is the former CEO and Chairman of RJR Nabicso, inc, and now manages the Silver Spring Group, private investment firm. He has served on multiple boards of directors including The Chef’s Warehouse, inc, merck & Co, ConAg.

C. Robert Henrikson graduated from the University of Pennsylvania in 1969 with his bachelor’s degree. He received his JD from Emory University in 1972. He started a long and successful career with the Metife Company where he spent 38 years. He currently serves as the CEO and makes a total of $6.31 million per year.

Mr. Roberts is the co-founder of the Comcast Corporation. He graduated in the class of 1941 with his degree from the Wharton School at the University of Pennsylvania. He led the Comcast company becoming one of the most respected executives within the business, enjoying a long and successful career during his life. he also engaged in community endeavors and he was an avid philanthropist helping others who were less fortunate during his life.

Leonard Lauder graduated from the Wharton School of the University of Pennsylvania. He went on to join the Estee Lauder company in 1958 and became the President in 1972. In 1982, he became the President of the company, and in 1995, he was appointed the Chairman. He co founded the Alzheimer’s Drug Discovery Foundation and serves as the chair.  He is also a member of several other important advisory boards.

George Lindemann graduated from the Wharton School of Business of the University of Pennsylvania and went on to become the CEO of the Southern union pipeline company. He also owned a total of 19 Spanish language radio stations and was named by Forbes as #722 on their list of billionaires. He was worth $2.4 billion at the time of his passing in 2018.

John Huntsman Sr. was a graduate of the Wharton School of business at the University of Pennsylvania. Mr. Huntsman knew what it was like to live in poverty but he had an entrepreneurial spirit that helped him to overcome the situation. He founded the huntsman Container Corp in 1970 and made a fortune in the process. He also founded the huntsman Chemical Corporation in 1982, then consolidated the companies that he owned. He was a billionaire with a heart who gave generously to those who were in need through his avid philanthropy.

Ronald Perelman is a University of Pennsylvania alum who became the CEO and Chairman of MacAndrews & Forbes holdings Inc. The corporation oversees a variety of interests including the Revlon, Inc, AM General, Scientific Games Corporation and several more companies. Mr. Perelman is also a philanthropist who supports a variety of worthy causes. He serves as the Vice Chairman of Carnegie Hall and established a Cancer Research program at UCLA.

Alfred Berkeley earned his master’s in business administration from the Wharton School of Business at the University of Pennsylvania in 1968. He went on to become the president and vice chairman of the NASDAQ Stock Market, Inc. After retiring in 2003, he became the chairman of e-Xchange Advantage Corp and also chairman of pipeline Trading Systems and he currently serves for both companies which are associated by subsidiary.

Warren Buffett attended the University of Pennsylvania for two years, prior to his transfer to the University of Nebraska. He is among the most notable alum of the institution as an entrepreneur, business man and investor who has achieved a net worth of approximately $86 billion. Mr. Buffet held a key position in the Buffet Falk & Co, business in the early 1950s, which he founded. He went on to form Buffet Partnership, Ltd in 1956 and he eventually became the president of Berkshire Hathaway, Inc from 1970 through the present. He is also known as a brilliant investor who made some wise choices in the market and built his fortune into the billions. He is the second richest man in the world.

Charles Butt is an alumni of the University of Pennsylvania who began working at the tender young age of just 8, as a bagger at his family’s grocery store. The family supermarket chain has gown to become a giant in the industry and the revenues now bring in over $19.4 billion annually. What started out as a small grocery store that was ran out of his grandmother’s house is now a multi billion dollar enterprise. After completing his education, Mr. Butt returned to the family business where he has made his career and he is currently the CEO and Chairman, and he is credited with building the company into the giant that it has become today with over 80,000 employees. His philosophy is simple. he pays people what they are worth and he doesn’t believe in offering the lowest possible wage. He’s gone on to become a multi-billionaire since his time at college.

Ms. Arnold is another notable alum of the University of Pennsylvania. She went on to occupy several impressive positions within the business world. In 2002, she became the Global Personal beauty Care and Global Feminine Care, and was the Vice Chair of the Procter & Gamble company from 2006 to 2007. In 2008, she was a director for the McDonalds Corporation until 2016. She was also a director of NBTY, Inc, as well as The operating executive of the Carlyle Groups, and most currently the independent lead Director of the Walt Disney Company as of March of 2018.

Elon Musk is an entrepreneur and native of South African who founded a variety of large and successful companies. He attended the University of Pennsylvania from 1992, earning first, a bachelor’s degree in economics, and directly afterwards, a second bachelor’s in physics. He is well known for founding the Space X company as well as Tesla motors. Through Space X, he launched a commercial space craft and has plans to continue forward with the development of technology in the aerospace industry that will make it possible to establish colonies on the planet Mars. He’s also credited with the development of Paypal, which he sold in 2002, making $20.2 billion, as well as the Zip2 company. He currently serves as the CTO and CEO of Space X and he’s also the Chairman of the board for Tesla Motors.

Phebe Novakovic is an alumni of the University of Pennsylvania. After completing her education, she joined the General Dynamics team. The company is an aerospace and defense business which is in the process of expanding the giant operation even further through acquisitions. Novakovic is the chairman and CEO of the company and is leading them through the purchases of useful companies in a bid to expand. She was appointed to this position in January of 2013. She is one of the leading female executives in the aerospace industry and serves as a role model for women who are aspiring to have careers in the field.

We conclude our list of the 20 most notable University of Pennsylvania alumni with John Sculley. John has had an interesting career. Mr. Sculley became the president of the popular beverage company, PepsiCo. This job proved his mettle and afterwards he joined the Apple team. When he came on board with the company in 1983, he was hired as their CEO and during his tenure, the Apple company’s revenues shot up sky high. Mr. Sculley was privileged to work with the late Steve Jobs and he shared that there was a lot that he learned from him.