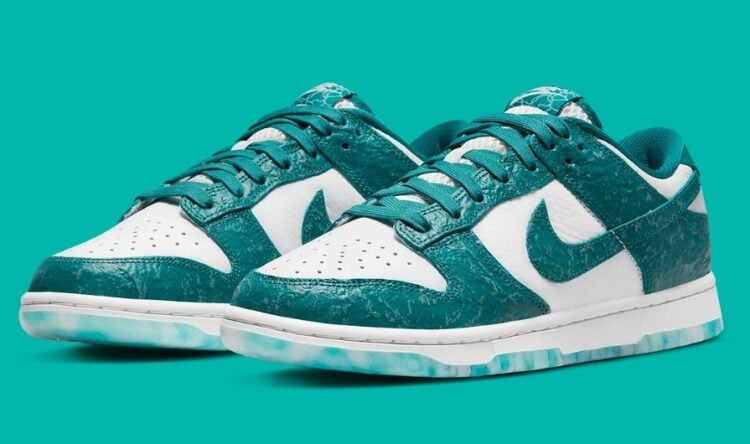 The Nike Dunk collection continues to amaze us as they introduce a new iteration of the 1985 model. The recent Nike Dunk Low ‘Ocean’ is a compelling collection worth a try. It features an incredible aquatic teal on the upper part. The sole has a translucent outsole that resembles the water bodies on earth. The shoe has leather material on the overlay made of a texture that mimics the ocean waves as currents crush against each other.

The Nike Dunk Low collection is a 1985 model from Nike. They continue to release the college theme Dunk high collection, which people love. Several series of lows collections have been released, but they are not as popular as the highs set. The Dunk collection is a mastery of Peter Moore, the designer of Nike Terminator, Air Force 1, and Air Jordan 1. These three elements are what feature the New Dunk high that we celebrate today. According to Hypebeast, the Dunk collection became popular in the 2000s, with Japan becoming the first country to popularize the shoes. From that time, the most famous dunk collections are released by co.jp. Over time, the shoes continue to evolve in different directions. Some designs continue to maintain their original design in terms of mold and shape, but other collections feature alternate forms and new materials.

For example, the Nike SB dunk is the original version of Dunk Low Pro and Pro B. The company later introduced the use of suede on dunk releases, and they became creative on the color releases. The popularity of the dunk continues to increase, but overall, research shows that it is on people’s radars. Recently, Nike has been releasing dunk collections made from different materials, and they have different looks. Nike Dunks fit true to their size depending on the year of release and the materials used in production for the fitting size. The newer the shoe, the stiffer it is, but it becomes more pliable as you continue to wear it. New Dunk shoes have a springier padding and a rigid material, while older collections are made from elastic materials, and they tend to use extra pillow padding. When it comes to size fitting, there are various factors to consider before concluding that Nike Dunks fit true to size. Older releases from 2010 and the previous years and new releases from 2016 and the subsequent years are half sizes down, and they are true to size.

The in-between releases from 2010 to 2015 are so stiff and if you want to save your foot from blisters, avoid the half size down. A general rule in shoe selection is the more rigid the material like stiff synthetic leather and patent leather, the more the possibility of the shoe being true to size. Shoes made from thinner leather and other pliable materials like half size down and suede are likely to give a more exact fit. A pair of dunks is also comfortable since tremendous technological improvement has occurred since the mid-1980s. The upper part of the shoe is more pliable and comfortable. The midsole and strip of rubber are also improving.

The new Nike Dunk Low “Ocean” features two colors; white and aquatic teal. Both colors are bright and cool. The latest release will have a white leather base characterized by texturized overlays endowed with blue resembling ocean waves. Additionally, the shoe will have a water-themed tongue, water mesh tongues, and a white midsole. The outsole will be translucent with a marble-like finish. We are unsure whether these features have a deeper meaning besides the colorway and the material. According to Solecollector, it is still a mystery because there have been serious discussions about the environment and the precautions that the global society can implement to preserve natural resources like oceans. Several Netflix documentaries feature topics on ocean plastics, ocean conservation, and overfishing by inhabitants. These are sensitive topics that have recently gotten mainstream attention. Nike is likely to join forces with the rest of the world to encourage people to conserve the environment, and there is no better way to do that than to release Nike Dunk Low “Ocean.” As it stands, Nike has not announced the release of Nike Dunk Low “Ocean.” Nike Dunk enthusiasts are eagerly waiting for the release date. They anticipate that it will first be released on SNKRS and selected retailers in the coming months.

The new Nike Dunk Low is expected to retail at $100 once it hits the market in 2022, but there is no mention of the specific release date. You can buy it from selected retailers or order it from the Nike website. According to Sneakerbardetroit, Nike Dunks are expensive because of all the celebrity hype. Almost every celebrity owns a pair of the debut Nike Dunks. There is also the issue of limited availability of the collection and the problem of resellers who purchase the shoes in bulk, creating artificial inflation that causes the boots to be costly and rare. There are also new Nike Dunk releases available on the Nike official website. You can also buy them from online stores like Amazon or SNKRS. If you cannot hit it for retail price, you can try aftermarket sites like Goat and StockX, which are pretty helpful.

Many Nike Dunk fans are skeptical about the Nike Dunk Low “Ocean” release because Nike Dunks usually shoot up in price, and the Ocean version is no different. Nike enthusiasts speculate that the price is likely to hike after the set release date.