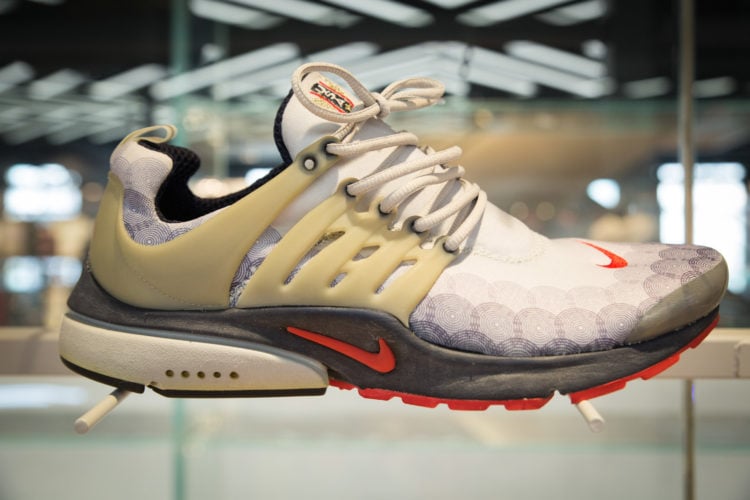 The sneaker world has always been a strange place, especially in the year 2000. Most sport shoes, from around that period, were going for a kind of futuristic approach. Think of the Adidas Kobe, the Nike Air Flightposite, and the Air Jordan XV. These are a few examples of the sneakers available from that time that were very different from the ones produced before them. This futuristic and unprecedented design did not just apply to basketball players during the Y2K era, as you can see through the Nike Air Presto. For sure, there might have already been the idea of the Air Flow and the Sock Racer in play, but the Nike Air took these ideas to a whole other level. The Nike Air Presto was famously promoted as a t-shirt for your feet, and that is precisely what they proved to be – right to the unisex sizing system used. Additionally, just as in t-shirts, the shoe was available in a wide plethora of prints and colors, thus becoming the pioneering shoes in as far as graphic prints of shoes is concerned. Since the Nike Presto, the simplistic, sleek, and comfortable design has become a bonafide requirement in all classic sneakers. With the shoe poised to make a comeback again this summer, we thought we should take a small look at this great release. Continue reading to find out more about the Air Presto.

A Pair is Available

The Nike Air Presto paved the way for the newer Nike Free, but it has not enjoyed as much love as you would expect over the past few years. Save for some scattered reiterations, the Air Presto has been quiet. This is a surprising twist of events because the model, which was designed by Tobie Hatfield – Tinker Hatfield’s younger brother –, is able to earn some positive remarks when it makes an appearance. One forgotten Air Presto design might never see a release, but it is worth revisiting the whole story behind it. Eric Clapton, in 2001, decided to make a world tour, and while he was still in the middle of it, Nike offered him the Air Presto limited edition. Up until this point, most people do not remember the musician’s exclusion design version of the shoe, but a pair has been made available. An Australian native Nike Presto collector, Leon Witherow, who administers @prestology – an Instagram account – and currently works in the Netherlands as a Nike representative, recently unearthed one of his Clapton Air Prestos, which had been signed by the main man himself. According to Leon Witherow, he was only able to track down where the Prestos were after about seven years of active hunting. In a summarized manner, he says that Eric Clapton signed the pair of shoes before they were auctioned off for charity reasons. The earnings made from the auction were directed to the Crossroads Foundation at Eric’s request. At one point, the pair of shoes was in Japan, where they were sold off for about nine hundred US dollars. After a few years, the pair again surfaced at a motorcycle dealership in Japan. From that point, the shoes ended up on eBay, and that is how Leon was able to purchase his pair. The rest, of course, is history.

A Brief History of the Air Presto

Tobie Hatfield, back in 1996, had traveled to Korea to attend a production meeting. He, reportedly, did not like the shoes he was wearing. Every member present in the meeting had a brand new pair of sneakers to try, but as Hatfield did not like the ones that had been assigned to him. That moment inspired a four-year journey that would result in him creating Nike’s most innovative pair of sneakers: Air Presto. In the beginning, what Hatfield hoped to achieve was quite straightforward: come up with a pair of shoes that was comfortable and fitted immaculately. However, that was not an easy milestone to accomplish, given how Nike was designing sneakers at that time. Other sneakers released in the past, like the Huarache, that had been constructed and designed unconventionally were limited in their use due to their constraints of mesh, leather, and stitching. Eventually, the Presto would prove that these conventions were long overdue. The Air Presto did not adhere to these norms, but this required that Hatfield and his aides tried so many other possibilities before they created a path into the future.

The name Presto was not even attached to the project until 2000. Back in 1996, however, Nike had created a prototype: an unremarkable mesh and leather sport shoe. This prototype, in all its mediocrity, had one standout feature: the V-notch. Hatfield had hoped to fix the shoe he had won in Korea by merely removing some excess material. In this light, he cut out a section of the sneaker from the sole to the collar, thus allowing the upper part to move in different ways. With this invention, the shoe was more flexible to move and bend with every stride and step. As opposed to the runner’s feet being caged in a rigid structure of mesh and leather, the shoe could easily respond to movement. With this kind of construction, Hatfield had made a shoe that did not conform to traditional sizing standards. A size nine Presto shoe, given its flexibility, could also fit a size 11 foot. Hatfield thus considered this design to be similar to apparel – a t-shirt. This new thinking resulted in a significant paradigm shift in the way Nike sneakers were sized. The Nike Air Presto was created out of the desire to solve problems that a few people could see: poor design conventions. The solution, which took about four years to come up with, solved the problem so well that we do not remember that such issues existed. If you take a look at the shoe, you will see just hard and complex the answer was, or we can just put them on and take a jog.