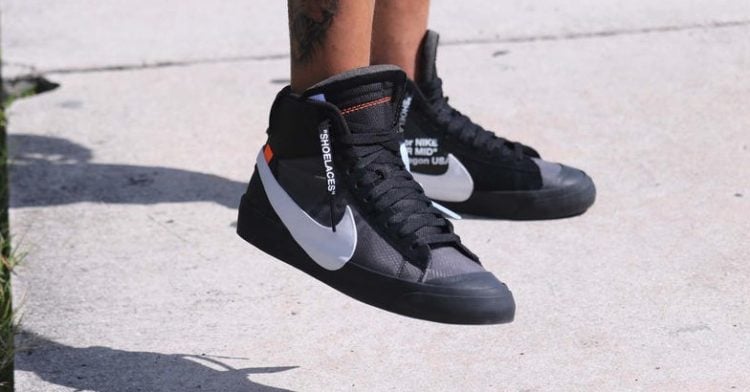 1. The Off-White brand is a Virgil Abloh design

For anyone who hasn’t been following the nitty gritty of the origins of the Off-White Nike Blazer Grim Reaper, it’s a collaboration between famous designer Virgil Abloh and Nike. They’re big into collaborating on their special editions and this is just one of the things that makes them so very special indeed.

That’s right, the new Grim Reapers, as if you couldn’t tell by the name are a Fall 2018 edition with October’s Halloween theme built into the design. You won’t see any scary pumpkins or vampire bats on them though. Those details are being left strictly up to the imagination. The Grim Reaper is a Black colorway and it’s entirely suitable for wearing with your favorite Dracula costume if you’re a guy. A companion was also released in a cream and orange that they call the “All Hallows Eve” edition. It’s so nice that they released the two complementary models at the same time.

In case you haven’t checked them out yet, you can get your pair wherever Nike is sold for $130 a pair. They were released on October 3rd. If your favorite retailer is out of stock, we apologize, but you can easily find a vendor that has them in stock online. We’re urging you to watch the prices though. Some retailers offer them at prices a lot higher than the suggested manufacturer’s retail price. Sometimes it pays to be patient and wait for the next shipment to come in.

4. The Hyperanalyzer puts them at a higher value

Recent results from checking the overall demand of the new Nike Blazer Mid Off-White Grim Reaper show that there’s a high demand for the shoe with what they refer to as the heat level at a .96 when it comes to overall demand. The Deadstock price in a snapshot in time was holding firm at $494 a pair and the market value is at $351. Although the retail price is at $130 a pair, it’s not unheard of for them to go for almost $500 during peak demand times when supplies have been sold out.

5. If you have a pair you can consign them

There are sites on the internet that offer a venue for owners of the Grim Reaper to consign them for sale. They go for a higher price if they’re pristine and new in the box. Although it may be cool if you have a pair that were purchased for you in the wrong size, we can’t imagine that many people are going to be selling theirs any time soon if at all. Anyone that thinks the regular retail price is high should scout around the internet a while. They’re being offered in many places for $350 for a brand new pair, but one site, in particular, takes the lead. The highest price we’ve seen them going for yet is on Fight Club at a whopping $560.

7. There are still raffles for the Grim Reaper opening

There have been tons of online raffles for the special Spooky pack for the Nike off-white blazer which includes a pair of the All Hallows Eve and the Grim Reaper. Sole Retriever has an extensive listing of the closed raffles along with announcements of new ones that are going to be offered in the future.

8. The Swoosh is bigger than ever

The new Grim Reaper has been released with an oversized swoosh. It is placed in the traditional place along the sides of the shoe but this time it’s bigger than ever. There’s no mistaking the brand with the icon making a bold statement across the sides.

9. The Swoosh wraps around the back of the shoe

The amazing bright white swoosh makes an attractive sweep around the heel of the sneaker. It adds a nice contrast to the black upper. This is one of the most distinct Black Nikes ever made.

If you don’t believe us, just ask the designer. The intent of the shoe is to purvey a Halloween aesthetic complete with the scary thematic black and white colors. When you view it from this perspective, you can understand why it’s described in these terms.