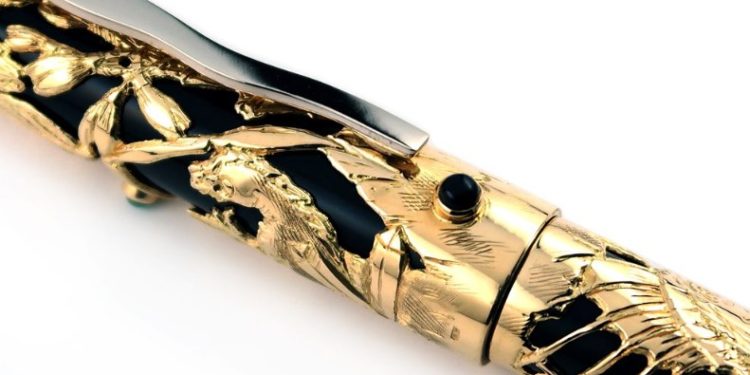 Pens- everyday staples we all use, rarely think about and wouldn’t consider spending more than a dollar or two to own. Or so you thought. In fact, pens (or at least, certain kinds of pens) can fetch higher prices than most of us would contemplate laying down on a car (we’re taking 5 figures or more). Don’t believe me? Then consider the Omas Gaia High Luxury Fountain Pen. Anyone who fancies getting their hands on one of these beauties had better have a generous salary- with an average retail price of $40,000, they’re going to need it. If you’re wondering how a pen can be so expensive, you’re in the right place to find out….

If we’re going to consider what makes a lowly pen capable of fetching the not so lowly price of $40,000, we need to first consider who made it. Name, after all, is everything (well, if not everything, then at least something- especially if that something is worth more than most of us make in a year). So, who exactly is Omas, and what makes their products special enough to demand such huge sums?

From the time of its foundation until its liquidation in 2016, OMAS was renowned for producing some of the highest quality (and highest priced) writing equipment, fountain pens, and inks in the world. OMAS (or Officina Meccanica Armando Simoni to give it its full title) was founded by Italian Armando Simoni in 1925; along with establishing the brand, Simoni was also responsible for the design and creation of the specialist equipment and tools that went into the manufacture of its products. Throughout its 91-year history, the brand released multiple revolutionary new designs onto the market, including the “Doctor’s Pen” and the 361 model: an innovative tool that worked as a hard writer in one position and a flexible one in another.

Omas went through several different hands in its time (including LVMH from 2000 to 2007, the Xinyu Hengdeli Group from 2007 to 2011, and the O-Luxe group from 2011), but despite the many changes and a decline in profitability in later years, Omas never ceased to be regarded as one of the most luxurious (and desirable) brands on the market.

The primary reason for its status owed to the craftsmanship that went into each and every pen: unlike the mass-produced ballpoints of the world that take a minute to make and a second to break, Omas creations were designed to stand the test of time. Each individual piece could take upwards of a year to make, with only the most superior of natural materials, such as cotton resin, celluloid, wood, titanium, gold, and silver, going into their creation.

OMAS went into voluntary liquidation in January 2016- however, like a phoenix from the ashes, it rose again in 2018 when Italian penmaker, Ancora, announced it had acquired the OMAS name. To the delight of fans, production began again that same year, using the same classic models and materials for which OMAS had been so renowned.

So, we know from the above that Omas is a good brand. We know from experience how hobbyists can be fanatical when it comes to their collections. Just how fanatical depends on both their collection, and what they want to add to it. If we’re talking a highly prized, exquisitely crafted, stunningly designed pen with only 30 pieces in existence, we’re taking very fanatical indeed- hence, no doubt, the startling price tag.

Leaving aside its price for one second to look at the pen itself, it’s easy to see why it commands such attention. Its design takes inspiration from the Jules Verne novel, A Journey to the Centre of the Earth. Verne’s celebrated work tells the story of a German professor (Von Hardwigg) who becomes convinced of the existence of volcanic tubes that travel to the earth’s core. The intent of exploring them, he sets out on a fantastical journey with his nephew Axel and travel guide Hans. Along the way, the trio stumbles upon realms of prehistoric beasts, mystical elves, and dangerous wonders. With this theme in mind, Omas has designed the pen to take us on a geological descent through a world of giant spiders, carnivorous plants, and mystical beasts, right into the earth’s center, an ancient, underground world of jewel-carrying elves and tiny, dragon-winged sprites. Representing the center of this mystical world is a ball of iron pyrite, while at the top, a rock crystal sits encased in four jaws, representing the earth and its four cardinal points. Overlooking the fantasy and concentrating on the reality, at least for a second, what we essentially have is a midnight-black center made of Omas “Gaïa Grey” vegetable resin, enrobed in 18k white and yellow gold. Scatted across its surface are a number of exquisitely cut, expertly placed embellishments in crystal, onyx, hematite, emerald, and diamond. The fountain pen is finished off with a bicolor nib of 18k gold.

It may have already been mentioned, but some things bear repeating- and when that thing is a $40,000 price tag, it deserves a serious amount of discussion. That said, the Omas Gaia High Luxury Fountain Pen is by no means the most expensive pen on the market- that particular distinction is held by the Aurora Diamante, which would blow even Rockefeller’s budget at $1,470,600. Plus, unlike the Aurora, all Omas Gaia High Luxury Fountain Pen’s come with a free set of ink and paper – I’d call that a bargain.