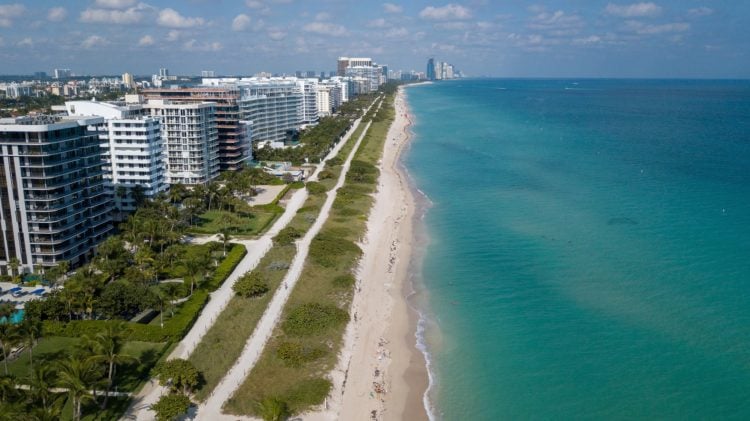 Florida is one of the wealthiest states in the USA. The state has a $1 trillion economy. It’s home to a great climate and many of the wealthiest cities are on the shores of the Atlantic Ocean or the Gulf of Mexico. Florida is home to many businesses, celebrities and Presidents. The southernmost state has many wealthy cities with most of them near Miami.  Here are the 20 richest cities in Florida as of 2019.

Miami is located in southern Florida along the Atlantic Ocean. Greater Miami covers 56 square miles and has a population of more than 6 million. It is the sixth most densely populated city in the USA. Miami has several different sections, but the main business center has a population of 5,800. The average income per resident is $34,901. The average house price is $366,000. Miami is known for its tourism and business. It’s the home of several professional sports teams. There are great beaches and fun nightlife.

Sunny Isles Beach is a resort community located on a barrier island in northeast Miami-Dade County. The city is located between the Atlantic Ocean and the Intercoastal Waterway. It’s known for its beaches and water activities as well as its 1/2 mile long pier. The average income per resident is $45,972. The average value of a home in Sunny Isles Beach is $845,000. The population is 20,000.

Miami Beach residents have an average income of $50,193. The average house value is $845,000. The population is 92,000. The beach city of greater Miami is a popular vacation destination. South Beach is 2.5 square miles and has a vibrant nightlife, outdoor dining, shops and art galleries. It’s well known for its Art Deco architecture in the city’s historic district. Miami Beach was once rundown but became the home to many wealthy people. Miami Beach was featured in the 1980’s television series “Miami Vice” and movies including “Scarface” and “The Birdcage”.

West Miami is the western most part of the greater Miami metropolitan area. The average income per resident is $51,362. The average cost of a home in West Miami is $475,000. The are is just .7 miles and has a dense population of 6,000. Like the rest of Miami, the city is a popular tourist destination and is home to several businesses.

North Bay Village is located on the Biscayne Bay near Miami. Once mostly under water, the area was dredged in 1940 creating Harbor Island and Treasure Island. The city was incorporated in 1945 and became a winter home to many wealthy people. Today, residents live mostly year round. There are several high rise condominiums located on the Bay and its Marina. The average income of a resident of North Bay Village is $55,308. The average home value is $256,000. The city is just over .7 square miles and has a population of 6,700. North Bay Village is the headquarters of the television station WSVN-TV.

The city of Marathon, Florida is located on the Gulf Coast in the southeast section of the state. It was named by railroad workers who worked night and day building the East Coast Railway. The city is made up of seven keys including Knight, Boot, Vaca, Fat Deer, Long Point, Crawl and Grassy. The islands’ many marinas are a favorite for sports fishers. The entire city is 9.6 square miles and has a population is 8,600. The average income per resident is $55,890. The average house value is $460,000.

Aventura is a wealthy Florida community located inn the northeastern section of Miami-Dade county. The average income per resident is $57,388. The average house price is $320,000. The population of the city is 30,027. Aventura is Spanish for “Adventure”. Its the name of the company that originally developed condominium communities in the city. Aventura is known for its Aventura Mall.

Key Largo is the first key reached when leaving the Florida mainland. The key is a popular tourist destination. Known for its reefs, snorkeling and diving are big hobbies on the island. Fishing and boating are also popular hobbies. Many companies offer diving excursions and there are glass bottom boat tours. Key Largo is famous for the John Huston directed film “Key Largo” that starred Lauren Bacall in 1948. There are many wealthy residents living on the island. The average annual income of residents is $58,139. The average cost of a home is $650,000. The population is 10,500.

Marco Island is a part of the Naples-Marco Island southwestern Florida metropolitan area. The city has a population of 16,500. The average income per resident is $59,670. The average value of a home in Naples is $580,000. The city is an island, the largest of the barrier Ten Thousand Islands located in Cape Sable in the Gulf of Mexico. Ferry service began from the mainland to Marco Island in 1912. A wooden bridge was built in 1938 and was replaced in 1975.

Key West is the southernmost part of the United States of America. It is the westernmost island of the Keys off of southern Florida. The island is just 4 miles long and 1 mile wide and has a dense population of 25,000. Popular areas include Casa Marina and the historic district of Old Town. Once known as the “Winter White House”, Key West was the winter home of several Presidents of the USA. Ernest Hemingway and Tennessee Williams also had homes on Key West. The average price of a home on the island is $850,000.

Naples is a part of the greater Naples-Marco Island. It is one of the wealthiest cities in Florida with many millionaires residing in the city. The average income is $66,048. The average house’s value is $770,000. The population is 19,500. Located in eastern Florida, Naples is bordered by the Bay of Naples on the east and the Gulf of Mexico to the west.There are several marinas in Naples which is popular with boaters. Close to the Everglades, Naples is a popular destination for ecotourists.

Surfside is a beautiful resort town located in southern Florida. The town is a popular tourist destination and has several rentals within walking distance to great shopping and restaurants. The beaches in Surfside are great. The average income is $72,266. The median house price is $650,000. The population is 5,600.

Key Biscayne is one of the wealthiest communities in greater Miami. The average income per resident is $79,262. The average cost of a home is $1.5 million. The population is 12,300. Key Biscayne is south of Miami Beach and east of Miami. It began to develop once a 4 mile causeway connected Key Biscayne to Miami. Richard Nixon had waterfront homes in the city, and some called it the “Florida White House”. There are several condominium complexes as well as five star hotels including The Ritz Carlton Hotel, The Ocean Club and The Grand Bay.

Coral Gables is a wealthy suburb located southwest of downtown Miami. The average income per resident is $96,887. The average cost of a house in the city is $680,000. The population is 51,000 and the land area of the city is almost 13 square miles. Coral Gables is considered a pedestrian friendly town. The business district is just 2 miles long. In the 1920’s $100 million was spent to develop the city. It was developed with Spanish Renaissance style architecture. The planned community still has strict zoning regulation.

Miami Shores is a mostly residential village and a suburb of Miami’s greater metropolitan area. The city was home to a starch mill in the early twentieth century. It was developed with housing by the Shoreland Company in the mid 1920’s. Located on the shores of the Atlantic Ocean, Miami Shores was called “America’s Mediterranean”. There are 6.4 square miles of land and a population of 15,000. The average income per resident is $101,047. The average price of a home in Miami Shores is a half million dollars.

Southwest Ranches is a mainly residential contract town located southwest of Fort Lauderdale. There are also some small farms, and several equestrian ranches. The city has several parks being developed and one completed equestrian park with multi use trails, a horse schooling ring and a horse showing ring. There’s also an art installation that features drinking water for the horses. It’s called Equestrian Oasis. The average income is $101,198. The average house price is $585,000. The population is $7,900.

Palm Beach is one of the wealthiest cities in Florida and in the United States of America. The average income per resident is $115,050. The average cost of a home is $490,000. The population of the 18 mile barrier island is 8,300 that faces the Atlantic Ocean. The city was named after a ship wrecked near the island, and it was carrying coconuts. Palm trees were planted, and they are now some of the tallest coconut palm trees. Palm Beach is home to several luxury resorts and a popular place for northerners to spend their winters.

Palmetto Bay is the third wealthiest city in Florida. The average income per resident is $115,476. The average value of a home in the city is $630,000. The population of the city of 8.8 square miles is 23,500. The Miami suburb is home to local television and radio stations. Burger King once had its headquarters in the city. The large building is now used as office space for many businesses. The Charles Deering Estate is the city’s cultural center and holds several cultural arts events.

Parkland, Florida is located in the southeast of the state. It is a suburb that is a part of the Miami metropolitan area. Parkland is the second wealthiest city in Florida. Residents earn an average of $128,292. The median house price is $475,000. The 14 square mile city has a population of 24,000. Parkland was developed to resemble parks. There are zoning laws in place to protect this. The city didn’t even have traffic lights until the mid 1990’s.

Pinecrest is the wealthiest city in Florida. Residents average an income of $30,900. Homes cost an average of $1 million. The population is 18,000. This affluent suburb of Miami includes several recently developed parks. The best is Pinecrest Gardens which is considered South Florida’s Cultural Arts Park. There are over 1,000 different types of trees and plants that were planted in the park. The scenic park has several streams, sinkholes and natural caves. Another interesting place to visit in Pinecrest is the Miami Serpentareum which has several types of reptiles and amphibians.