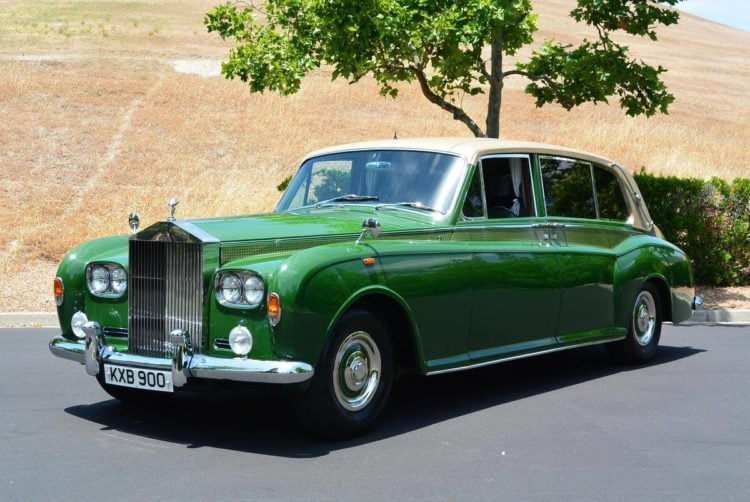 The Rolls Royce Phantom VI was the perfect reflection of Great Britain’s craftsmanship, and it acquired the name, Great Britain on wheels. This machine was the ideal show of prestige, and no average citizen could even think of owning one. It was a chauffeur-driven limousine that could only be identified with dignitaries and the cream of the society. Production of these machines kicked off back in 1968 but came to an end 23 years later in 1991. The Rolls Royce Phantom VI was an upgrade on the preceding phantom v built with a view to an increasing room and offering more efficiency. Most of these machines were customized; hence, it is hard to come by more than two similar automobiles. The vehicle reflected whatever their owner’s preferences and aspirations entailed. Consequently, the existing machines are a description of their first owners. Over the 23 years of production, only 374 pieces of this brand were made. The Rolls Royce Phantom VI wielded lots of qualities and features that granted it the king-size stature. Some of the attributes are detailed below:

Engine and the Mechanical Systems

According to Classic Cars Wiki, this machine has impressive capabilities and features within its system. A highlight of why upon its production it was considered the best luxury pair of wheels. The Rolls Royce Phantom VI flaunted coil springs in front, leaf springs at the back and very efficient drum brakes system serving its four wheels.

The machine also boasted of a powerful twin SU carburetors 6,230cc (380cu in) 90 degree V8 with a bore of 104mm (4.1 in) and stroke of 91.5 mm (3.60 in), paired to a 4-speed automatic gearbox. However, some improvements were made on the machine in 1979. The engine power capacity was increased to 6,750 ccs (412 cu in) by the adoption of the Rolls Royce Silver Spirit engine, a 3-speed automatic gear system incorporated with a torque converter added. Furthermore, there were additional separate front and back air conditioning units.

The Rolls Royce Phantom VI has a classy, sleek and elegant appearance the reason why it topped other luxury cars back in the day. The machine sits on a rolling body build that probably increased its weight in comparison to its predecessor, the Phantom V. However, the larger body allowed for perfect and ease of customization to suit a customer’s specifications and taste. It also flaunted a long 3660-millimeter wheelbase, a fit for its long body. The larger body allowed for extra room for upholstery and legs.

Moreover, a mini-bar became a must-have in addition to additional seats. The color schemes and the leather work for interior design always fell in line with a customer’s preferences. The vehicle’s interior is an epitome of comfort and outstanding understatement of details. The Landaulet styled last made machine was a convertible offering enough room for dignitaries to wave to cheering crowds in the streets. H. J. Mulliner & Co and Park Ward constructed the bodies of these machines.

The Rolls Royce Phantom VI was not meant to be a speedy type of vehicle owing to its status as a means of transport for dignitaries and respectable people in the society. The queen is majestic with no need for speed. However, even with its sizable rolling body that weighs almost 2.5 tonnes, the machine can still hit a top speed of 160km/h; a feature that could be attributed to its super and potent engine.

The Rolls Royce Phantom VI has stood the test of time. Despite their production ceasing back in 1991, there are still many of these vehicles that are currently hitting the road. The machine was coined out of superior materials, and its components are of exceptionally high standard hence the long life. With high maintenance and servicing, the vehicle can outlive modern machines.

The Rolls Royce Phantom VI is also not secure from specific mechanical faults identified with most Rolls Royce vehicle models. Such mechanical problems include fuel and oil leaks, fuel pumps break down and clogged up gasket due to sludge and foam accumulating in the oil filters.

The class that the Rolls Royce Phantom VI exudes demands for top-notch maintenance to keep the machine running properly. Maintenance also helps to cut the probable rooftop repair costs of this pair of wheels. According to Otto European website,  the following are the most recommended maintenance drills for any Rolls Royce vehicle:

The Rolls Royce Phantom VI still maintains its status as a top-notch prestigious vehicle. As such, its prices are still significantly high even in the current market. According to Hagerty,  the prices range between $100,000 and $187,000 with those in the best conditions being relatively more expensive.

Among the notable dignitaries who had the pleasure of owning this brand include: