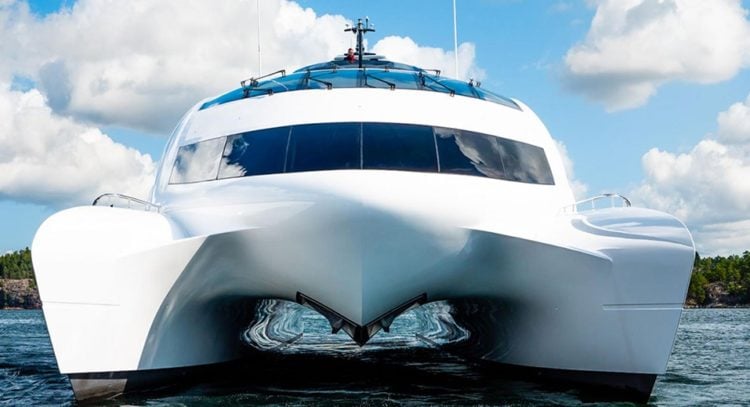 Have you heard of the catamaran called “Royal Falcon One”? If you haven’t, then you are in for quite a treat when you start reading about it. As a matter of fact, you will probably be inspired to find out as much about it as you possibly can, including finding pictures of this astonishing and impressive-looking vessel. For starters, it’s unlike anything else that’s ever graced the water. In terms of both performance and appearance, it really doesn’t have any equals to speak of. As a matter of fact, it was designed from scratch because there wasn’t anything else even remotely like it when it was built. That means that design teams and engineers alike had to figure out how to create the ideal yacht and marry it to the hull of a catamaran, creating something that even the most discerning individual would be happy to sail on.

This particular vessel is something that looks much more like it was designed to appear on an episode of “Star Trek” than a boat that belongs on the water. It’s as sleek as they come, looking far more like the aerodynamic, futuristic yacht that it truly is. Of course, it does have the catamaran hull, meaning that there is a lot of room that’s lost at the front of the boat. Nevertheless, designers were able to come in and create something that was truly unique. There’s no doubt about it, this boat looks very much like a high-end yacht in every respect except for the shape of the hull. On that end, it looks like one of the fastest racing boats that you’re ever likely to lay eyes on. In reality, it really is all of these things wrapped up into one very sleek package. As a matter of fact, the boat is capable of traveling at an astonishing 43 mph, a speed that’s much faster than a lot of smaller, lighter boats. If you know anything about boats, you know that this is more than respectable. It becomes even more so when you consider the fact that this particular boat is 135 feet long. While it’s true that there might be some boats that are slightly faster, there certainly aren’t many. In addition, this is a watercraft like nothing else that you could ever even imagine. It’s not all about speed and performance. While it’s certainly true that this is important, luxury matters as well.

Performance and Art Come Together

It is a truly beautiful thing when performance and art are capable of coming together, and that is precisely what has happened here. Not surprisingly, the company that built the boat, Royal Falcon Fleet, decided to turn to someone who knows a thing or two about performance (albeit on land). They decided to get together with the engineers at Porsche in order to design the boat to look as sleek and is fast as any Porsche automobile ever has been. The key was to create something that was fully capable of looking beautiful, even as it was in the midst of outperforming virtually everything else on the water. No one would ever argue the fact that they definitely accomplished this goal. In fact, they couldn’t have done a better job in the eyes of most individuals.

The thing that is truly surprising about this particular boat is that it’s a lot more spacious on the inside than you might think when looking at it from the outside. In fact, it has five separate cabins and is capable of comfortably sleeping up to 10 people with room to spare. In addition to room for guests, there is also room for a crew of 10 to man the boat. Surprisingly enough, their quarters are actually located within the twin hulls of the boat. As such, they’re completely out of sight until they are needed. As a matter of fact, it seems that the one thing this boat does not lack is space, despite the earlier assumption made about the catamaran hull causing an issue. In addition to sleeping quarters and a separate master suite that is located upstairs, the boat has a kitchen that would rival any 5-star hotel and an entertainment room to match. There, guests can rest and relax, read, watch television or do virtually anything else that they would like to do. There’s also a separate sun deck that can be found directly off the master suite. Of course, you’re going to get plenty of sun with this boat as well. It incorporates windows that run all the way around the boat itself.

There’s no doubt about it, this is a boat that’s capable of rivaling even the most exclusive hotels in the world. There are many elements of it that are inspired by these types of hotels, not the least of which include full accommodations and spacious quarters. In some aspects, the boat is not unlike the Porsche automobiles that the design team from that company are also responsible for. This one just happens to glide across the water as opposed to racing down the road. In still other respects, it is a luxurious yacht that simply cannot be rivaled. Perhaps that is what makes this particular vessel so unique. It doesn’t incorporate only one of the aforementioned qualities, but all of them mixed together. The beauty of it is that all of these qualities come together in order to create something that is genuinely out of this world. When you look at it, you’re not sure if it’s meant to float on the water or if it’s about to take to the skies and do a few laps. After all, what would you expect from a boat that can cut through the water at more than 40 miles per hour?