Home
Cars
The G. Patton Tomahawk 6×6 is a Jeep Wrangler on Steroids
Prev Article Next Article 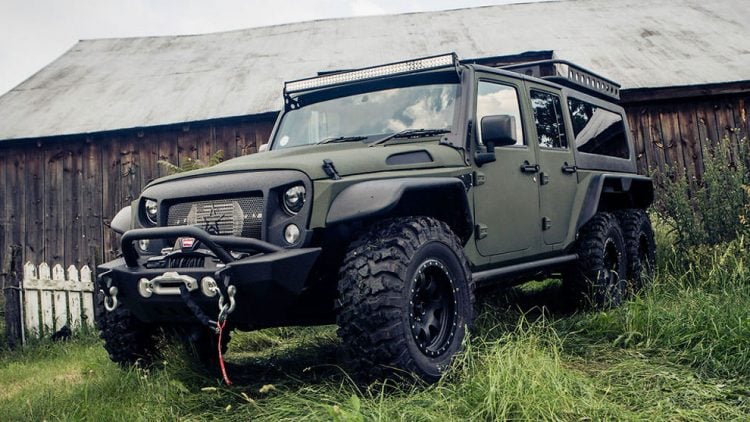 Imagine taking a Jeep Wrangler and injecting it with unlimited tubes of testosterone.  This is more than likely what the result would be.     This is the G. Patton Tomahawk, and as you can see, it looks like it took the same kind of stuff that the Incredible Hulk did.   With inspiration we can only guess was drawn from the Mercedes AMG G 63 6×6 this is a true vehicle for both the off road crowd but also those that like a little sophistication in their butt kicking vehicles.

G. Patton, a company based out of China, have taken a standard Jeep Wrangler and transformed it into this dark, six-wheeled beast that one can only imagine a John Rambo driving.  The designers literally cut a Wrangler in half, got rid of the rear portion, and replaced it with a pick-up bed.

Then, they added an extra axle, six humongous, 35-inch Mickey Thompson tires wrapped around 17-inch wheels, and an elongated hard top. The Jeep’s front fascia was redesigned into something more sinister, while the usual off-road embellishments, like a roof mounted LED bar light, a luggage rack, bull bars and a winch went on. Finally, thick coats of textured paint; military green contrasted with black, and aptly called the ‘Black Armour’, were applied. 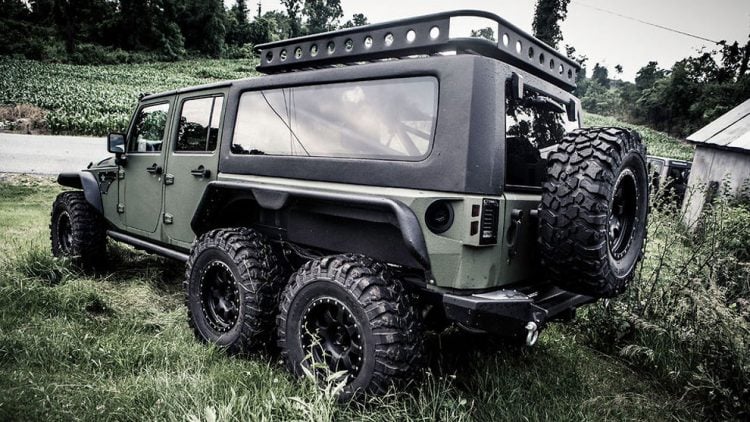 Due to the added weight, the Wrangler’s standard 5-cylinder diesel engine was rendered inappropriate, and thus went in a Jeep sourced, 3.6-liter Pentastar V6 engine, that too boosted with a supercharger. However, the output of the engine is unknown, but we reckon it’ll be enough to give the six wheeled Tomahawk the grunt it requires. 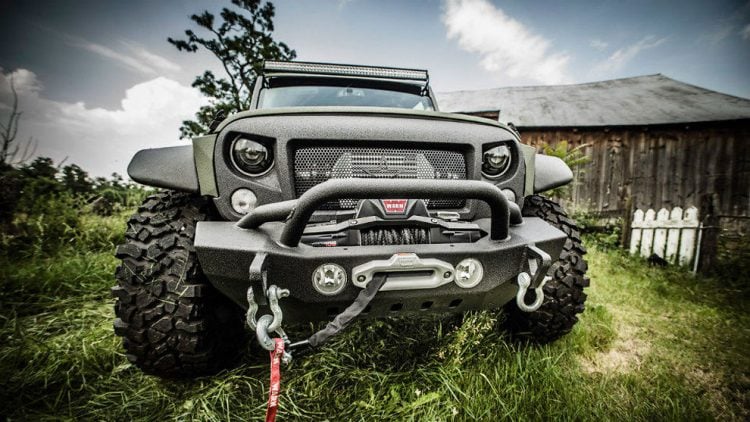 If you’re looking to go to war all by yourself and decided you want to raid an entire country, this very well might be the vehicle to do it in.  You’re not going to be seeing these on your local highway anytime soon but one can dream right?  So far we have no information about a stick price but if I’m a guessing man I would say 6 figures minimum (probably closer to $200K).  Does anyone remember when Hummers were all the rage?  This kind of makes me forget about them entirely.