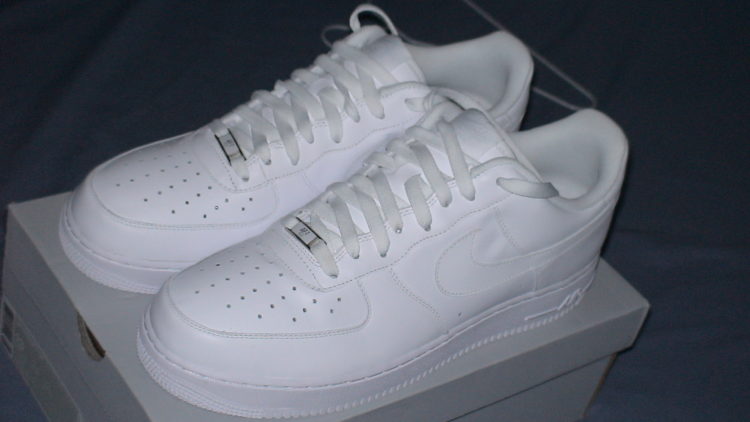 Nike is one of the most popular sneaker manufacturers in the world today. They’ve given the world a wild selection of choices in sneakers made for everyday wear as well as specialty shoes for use on the court, for running and for anything else that you can imagine. The company has honed in on the design and development of high quality sneakers in all of the lines that they produce. One of their top selling models has been the Nike Air Force 1. This iconic shoe was first released for sale to the public in 1982, when the brand was just getting into the production of basketball sneakers.

They developed a slogan that would carry the model a long way for promotional purposes, which was “Air in a Box.” It was one of the first sneakers to feature the now iconic air filled pocket, skillfully placed in the heel to provide professional and amateur basketball players with the support that was necessary along with cushioning for the sake of comfort. 1982 is the year that kicked off the long and prosperous run of the Nike Air Force 1.

Bruce Kilgore is the designer who created the first Air Force 1 model. He took into consideration the need for flexibility along with various support points that would augment a player’s ability on the court. This was fairly new territory for Nike, and it was imperative to get it right. Kilgore made use of the research done by Bill Bowerman’s X-rays of the feet of athletes in motion and had a firm understanding of what was necessary to provide the best known performance for a basketball player at that time and there were a few prototypes which were discarded because they didn’t fit the bill. It was perfection that he was after.

The first Air Force 1 had some of the characteristics of a hiking boot with the slanted shaft that resented a lower angle sloping towards the Achilles. There was method and careful analysis of every design aspect for the new shoe. He also developed a circular pattern for the out sole to provide players with flexibility when making pivoting motions in play delivered in a white and neutral gray colorway. Before the new Nike Air Force 1 was approved for release to the public, it underwent some stringent testing. The wear testers were basketball players and included Tinker Hatfield, a recent hire by Nike in 1981, as an architect. This was a fortunate move because Hatfield soon realized that he was best suited as a part of the design team for Nike and he changed departments to work with Kilgore . Within a year, the new model was approved for sale to the public. Six famous NBA players signed with Nike to wear the shoes in actual game play and with the likes of Jamal Wilkes, Mychal Thompson, Calvin Natt, Bobby Jones, Michael Cooper and Moses Malone sporting the shoe, the sales skyrocketed and the Air Force 1 became an instant success and an icon representing an element of pop culture in the 1980s, with the initial run of the shoe lasting only two years from 1982 through 1984.

The Air Force 1 ended in 1984 but it was such a popular shoe that it was requested that the brand bring it back. They complied with the re-release of a version with a slightly different Swoosh in an italicized form, but other than that, it remains the same with the exception of the removal of the side stitching. This would be the beginning of a new launch for the Nike Air Force in the upcoming year through the present as Nike would introduce the Air Force 2, 3, 4 and 5s.

The shoe was originally presented in a high top design but was made available in low top, mid top as well as the high tops. There was a serious need on the part of the brand to offer this top seller in a variety of styles to keep the public happy. In 1983, the low cut 1 was one of the most popular models and the white on white edition was one of the favorites, offered in a classic form that hit it big in the Hip Hop scene. This shoe model would make a powerful resurgence in 2005, selling an amazing 12 million pair. The Nike brand had a firm understanding that the Nike 1 was going to be around for a long time, simply because of high consumer demand. The design team started to experiment with new colors and a variety of materials for the sake of innovation and to create more choices. During the 1990s era there were several new editions of the Air Force 1 created. Some of the more novel variations include lizard and faux snake skin, canvas, reflective materials, suede, a variety of leathers and even some made of animal hair. A 25th Anniversary edition was offered in a crocodile skin material that retailed for a price of over $2 grand. Nike even solicited the input of their customers for the planned re-releases and let the fans vote on which models to include in the re-issue campaign held at the quarter century celebration. Included in the release was the Air Force XXV which was a retro nod to the original model that kicked off the AF1 love affair with the country with a commercial featuring Paul Pierce, Jermaine O’Neal, Tony Parker, Rasheed Wallace, Kobe Bryant, LeBron James, Stee Nash and others representing the new sneaker.

Popular models of the 2000s

In 2001, the AF1 Linen was released. It was a brown colorway with a pink swoosh that caught on well with fans but was only made available in Japan. The 3M material Snake was released the same year as a Japanese concept that everyone wanted to own and it would later be offered with real animal skin in some regions. The 2001 “Wheat AF1 was an experiment with a mid cut that took off better than expected with the aesthetic of a work boot in styling but the DNA of an AF1. In 2003, the AFI Hi Stash x was released and it was an introduction that was the predecessor to the current street wear with mesh panels and whimsical patterning. We saw re-issues in 2004 and 2006, back by popular vote, it became on of the most loved AF1 models in the history of the line.

The AFI Anaconda Masterpiece was released in 2007 as an iteration of the classic white on white as a special limited edition shoe with a Luxe edition offered for an inflated price tag. This shoe was big with rappers but the use of real animal skin started a negative movement on social media and Nike was forced to make the choice to avoid this type of controversy in the future. The 35th Anniversary of the Nike Air Force 1

In 2017, there was reason for celebration as the Air Force 1 had been in existence for 35 years. Nike collaborated with a group of all stars for the event including Travis Scott, Virgil Abloh, Don C, Kareem Biggs Burke, and Errolson Hugh to develop the AF 100 line. We learned that Don C chose premium leather materials and other high quality fabrics with inspirations from the AF2 and 3 in the creation of a new model called the AFi Hi called Just Don. The other collaborators contributed the AF1 Roc-a-Fella from Burke, the Lunar Force 1 Acronym by Hugh, the AFI Low Travis Scott by Scott, and the AF1 ’07 Off White by Abloh.

The iconic shoe has come full circle in its evolution and Nike pays due respect to the model with an occasional nod to the past with the re-issue of a retro edition, but the AF1 is a shoe that continues to evolve with the passage of time. With multiple colorways and a variety of different styling and materials available, the brand is moving forward with a host of new editions that cover the spectrum of personal taste and preferences.

The University Red is a new member of the family featuring a red colorway in tumbled leather with perforations that make it a highly breathable sneaker with branding on the heel and a bit of contrasting black color on the inner tongue. Available now for $100

This new shoe is going to be released in June of 2019. It will retail for $100 if you’re fast and buy your pair off of the racks at participating retailers.

The 2019 Fragment x Clot Nike Air Force 1 Premium is the result of a collaboration between designers Edison Chen and Hiroshi Fujiwara. The sneaker will be a low that will be offered in three choices including a University Red, a White combination and Black. The brand has not yet released any sneak peeks of the new AFI sneaker but we’re told that it will be available in October of 2019 for a price of $250.

The Indigo Force is a double layered sneaker in a canyon gold and spirit teal colorway. Both the heel and the eye stay of the shoe feature double layering in a new iteration of the Air Force 1 low. This shoe has already been released for 2019 for a manufacturer’s suggested retail selling price of just $100.

These are just a few examples of the many new Air Force 1 models being released for the 2019 sneaker season beginning in the spring and culminating towards the end of the year. The AF1 is an enduring model that shows no sign of losing popularity any time soon, or even in the future. The Nike Air Force 1 is perhaps the most iconic sneaker that the brand has created to date. From 1982 to the present, it is one of the best selling and most beloved models in the history of Nike. It started out with a limited number of choices during the early years when Nike wasn’t even sure if the shoe would sell. It’s come a long way since the era of the ’80s and has evolved into one of Nike’s most brilliant designs and it’s still in high demand among the masses. The Nike Air Force 1 has truly helped to shape the sneaker industry with its innovative design and broad appeal to the masses. The company nearly missed the opportunity of a lifetime when they made the decision to suspend production of the AFI in 1983, but because of the public outcry for a re-issue, Nike wisely took customer requests to heart. The Nike Air Force 1 has seen roughly 2000 different iterations with variances in materials, colorways, styling and other elements and it’s maintained the top position within the ranks of court sneakers. Thanks to Kilgore’s tenacity and commitment to doing it right the first time, the Air Force 1 is one of the most iconic sneakers in the United States and it stands as a symbol of pop culture as well as brilliance in quality and design.