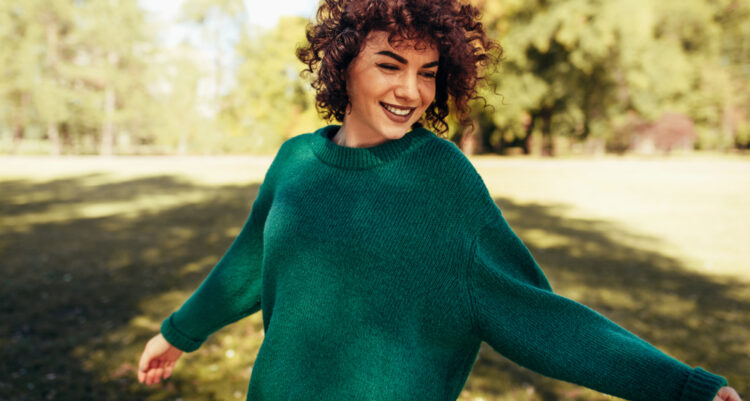 When the weather gets cool, the best way to throw off the chill is to wear a sweater. It’s a garment that provides instant warmth and protection from chilly weather when a coat is too heavy but it’s too cool to go out in shirtsleeves. Sweaters come in dozens of styles to accommodate fashion trends, personal preferences for comfort, and lifestyle. Here are twenty different types of sweaters to consider.

Lands End explains that the tunic style sweater deserves a category of its own, although this kind of sweater can be hard to define. Tunics come in various fabrics that don’t all qualify in the sweater category, so it’s essential to distinguish between them. The Tunic is a style that is similar to a shirt that has a unique shape. tunics are loosely cut and hand lower on the body, flaring at the hem. Most tunics are pullovers, made of warm knit or woven sweater material and hang lower than a traditional sweater. They’re often worn with stretch or yoga pants.

A V-Neck sweater is defined by the shape of its neckline. The cut of the neck makes a deep V-shape that is easy to distinguish from other sweater styles. V-necks are usually worn over a collared shirt with the collar displayed on the outside of the sweater’s opening. They are sometimes worn with a tie to make a fashion statement for professional occasions, but they’re also used for casual occasions. The V-neck is a versatile sweater that is an essential wardrobe inclusion for dressy and casual occasions. The V-Neck sweater also helps to add layering to an ensemble for cool weather.

Crewneck Sweaters are popular with athletes and those involved with physical activities because of their comfortable neckline. The style originated during the early 20th century to provide warmth for athletes while preventing skin irritation caused by bulkier styles. Crewneck sweaters are sporty types of casual-wear sweaters that offer wearers a casual look. Some crewnecks are also slightly dressy without taking the fashion statement over the top. They’re usually worn when you want to look nice, but avoid overdressing.

Pullover sweaters come in a vast range of styles and materials. The term pullover applies to any type of seater that does not hang open, zip, or button. It’s a solid sweater without an opening that you put on by pulling it over your head to rest on the shoulders. There is, however, a difference and distinctions between turtlenecks and tunic sweaters which have their categories. A crewneck or V-neck sweater are pullovers and both fit neatly into this category without crossing any lines of fashion definition.

The cardigan sweater is one of the oldest and most popular styles. it’s a classic sweater type that has a rich and storied history. The Cardigan sweater gets its name from the 7th Earl of Cardigan, James Brudness. He was a British general from the 18th century who had a thing about the way his hair appeared. He didn’t appreciate mussing his coiffe with pullover sweaters. His solution was to invent a sweater that didn’t require pulling over the head. He opened the front of the sweater and added buttons for the closures of the front. The result was the first cardigan-style sweater. It was born of a man’s vanity, but its advantages are appreciated by people of all genders. The cardigan style sweater evolved into multiple styles. you can find cardigans that are open sweaters without buttons. Some are short, some are long, but all cardigans are open sweaters. Some come with fasteners such as snaps or buttons and others feature a belt that allows for their closure.

The Creative Curator explains that the Aran Sweater gets its name from the Aran Islands near Ireland. It’s also called a fisherman’s sweater because the style became popular with fishermen in the area because of its thickness and texture. It’s a sweater that was made for outdoor use to help protect from the chilly ocean winds that frequently blow. Aran sweaters come in a variety of colors and styles, but they all share a few commonalities. They’re hand-knitted of heavy materials that can be wool yarn, usually obtained from sheep’s wool. They can also be made of other types of fibers. Some variations include a thinner texture when made with machine knitters. The most expensive and lovely versions are hand-knitted. The Aran sweaters are warm enough to ward off the cold of early mornings on the ocean and they can take the place of a jacket. It’s difficult to wear a jacket over the top of this type of sweater because of the bulk.

Cashmere sweaters are classified in the luxury garment category. They are made of cashmere wool, which is known to fetch a pretty penny. Cashmere is valued for its luxurious feel against the skin. Cashmere is a type of wool that has a natural softness and the degree of itchiness it produces is far less than sheep’s wool. Artisans gently brush the cashmere wool before knitting it into sweaters to give the finished garment a silky and smooth texture. The most expensive cashmere sweaters are hand-knit. it’s one of the most popular types of sweaters. Cashmere sweaters come in a range of styles from casual to dressy. The term Cashmere refers to the material type rather than the style. When purchasing a cashmere sweater it’s wise to confirm the reputation of the seller as this costly material is often counterfeited.

The chunky sweater gets its name from the massive bulkiness it offers. A chunky sweater is any kind of sweater that is heavier and thicker than a classic or standard sweater. The chunky texture is achieved by using bigger needles to knit the fibers into a garment. These sweaters are also bulked by using chunky yarn that is thicker than other types of yarn. Expert knitters often use a simple garter stitch to achieve the chunky style, but some other textured stitches may be employed. Chunky sweaters are not flattering for your figure, but they can also hide a few imperfections and they’re the coziest sweater types in cold weather. Chunky sweaters come in all lengths from short to long that extend beneath the knees, but beware…the longer versions are heavy on the shoulders.

Funnel Neck sweaters are distinguished by their big and oversized appearance. They’re similar to a turtleneck sweater, but don’t quite fit into that category. The funnel neck has a collar that features chunky ribbing to create a big neck. That’s where the term funnels originate. They’re ideal for cool autumn evenings because they’re as warm as most jackets. They offer an attractive aesthetic when worn with casual streetwear styles such as jeans and boots or sneakers. You can pull them over a tee shirt when the weather gets chilly.

A hoody sweater is a kind of sweater that resembles a traditional hoody, only in sweater form. This type of sweater features a hood, and most of these sweaters zip up the front, but you can also find them in pullover styles. They may be made of basic cotton yarn, Cashmere wool, or angora wool. Some versions come with drawstrings and handy front pockets. There are many types of hoodie sweaters. When you see one with a hood, you can bet that it’s a hoody.

Full-Zip is a term that describes any cardigan style sweater that has a full-frontal opening that is closed with a zipper. This type of sweater comes in a variety of styles. It features a full-frontal zipper without exception. Those with partial button closures do not qualify under the category.

The cowl neck sweater is a style that features a hanging neck. They are often confused with turtle necklines, but they are distinctly different. Cowl necks are larger and have a draping effect beneath the neck. The size of the cowls varies from slight to large, but they always feature a drape.

Argyle Knit sweaters are distinguished by their diamond-shaped designs. It’s one of the styles recognized from its pattern of interlocking diamond shapes. This type of sweater gets worn on golf courses. It’s a style that is associated with preppy fashions. Argyle sweaters originated in Scotland with the Campbell clan from the Argyle region of the western part of the country. It’s a take on the tartan worn by the clan. It dates back as far as the 1600s. The Argyle pattern was developed and marketed by the Pringle of Scotland fashion house. The company further developed a branded argyle pattern made famous by the Duke of Windsor, who preferred the Argyle pattern in sweaters he wore when playing golf.

The tennis sweater is a V-neck pullover style featuring long sleeves. You can distinguish the tennis sweaters by the narrow bands of color knit into the wrists and the neck. They’re white except for the bands.

Thread Curve explains that the bell sleeve sweater is an old-style that features flared sleeves. The style was inspired by fashions observed in Japan in the late 700s. Bell sleeves were a fashion statement in the Orient over a thousand years ago. The style became popular in Europe during the Medieval age. It’s been a fashion trend off and on throughout recorded history.

The Boyfriend sweater is a V-neck style that uses a lot of material to make it roomy and loose-fitting. It’s a sweater designed for women, yet it is a style that looks like a man’s sweater. That’s why they call them boyfriend sweaters. This style features a ribbed bottom that extends below the waist. It’s a type of oversized sweater known for its comfort.

The cape sweater is a type of sweater shaped like a poncho. Cape sweaters are highly fashionable accessories that help defray the cold, but you must wear them over a shirt because they are open and flowing.

Fair Isle sweaters are a favorite among England’s Royal Family. The Fair Isle sweater originated with Edward VIII when he was the Duke of Windsor. He preferred to wear this type of sweater. It caught on with the public. These sweaters are made of soft wool and designed with pretty colors. They became a fashion trend among those who liked to emulate members of the Royal Family. Fair Isle sweaters are hand-knit, and a long waiting list extends back for years. Some designers have attempted to mass-produce similar styles that resemble handmade sweaters, but there is a notable distinction. The style comes in pullover, cardigan, and button-up styles. The patterns used for these sweaters date back centuries.