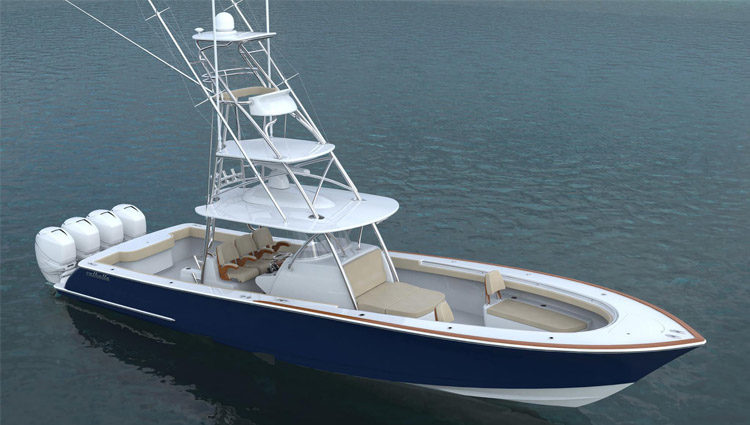 Viking Yachts CEO Pat Healey shocked the boating world at the recent Miami Yacht Show by announcing a brand-new line of center-consoles called Valhalla Boatworks. Viking is known as a legendary American  boat builder and is the unrivaled leader when it comes to the construction of tournament-winning sportfishing yachts. In recent years, the Viking team has developed several smaller models in their feet including the popular Billfish Series and the new 44 Convertible. Aimed at enticing large center-console owners to make the leap into a larger sportfishing yachts, the Billfish series has sold dozens of hulls and will introduce a new 46 model this Summer.

The first three Valhalla Boatworks models will include the V-41, V-37, and a V-33. “Valhalla Boatworks was developed to allow our dealers and customers to fulfill a strong desire for high-end center consoles built by the Viking Yacht Company,” says Viking President and CEO Patrick Healey at the press announcement. “It’s a very exciting time and another important chapter in our history of building a better boat every day.”

In an already crowded center-console market, it will be Viking’s reputation and commitment to cutting edge-design that will differentiate them from the competition. Center-Consoles by nature are versatile boats that can be used in a variety of ways and the new Valhalla models are no different. Each model is equipped with a “boat-load” of fishing features for the hardcore angler. Innovative and intelligently designed desk spaces open up the opportunities for multiple in-deck fish boxes, a raised transom live-well, a port dive door for easy entry/exit for divers, strategically placed rod holders, and lots of storage for bait and tackle. Don’t overlook the Valhalla series as a nice day boat either, perfect for snorkeling or anchoring at a sandbar. As you would expect from the Viking factory, the Valhalla models began with the most technologically advanced hull design, materials, and construction. The designers at the New Gretna based factory employed Michael Peters Yacht Design and their patented Stepped-V Ventilated Tunnel running surface to improve the hull. The MPYD stepped hull design improves performance, stability, and handling. “It’s the most advanced and proven stepped-hull design in the world,” says Viking Design Manager David Wilson. “The twin steps and tunnel not only give you fast and efficient performance but also precise handling and a very stable ride.”

Viking’s sportfishing yachts are also known for their comfortable and conveniently-placed seats. After all, trolling a weedline for 3 hours can be exhausting without a place to sit down. The cockpits on Viking’s sportfish are always designed with an observation mezzanine so that anyone watching the action unfold can do so in comfort. Although somewhat smaller than their larger siblings, the  Valhalla models will also come with an aft mezzanine that is positioned directly behind the helm seats. Lounge seats perfect for sunbathing are also placed on the bow and become a great place to sit and enjoy the scenery while cruising. Viking has always had a preference for speed and the Valhalla center-consoles will be no different. The V-41, V-37, and V-33 will be powered by four-stroke outboard engines and the owner will have their preference of brand. Depending on the model, the horsepower ratings will range from 300HP to 425HP in either twin, triple, or quad configurations. These engines configurations complimented by the patented stepped-hull design will deliver a best in class performance and fuel efficiency.

All of the components, electronics, and optional tower will all be handled in-house by the Viking team, resulting in exceptional quality control. Viking has several subsidiary companies including Atlantic Marine Electronics, which will provide all of the different electronics packages offered to the owner. Palm Beach Towers will also be responsible for providing and installing the optional hardtops, Marlin Towers, and Gap towers. There is even a dedicated compartment for a Seakeeper Gyro that doesn’t sacrifice any deck space. Having all of these components installed at the factory means that your new Valhalla center-console will be delivered turnkey and ready to fish. Viking has hinted that we could start to see the new Valhalla models this fall, but no official date has yet to be released. While pricing of each model is also still being kept secret, don’t expect this to be a value-level boat. Viking is a premium brand with all of their sportfishing and motor yacht models costing in the millions. The Valhalla Boatworks models won’t be as much as the new 58 Convertible, but owners can expect a higher price for exceptional quality and performance.