Home
Motorcycles
What Was the Steve McQueen Motorcycle Used in “The Great Escape?”
Prev Article Next Article 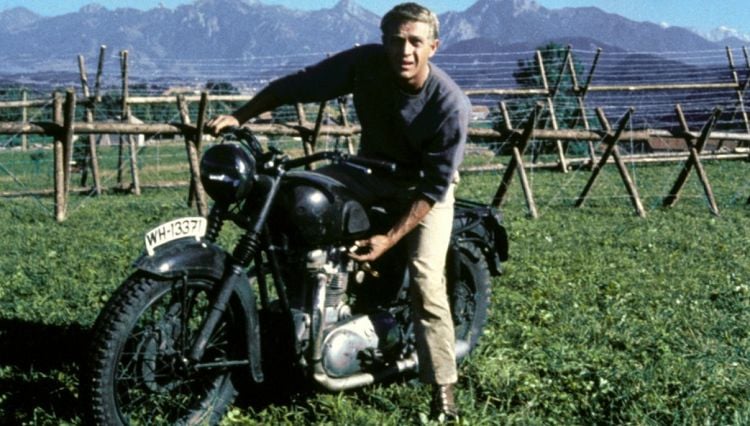 In 1787, Thomas Jefferson said he preferred dangerous freedom to slavery, and it is perhaps for this reason that people have continuously fought to be free regardless of the dangers involved. During World War II, many prisoners of war were in various camps like Stalag Luft III in Poland. Since it imprisoned the most notorious escapees from American and British armed forces, it was only a matter of time before they tried escaping again. Anyone who has ever watched “The Great Escape” is captivated by the jump that Captain Virgil Hilts, played by Steve McQueen, made during the escape. If you are still wondering what the Steve McQueen motorcycle used in “The Great Escape” was, here is all you need to know about it.

It Was Not a German BMW

According to BusinessLive, McQueen refused to ride a German BMW. He loved British bikes so much so riding a German would be a betrayal. For this reason, he opted to go with the 1961 Triumph TR6 Trophy that artist Von Dutch disguised to resemble German WWII BMW R75s. However, it was not the only one built; Fast Bikes Mag revealed that there were three motorcycles built to resemble the German BMWs. Two of them were built in the USA by Bud Ekins, while the other, the jump bike, was the handiwork of Ken Heanes stationed in the UK.

The jump bike was used to make the film during a stunt when McQueen, or rather USAFF Captain Hilts, was being chased by the German soldiers. He came across a series of barbed wire fences, and although he managed to jump the first, making the second jump was unsuccessful; the bike was shot down and damaged. However, unknown to the film’s lovers, McQueen did not do that famous stunt; it was done by his friend and American stuntman Ekins. McQueen was not allowed to perform the stunt to prevent the risk of injuring himself, which did not sit well with the studio insurers. Still, his love for riding pushed him to disregard the risk and took the bike for a fun ride the day before filming, as they rehearsed with Ekins.

Since most people thought McQueen did the jump, he felt guilty about it and never tried to hide the truth that it was Ekin, his double on the bike. Although he believed that he could not make the jump, his fellow actors had faith in him. All the riders did the stunt, including McQueen, who proved to himself that he could do it too. All who did the jump were filmed performing it; therefore, it could have been any of the three men: McQueen, Ekins, or Tim Gibbes, who made it to the final cut despite most believing it was Ekins.

The Motorcycle Was Used to Herd Animals

You would think that a motorcycle that helped make such a great stunt could be reserved and treated with special care. Unfortunately, after filming, it was returned to Heanes’ workshop to be used as a workshop hack. Later, it was sold to a farmer whose land was used during filming. He used it to herd his cattle, but the bike passed on to the deceased’s cowman when he passed away. They were not interested in the bike’s history because the cowman used it for a short while before storing it in a barn where it gathered dust.

For 15 years, the bike remained in the barn, but according to War History Online, Dick Shephard rescued it and decided to restore it to its former glory. Shephard disclosed that it was in bad shape because the front mudguard had rotten completely, making it a challenge to repair. Still, he was not interested in making it brand new. Instead, Shephard wanted to preserve the rear tires, the original exhausts, and the dents that the bike endured filming for a touch of authenticity. He proudly said that he restored the TR6 to the precise specifications of the 1962 motorcycle.

McQueen Faced Was with Ultimatum

McQueen loved racing, but the studio attorney presented him with an ultimatum; he had to choose between racing and acting. Being in the race tracks meant taking many risks, yet he was a family man with two young children to consider. Therefore, after being given 24 hours to make a decision, McQueen chose to be an actor. However, he was smart enough to ensure that he still got to race. According to Hagerty, although he signed that paper saying he wanted to be an actor, he outfoxed his contract by being in films such as “The Great Escape.” The film became the first of his many racing acts. However, his love for speed did not stop on the set alone; he drove like a maniac in real life, as disclosed by fellow actor David McCallum. McQueen drove as if he was still on the film’s set, mirroring the stunts, and even the traffic police were always in awe of him. The actor got used to being stopped by traffic police, who even joked that he kept winning the special prize for speeding before whisking him off to jail.

The Famous Jump Was included to Keep McQueen Happy

While the jump scene remains legendary and seems to be what most of the film’s lovers focus on, it was only added to keep the bike-obsessed McQueen happy. It has become the main focus of the film, and in 2019, Guy Martin, a TV presenter who was once a mechanic and racer wanted to make his mark by making the jump. He wanted to go a step further than McQueen, who did the first and second jump separately. Martin wanted to jump both fences in one go; therefore, he sought the help of engineers at the Hinckley factory to modify one of the Scramble models by making it light enough to accomplish the feat. Since its restoration, the bike that McQueen rode remains a prized possession at the Leicestershire Triumph Plant. It sits there on display, with other bikes used in films such as “Jurassic World” and “Mission Impossible II.” By 2019, it was valued at £1.5 million, which is bound to have increased since.