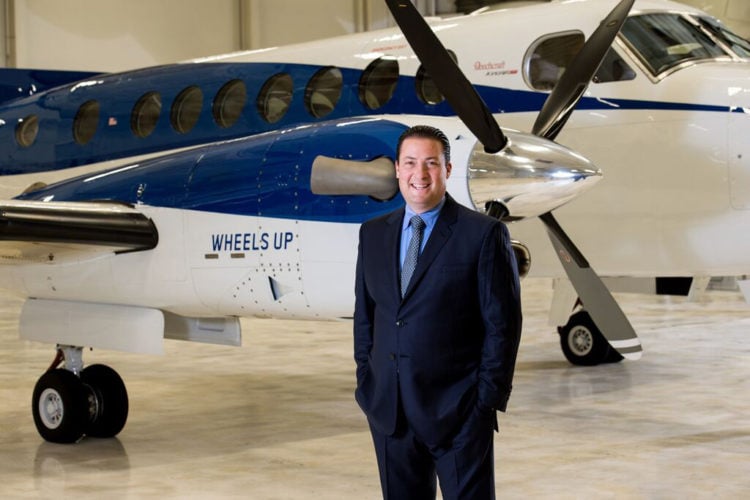 Wheels Up is the leading brand in private aviation. It was founded by serial entrepreneur Kenny Dichter in 2013 and since then the company has grown through its membership programs, innovative features, and cutting-edge technology. Wheels Up has achieved an enterprise valuation of over $2 billion, has approximately 11,000 active users and access to over 1,500 owned, managed, and third-party partner aircraft. The brand’s ambassadors include Tom Brady, Serena Williams, and Russell Wilson, among others. Here are 10 things you probably didn’t know about its founder, Kenny Dichter:

Dichter is visible on social media with profiles on both Twitter and LinkedIn.

Dichter grew up on Long Island and got his first job while in sixth grade where he delivered newspapers in the afternoon on weekdays and Sundays. An entrepreneur at heart, he started a retail business called Bucky’s during his freshman year at the University of Wisconsin. By the time he graduated in 1990, Bucky’s had expanded to three locations throughout the state. His love for private aviation and the potential for Wheels Up was born in 1998. By then he was 30 and had a business meeting to attend in South Carolina. A friend lent him his jet to travel from Teterboro Airport in New Jersey to Kiawah Island in South Carolina. He recalls turning to his business partner and telling him, “We gotta make a business out of this.” It was “love at first flight,” Dichter told CNBC.

3. Is a serial entrepreneur

The encounter on a private jet led to Marquis Jet, Dichter’s first aviation business, and the creation of the first-ever fractional jet card program. Marquis Jet was powered by Net Jets which is owned  by Warren Buffett’s Berkshire Hathaway. However, this is just one out of a series of businesses Dichter has been involved in which include Juice Press, an organic raw juice and raw food company, and Tequila Avion, among others. Other businesses include:

4. Winner of the 17th Annual Living Legends of Aviation Award

At the Annual Living Legends of Aviation Award in Los Angeles in 2020, Dichter was recognized for democratizing and disrupting the private aviation space twice and he was presented with the prestigious Eren Ozman Entrepreneur of the Year Award. The recognition looks at turnkey additions to the industry, such as innovation and the use of technology.

5. Integrated the use of technology in the aviation industry

Groundbreaking innovation is one of Dichter’s major strengths. As part of his strategic plans for Wheels Up, he envisions booking a private jet to be as easy as booking an Airbnb or an Uber ride. Wheels Up leads the digitization of the aviation sector with its innovative business model and Avianis flight management system technology to make flying private more accessible to a much wider market.

6. Is a sociology major

Dichter, a Sociology major, graduated from the University of Wisconsin and continues on his path of building and selling businesses. He has a good eye for creating, developing, and growing business that have been acquired by other companies. Dichter is an expert at marketing, merchandising, public relations, and branding. He brings the necessary skills to his businesses, along with an incredible work ethic and focus, which have proven to be, for him, effective across industries.

7. Sits on boards to make change

In 2020, Dichter spearheaded Meals Up with Wheels Up partners and Ambassadors in an effort under the Wheels Up Cares platform that ultimately raised and inspired the equivalent of more than 50 million meals, and counting, for hunger relief organization Feeding America. Dichter is also a major supporter of his alma mater, the University of Wisconsin-Madison.  In 2019, he partnered with the Office of Admissions and Recruitment in Madison to launch the Fly High Fund, which will support digital outreach to students with diverse backgrounds to encourage them to apply. Dichter and Tim Armstrong co-founded Action America, an organization to help bring Americans together after the 9/11 tragedy. Dichter chaired the Council of Advocates at New York’s Mount Sinai Hospital and sat on the Council board with the CEO and Chairman of Mount Sinai Hospital, Dr. Ken Davis. Dichter continues to be active with the hospital in several areas.

8. Has a track record of negotiating mega-deals and strategic acquisitions

9. Is Founder and CEO of a company with access to over 1,500 owned, managed, and third-party partner aircraft.

Comprised of Wheels Up owned, leased, managed and partner aircraft, the Wheels Up marketplace provides access to over 1,500 private planes. This expansive fleet includes the King Air 350i and Light, Midsize, Super-Mid, and Large-Cabin Jets, that you can access through the Wheels Up App or by joining one of their Membership options.

One of his most recent partnerships is between Wheels Up and Delta Air Lines. The agreement combines Delta Private Jets with Wheels Up, establishing one of the world’s largest owned and managed fleets of private aircraft. The partnership between Wheels Up and Delta will provide consumers with unique access to Wheels Up’s private aviation platform alongside Delta’s global network, creating unparalleled travel experiences in private and commercial aviation. The partnership will make private aviation accessible to more individuals and businesses in the U.S. and around the world.

In 2019, Wheels Up acquired Travel Management Company, then the largest wholesale-focused light jet operator in the United States. Wheels Up also acquired Gama Aviation LLC (doing business as Gama Aviation Signature), a leading private aviation services company that provides aircraft management, private jet charter, and ancillary support for its managed aircraft in 2020. And in January 2021, Wheels Up acquired Mountain Aviation, the largest and growing Part 135-operated Citation X fleet in the United States, with bases in Denver, Teterboro, and Southern California. With these strategic acquisitions, Wheels Up is now one of the largest aircraft management companies in the world.