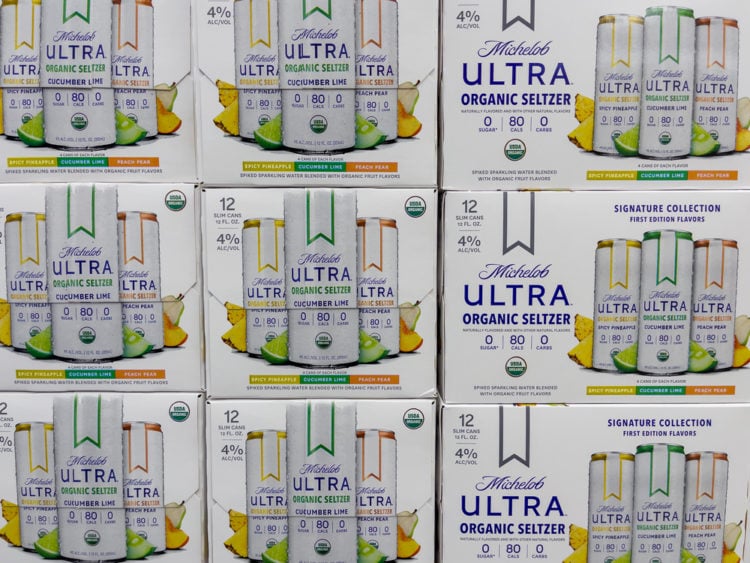 Hard seltzer was all the rage in 2020 and 2021, and people bought it by the bottles, cans, and cases. Some hard seltzers are a rousing success, sparkling and effervescent, with a light, delicious flavor. Unfortunately, not every hard seltzer was a winner. In fact, some flavors are downright disappointing or, worse, disgusting. Here are the ten worst hard seltzers money can buy.

Have you ever thought peanut butter would be so much better if it got you drunk? Neither did anyone else until this atrocity was born. Scott D. on Untapped says, “Awful. Who thought this was a good idea?” The following review only has a vomit emoji, but neither gave a full star. The best thing we can say about this is that a few people didn’t hate it, and the label is pretty cool.

Aqva’s Peach Mint Hard Seltzer wasn’t a terrible idea. Fruit and mint can go well together if properly executed, but regrettably, this wasn’t. This watery disappointment could have been a winner but lacked the subtlety and well-blended flavors that would have given it a chance at greatness.

This raspberry and Meyer lemon hard seltzer had everything it needed to be utterly delectable. Seek Out uses real raspberries and not the common substitute flavoring castoreum that comes from a gland near a beaver’s anus. That’s an excellent start for any raspberry food or drink. Plus, anything flavored with Meyer lemons should have real zest. Sadly, this hard seltzer came up short of our expectations.

White Claw is often the source of good-natured jokes, but it is also the undisputed king of hard seltzer. While this style of drink isn’t for everyone, those who like hard seltzer can usually agree that a White Claw makes for a decent drink. There is a saying about not fixing things when they’re not broken, and White Claw’s Pure is proof of why. A flavorless hard seltzer could have made a good drink mix, but too many people tried to drink it, and it did not go down smoothly. According to the White Claw website product listings, they aren’t selling this anti-flavor anymore.

Michelob ULTRA Organic Seltzer has no GMO’s, no sugar, no carbs, and no chance at landing on our ‘best-of’ list anytime soon. This drink is another example of an idea that was in the right place, but the reality fell short of expectation for many. However, this is also one of two hard seltzers on our list that we have to mention is also well-loved. There seems to be no middle ground on the subject. People either love this drink, or they wouldn’t touch it with someone else’s tongue on a ten-foot pole.

Bon & Viv had the first Hard Seltzer Superbowl commercial ever. Nevertheless, grapefruit is a polarizing flavor to begin with. Anything grapefruit is going to have a strong contingent of supporters who enjoy the sharp, better tang, and an equally vociferous group of people who think it’s utterly disgusting. Bon & Viv’s Grapefruit Hard Seltzer has no sugar. Unless bitter is your preference, this is not the one for you.

When people joke that you can get pumpkin spice flavored anything, they are closer to the truth than they think. You can buy pumpkin spice ramen and wash it down with Budlight’s pumpkin spice hard seltzer. Does that sound awful? It should. More importantly, it is terrible. Unless you are so deeply committed to your love of pumpkin spice that you collect its items obsessively as only a true fan could, then skip this drink. It’s not coffee, and you’ll probably regret it.

Smirnoff makes good vodka. Naturally, most people expected great things from a Smirnoff Spiked Sparkling Seltzer. While the company makes some passable flavors, none of them are as good as its delightful flavored vodkas. At the bottom of the Smirnoff hard seltzer list is the Raspberry Rosé. Sadly the lovely name is the best thing about this nearly flavorless drink.

Crook & Marker’s Spiked & Sparkling Seltzer is the second entry on our list that has both a large number of fans and a surprisingly large group of people that despise the brand and flavor. Because this is often mentioned as ‘the worst,’ we have to give it a place of honor in the top three. However, we couldn’t bring ourselves to name this the champion because there are plenty of folks out there who happily drink Crook & Marker.

PBR is good stuff, and it comes from a good company. However, when we say that, it only applies to the beer. Pabst Blue Ribbon Stronger Seltzer is a hard pass. We wanted to love this because Pabst beer is light and refreshing, cost-effective, and union-made. Regretfully, we have to hand this seltzer the title of worst. In fact, if there’s one thing about PBR that isn’t great, it’s the hard seltzer. Please don’t do it. Get a beer from PBR instead.

Are you considering taste testing some new sparkling seltzers this holiday season? If you see any of these top ten worst choices on the shelf, maybe just don’t. When you give the gift of peanut butter, flavorless, or pumpkin spice hard seltzer, the recipient will know exactly how you feel about them, but there are better ways to end a friendship. Make bad party decisions that won’t make your guests want to scrape their tastebuds off. There are plenty of ways to have regrets as the year comes to a close, but if you aim to disappoint yourself, pick an unattainable New Year’s resolution instead. Your tongue will thank you.