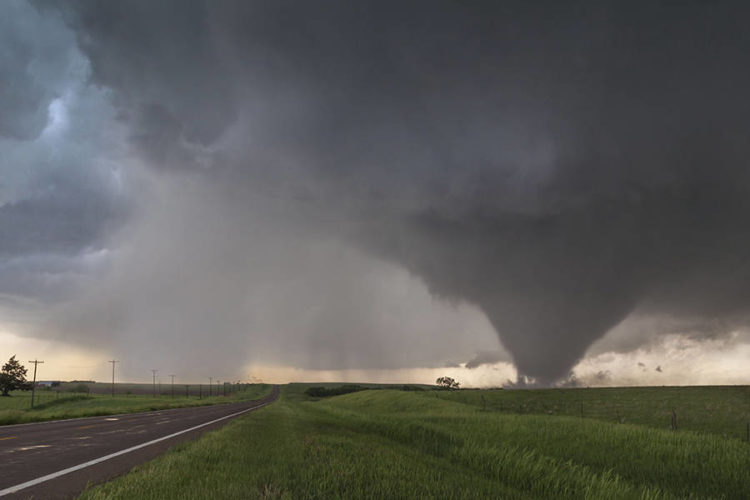 When a natural disaster strikes, it can have devastating consequences and cause massive destruction to property. They can also lead to people suffering from severe injury and the worst incidents even cause fatalities. One type of event that can cause these issues is tornadoes. These are violent storms that start as a thunderstorm before forming rotating columns of air with wind speeds of up to 300 miles per hour. While some tornadoes pass over the ocean or across open stretches of land causing little destruction, others hit highly populated areas and have devastating consequences. Here are the 20 worst tornadoes in world history by death toll.

According to Home Advisor, the 20th worst tornado in world history in terms of the death toll is one that tore through Gainesville, Georgia, in the United States. This disaster took place on April 6, 1936. Not only did the class F4 tornado destroy most of the business district, but it also started many fires. One of the fires was at the Cooper Pants Manufacturing Company, and 60 of the employees perished in the fire. A total of 203 people died at the hands of this tornado, and a further 1,600 were injured. Approximately 2,00o people were left homeless, and the financial toll topped $12.5 million.

On March 19, 1961, the Dhaka and Faridpur districts of Bangladesh were devastated by a tornado that killed 210 people. This was an unusual tornado as it took place in early spring, which is not usually a time when Bangladesh is affected by this type of weather. Thousands were killed and left homeless following this disaster, although there are no official records that show the exact figures.

215 people were killed when Calcutta, India, was struck by a violent tornado on April 08. 1838. There are very few details about the exact events of the tornado and how many people were injured or left homeless. However, records suggest that the tornado was traveling along the ground at a speed of six miles an hour, which gave the tornado time to sweep away everything in its path leaving a trail of devastation.

In 17th position on the list of the world’s deadliest tornadoes is the Tupelo Tornado that tore through Mississippi on April 05, 1936. It measured F5 on the Fujita scale and ripped through the residential districts. Even mansions that were well-built were destroyed by the tornado. According to the records, the tornado completely leveled 48 blocks. There were homes in Gum Pond, which is now called Gum Tree Park, that were swept into the pond while the families were still huddled together inside. An interesting fact is that Elvis Presley and his mother Gladys were two of the survivors of this tornado.

On March 24, 1998, 250 people were killed when a tornado struck West Bengal and the border of Orissa, which is now called Odisha. This is an area that has suffered multiple tornados. The Pioneer says that the area has been hit by 98 cyclones between 1891 and 2018 and that the event of 1998 was the worst. There is a theory that some of the 250 deaths could have been prevented as the warning system was badly managed. Each department was relying on other departments to deliver the final tornado warning. This led to the warning being delivered three hours late. The nearest weather station was also unaware that a tornado was on its way as it did not have radar to detect the tornado.

255 people were killed in St. Louis and East St. Louis in Missouri on May 27, 1896. Spawned from a supercell, this was an F4 tornado on the Fujita scale. Although the official death toll is 255, it is estimated that the true figure is nearer 400 and this is down to poor record-keeping at the time the tornado occurred. It is believed the tornado caused $10 million worth of damage.

The high death count of this tornado is attributed to a combination of a tightly packed population and a poor early warning system, both of which are common problems in Bangladesh. This tornado occurred on April 14, 1969, which is the same date as a tornado hit East Pakistan, which is fourth on this list. Although they occurred on the same date in the same part of the world, they were spawned by separate storms.

Like many other tornadoes that occur in Bangladesh, the poor early warning system contributed to the high death toll of this tornado. It is likely that the true death toll is much higher than 300, as this figure does not take into account people who lived in shanties that were killed. This is because these people often do not have records of their existence, so it is impossible to account for their deaths.

The area north of Cooch Behar and its surroundings was hit by a massive tornado on April 19, 1963. It was reported that debris was sent flying as far as 30 miles. The official death count was 300, although some records show only 139 deaths and other reports suggest that many people’s deaths were not officially recorded.

The tornado that hit Natchez in Mississippi on May 06, 1840, is often referred to as The Great Natchez Tornado. It was one of the worst tornadoes to ever hit the United States with a death toll of 317. The tornado, which was retroactively classes as an F5 tornado, swept along the Mississippi River, ripping away the forests on both sides of the banks. Many people who died in this disaster were those living on flatboats that were sucked up by the tornado and then tossed aside. The official death toll is not accurate as many slaves living on plantations in the area were killed, and they were not included in the official records.

This tornado was rated as somewhere between an F4 and F5 on the Fujita scale. It was powerful enough to disintegrate reinforced concrete. The tornado was part of a serious outbreak just north of Moscow that included severe thunderstorms. In addition to the tornado, the area was pelted with hailstones that were recorded as weighing up to 2.2 pounds.

The tornado that hit the Yangtze River is an unusual case because it cased 442 fatalities even though it was only F1 on the Fujita scale. The main reason for the high death toll is that a cruise ship was sailing down the river at the time, and it got caught up in the tornado, killing many of those on board. This event took place on June 01, 2105, and it is still under investigation. The main reason for the investigation is that other ships on the river received a warning and took appropriate action, but the cruise ship did not.

On April 1, 1977, a tornado tore through Madaripur and Shibchur in Bangladesh. In the wake of the tornado, 500 people were killed. It also destroyed every home and building in these areas, although there are no official figures relating to the financial damage.

Another tornado that caused 500 death is the one that hit the Italian island of Sicily on December 8, 1851. Known as Tornado Sicily, this tornado was formed by two water spouts that were accompanied by a hurricane. The area most affected was the town of Castellamare. It is the second-worst tornado in European history.

Seven villages were completely erased by this tornado, which occurred on April 11, 1964. The worst affected area was a small village called Bhabanipur, which was completely obliterated with no survivors. Although the official number killed in the incident is 500, there is conflicting information and some records show that as many as 1,400 people were killed.

The tornado that hit Grand Harbor in Valetta, Malta, on September 23, 1551, is the worst recorded tornado in European history. Four galleys were capsized when a tornado was formed from a waterspout. The galleys were San Michele, San Claudio, San Filippo, and Sante Fe. The town of Valetta didn’t actually exist until 1566, which is much later than the tornado. Despite this, the tornado is referred to as the tornado of Valetta due to the area it hit.

The East Pakistan Tornado happened on April 14, 1969. This is the same day that a tornado hit Comilla in Bangladesh. Despite sharing the same date, they were unrelated and began from separate storms. Immediately after the tornado happened, the death toll was recorded as over 1,000. However, this was later amended to 660 according to the official records. A shanty-town called Demra was the most badly affected area as the wind speeds that hit this town was recorded as 90 miles per hour, which is more than powerful enough to cause a significant level of devastation to property.

Ranking in the third position is the tornado that caused devastation in Bangladesh on April 17, 1973. The areas that were hit included Manikganj, Singair, and Nawabganj. The worst affected location was a village called Baluchar, which was completely wiped out by the tornado. Nine other towns were also severely damaged. According to various witnesses, the tornado began as two smaller funnels that joined together to create one large tornado. One witness report claims that a boat holding three passengers was tossed more than 3,000 feet from the riverbanks. The severity of this tornado is measured on the number of fatalities alone as there are no records showing the financial damage.

Not only was the Tri-State tornado of 1925 the second most devastating tornado in the world, but it is also the worst tornado in the history of the United States, says CNN. In addition to the 695 people who were killed in this natural disaster, there were also 2,027 people injured. The tornado occurred on March 18, 1925, and it traveled over 300 miles across Indiana, Illinois, and Missouri. The winds reached 260 miles per hours, so it was ranked as an F5 tornado on the Fujita scale.

According to Thought Co., the Daulatpur-Saturnia Tornado that ripped through Bangladesh on April 26, 1989, is the most devastating tornado in history. Bangladesh is one of the countries that are most frequently hit by tornadoes, along with the United States, but nobody could have expected the level of devastation caused by this event. Measuring a mile wide, the storm traveled 50 miles across an area of Bangladesh’s Dhaka region. One reason that the death toll reached as high as 1,300 is that the tornado hit an area where people lived in slums that were poorly constructed. Along with the fatalities, 12,000 people were injured, and 80,000 people were left homeless.