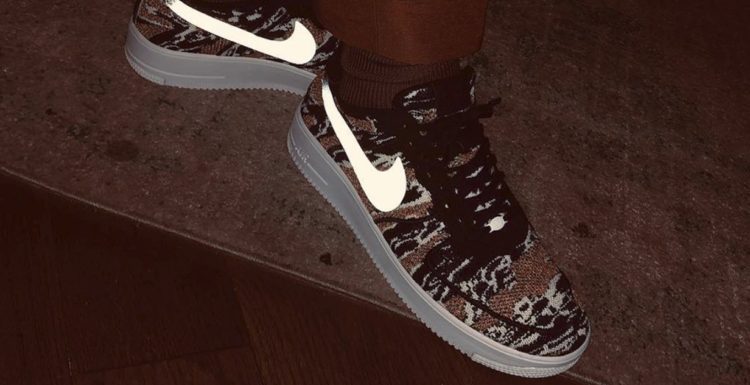 LeBron James is his collaborative effort with Nike revealed the pending delivery of their new sneaker called the Nike Air Force 1 Flyknit in a Caramel Chocolate Sundae edition. The shoe was strategically scheduled for release just ahead of the 2019 NBA All Star Game in the new colorway. You might say that this special edition of the Air Force 1 Flyknit is destined to become an extra special sweet treat because that is precisely the image that it conjures. LeBron himself is responsible for naming the new colorway which features a tiger camouflage style pattern.

Getting up close to the Caramel Chocolate Sundae

This is one of the more unique designs that we’ve seen coming from the famed brand that is highly and quite properly endorsed by James. A close look at the shoe reveals a combination of black and white tones applied in abstract shape which make up its base. We can tell that the caramel he chose in the name of the color is derived from the textured brown accents that are seen throughout the material which gives it an interesting and even aesthetically pleasing contrast.

The next feature of the new shoe is the application of the large, bold and bright white Nike swoosh which graces the exterior side of the shoe. It’s a telltale sign that Nike is at it again and it’s calling attention to the fact that these are in fact Nikes and for those who are experienced with the brand and with their partnership with LeBron James, it’s almost an automatic response to assume that this is yet another collaboration with the celebrity athlete.

When can we expect the new Caramel Chocolate Sundae?

Although there hasn’t been an exact release date nailed down for the new addition to the Air Force 1 Low Flyknit collection, we’re told that it’s going to make a resurgence with the Caramel Chocolate Sundae colorway sometime in the late spring or early summer for 2019.

A word to the wise

This is one of those very special editions that is going to go fast. Although the rumors for the shoe have been confirmed and it’s now a fact that it’s going to happen, there hasn’t been a lot of definite information released as of yet. With just the small amount of information that we have we know for certain that the shoe will be in high demand and although no manufacturer’s suggested retail price has been hinted at, we’re assuming that it will follow the established tradition and be offered at a price close to $160 per pair. That is, if you can manage to be among the first to show up at retailers who offer them for sale upon their release. The current level of anticipation that the sneak peek is generating is certain to result in a run on them when it’s known when and where they’re going to be offered.

There will always be a few online sites where you’ll be able to find the new Air Force 1 Low Flyknit Caramel Chocolate Sundae shoes but be advised that the odds of finding a pair for retail prices is slim to none. As with most of the in-demand new models coming out, there are a few savvy entrepreneurs who buy up as many as they can at retail prices, then offer them on a variety of online sites for far above the original selling price. It’s a strategy that has been paying off for them. Many are offered through an auction type platform where buyers bid against one another but there are usually a few online vendors who offer the for what the online market value suggests is the going price.

Here you have it. The sneak preview of the new Nike Air Force 1 Low Flyknit in the Caramel Chocolate Sundae Colorway. It’s not hard to tell why there’s such a fuss about them. They’re certainly beauties and our recommendation is that you keep your eyes peeled and your ears to the ground to get yours as soon as your local retailer has them in stock or go with a pre-sale option offered through a trusted online vendor.