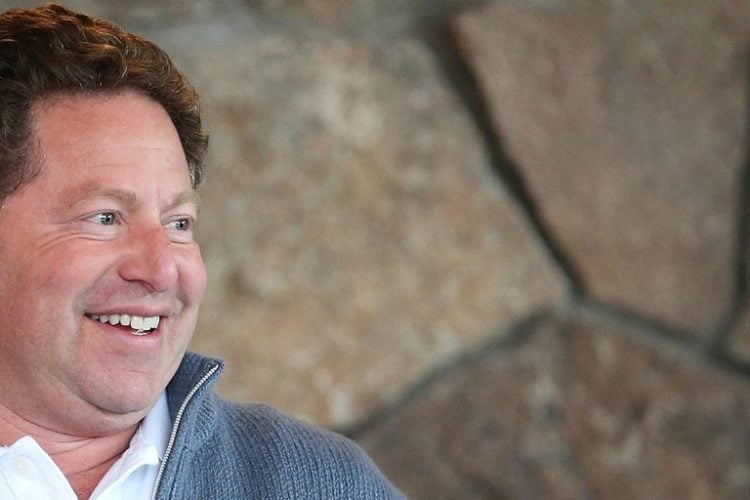 Video game and film holding company Activision Blizzard has been dominating their industry for years now. The company owns some of the most popular video games out right now including Call of Duty, Guitar Hero, Overwatch, World of Warcraft, and so many others. If you’re even remotely into video games, you’ve probably heard of the company name. What you probably haven’t heard about is Activision Blizzard’s CEO, Robert A. Kotick. Kotick has been essentially running the company since 1990. That’s an impressive number of years being on top, and it should make you want to know more about him. Here are 10 things about University of Michigan alum Robert A. Kotick to get you started.

Kotick was born on March 1, 1963 in Long Island, New York, which makes him 56 years old this year. That’s also where he spent much of his childhood before he moved away for college. Most of his friends call him “Bobby,” and that name followed him in his adulthood and professional life.

Kotick left New York to attend the University of Michigan for college. He was majoring in Art History at the time, which probably meant that he was unsure of what he wanted to do professionally. Under the advice of Steve Jobs, Kotick dropped out of college in order to run his own software company full-time. It was probably one of the best pieces of advice that Kotick’s ever received, and it was the beginning of his career in software tech.

Kotick’s career is a true testament to following your passion. He didn’t need a college degree to do what he needed to find success—just guts and drive. Kotick began creating software for the Apple II in 1983 after he dropped out of college. He received financial backing from Steve Wynn, who is known for his luxury casinos and hotels. It turns out that Kotick’s entrepreneurial interests in the software business were legitimate income possibilities.

Kotick’s first foray into the video game industry was in 1987 when he tried to acquire Commodore International. He turned the Amiga 500 into the first 16-bit video game system. However, that acquisition was unsuccessful. Kotick ended up acquiring a controlling stake in Leisure Concepts, which was Nintendo’s licensing agent. During this time, Kotick also founded the International Consumer Technologies, and he served as President there from 1986 until 1995. In 1990, Kotick bought a 25% stake at Activision. He became CEO of the company just a year later; and in another four years, International Consumer Technologies would become a full subsidiary of Activision.

We mentioned earlier how Kotick has been CEO of Activision for a long time now. It’s worth mentioning here again and officially. As of 2017, Kotick was named the longest running head of any publicly traded tech company according to Fortune. The Activision Blizzard merger happened in 2008 under his watch. The company has flourished under Kotick’s tenure, and it’s implementing techniques in order to remain fresh in the industry even after decades of being in operation.

In 2018, Kotick made about $28.6 million in compensation. The video game industry is larger than ever, but Kotick remains to get criticized for his annual salary. As You Sow, a nonprofit organization that promotes corporal social responsibility, ranked Kotick as the 45th most overpaid CEO’s in the United States The report stated that Kotick’s salary was 306 times more than the average Activision Blizzard employee.

In 2011, Kotick had a cameo role in the 2011 film, Moneyball. The movie starred Brad Pitt and was about the true story of Oakland A’s general manager Billy Beane. Beane was the first to use computer-generated analysis in the acquisition of new baseball players. Kotick’s 17-second cameo was all for charity. Kotick happens to be close friends with the film’s director Bennet Miller. When Miller asked Kotick to appear in the film, Kotick only agreed under the condition that Miller would make a movie for Kotick’s charity, the Call of Duty Endowment.

Kotick’s mother calls her son a compulsive capitalist, and she claims that he’s been that way since he was a toddler. Kotick made his earliest profit after selling his mother’s ashtray to her friend for $3. In high school, Kotick had a business venture doing parties for underage teens. He was just a teenager himself at the time. He hustled as a teenager and he made money because of it. Of course, Kotick saved every single dime he made, and he claims that he has the money still to this day.

We already know that Kotick makes a lot of money. We also know that he’s been making money since he was a kid, and he’s been saving all his money from that time until now. It shouldn’t be a surprise then to hear that Kotick’s net worth as of 2016 is at $7 billion dollars. That’s the kind of money anyone can make with a little hustle and a lot of brains.

The Call of Duty Endowment (CODE) is a charity that Kotick set up, as we mentioned earlier. The non-profit organization seeks to support and help unemployed veterans with establishing a career after military service. We all know that many of our veterans struggle with finding work and adjusting to every day life after serving in the military and maybe even going through traumatic events. The endowment was established in 2009 and has since helped thousands of veterans get back to work. CODE is probably one of Kotick’s most important projects, and it only takes a $522 donation to get a veteran back to his or her feet.