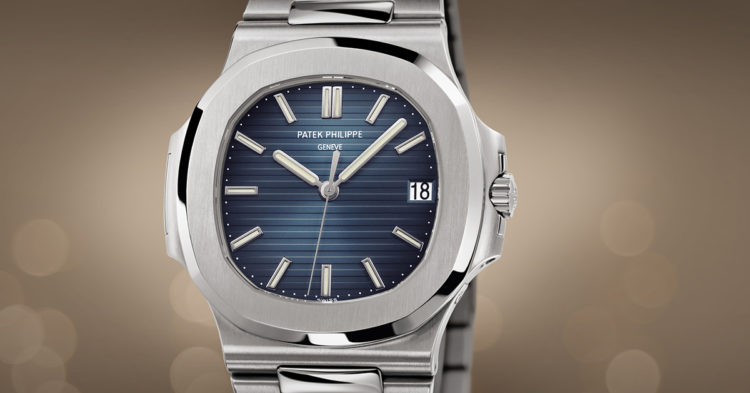 Since 1839, Patek Philippe has been pumping out one fine watch after another. Its vast collection now spans 160 watches and over 40 in-house movements, many of which are considered the best in the world. But in every collection, no matter how good, there’s always a star… one piece, in particular, that makes every collector go a little weak at the knees. Meet the Nautilus, a 1970s icon that proved Patek Philippe could turn its hand to more than just dress watches. 44 years after making its splashy entrance on the sports watch market, the Nautilus is still one of the most talked-about series in the brand’s collection – and one of the most desirable. With some models in the series costing more than the average house, and with waiting lists so long as to be almost biblical, this isn’t a watch for the impatient, the time-poor, or frankly speaking, the cash-strapped. But if you care more about your style than your savings account and if don’t mind hanging around a waiting list for a while, then you’re not going to be disappointed with the result. As with any series that’s been around for the best part of half a century, there’s more than one model to choose from. So, which Nautilus model is the right fit for you? Which piece is going to be worth blowing the budget on? If you want our advice, you won’t go wrong with any of these five pieces. 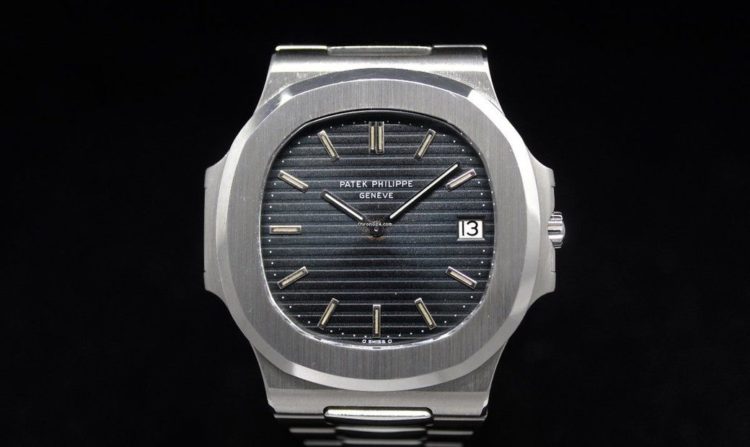 The first in a series isn’t always the best. In a lot of cases, it’s actually the worst. Watches, like fine wines, usually get better with age. But for every rule, there’s an exception. In this case, the exception is the 3700. Launched in 1976, its creation marked Patek Philippe’s first attempt at a sports watch. As first efforts go, it was incredible. Even more incredible was the fact its designer, Gerald Genta, came up with its design in 5 minutes flat. “I was at the restaurant of a hotel and some people from Patek were sitting in one corner of the dining hall, while I was sitting alone in the other corner,” he’s since recalled via timeandwatches.com. “I told the head-waiter: “Bring me a piece of paper and a pencil, I want to design something” and I designed the Nautilus while observing the people from Patek eating! It was a sketch that I completed in 5 minutes”. Strangely, it took the buying public a while to come around to the genius of Genta’s creation. At the time of its initial release, it was seen as too big, too expensive, and too experimental for popular tastes. In the end, of course, Patek Philippe got the last laugh. The 3700 is now one of the most sought-after vintage watches in the world, fetching the kind of price tag at auction that would make even Genta do a double-take. 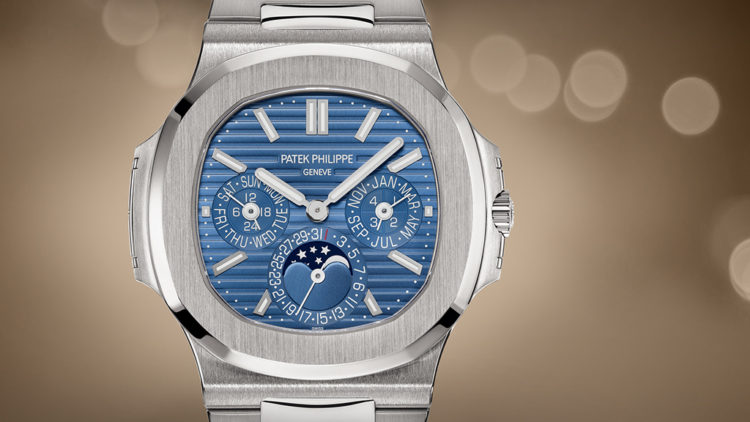 If you thought only vintage designs were worth collecting, you obviously haven’t been introduced to the Nautilus 5740. First presented at Baselworld 2018, it’s proof that the Nautilus is as relevant today as it was in the 1970s. Living up to Patek Philippe’s reputation for creativity and complexity, the 5740 is about as complicated (and expensive) as the current catalog gets, bearing a price point that will make your heart break and an aesthetic that’ll do the same. Made from white gold and featuring a svelte case, an ultra-thin self-winding caliber 240 Q movement, and a glossy blue dial, it’s a piece that, as the official Patek Philippe website rightfully says, offers a ‘distinctive blend of sports appeal and technical sophistication.’ 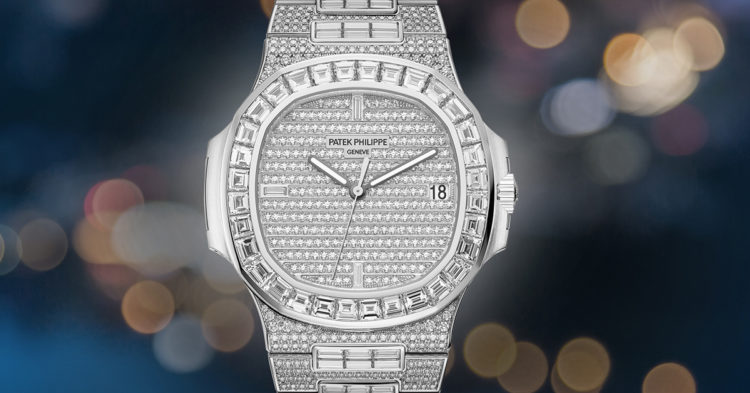 Diamonds might be a girl’s best friend in Marilyn Monroe’s mind, but in Patek Philippe’s world, diamonds are for girls AND boys. With more jewels than a tiara, the unisex 5710 is almost reckless with its lavishness… some might say to the cost of an otherwise perfectly tasteful watch. But those people are spoilsports. No, it’s not refined and it’s certainly not going to win any prizes for understatement. But it does make your heart skip a beat. On the case, you’ll find 100 0.69 ct diamonds and 32 5.51 ct baguette diamonds. On the dial, you’re treated to 255 1.36 ct diamonds and 3 0.01 ct baguette diamond hour markers. The bracelet, meanwhile, boasts 803 3.55 ct diamonds and 150 7.52 ct baguette diamonds. Add them all up, and you’re looking at a watch that has 1,343 diamonds in total. Now, it doesn’t take a math’s whizz to see that’s a lot of diamonds. And it doesn’t take a diamond smuggler to know a watch with that many diamonds is going to fetch a pretty price on the market. And sure enough, the 5719 is as about as expensive as a watch can get. But is it worth it? Ask the thousands of people who’ve been stuck on a waiting list for the past ten years and you’ll soon get your answer. 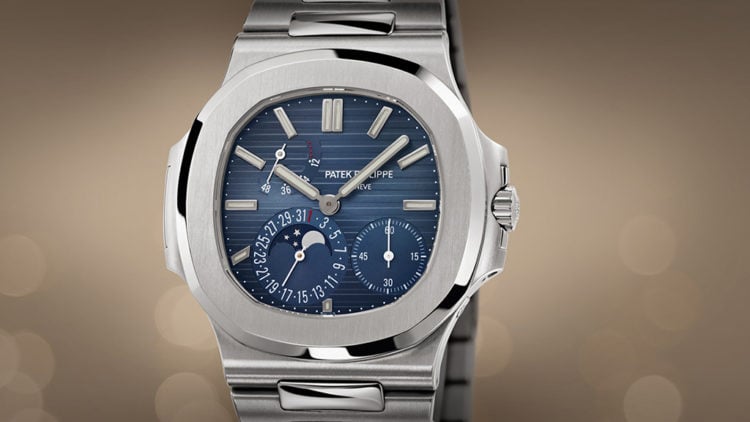 If you thought sports watches couldn’t be glam, then prepare to have your mind blown by the gorgeously elegant Patek Philippe Nautilus 5712R. With the iconic octagonal shape of its bezel, the legendary porthole construction of its case, and the classic horizontally embossed dial, it’s got all the features you’d expect of a Nautilus. Thanks to its graduated black-brown dial, its gold applied hour markers, its glossy rose gold case, and its matte dark brown alligator, it’s also got the good looks of a supermodel. If you’re not a fan of rose gold but still want a piece of the 5712’s killer movement and handsome aesthetics, you’ll be pleased to know it also comes in stainless steel or white gold options.

You can’t talk about the Nautilus without mentioning the 5711/ 1A. Well, you can, but no watch collector will ever forgive you. The 5711/ 1A is the bee’s knees, the icing on the cake, the cherry on top, the cream of the crop. Basically, it’s a very, very good watch. Some might even say the best. Thewatchlounge.com calls it ‘the world’s most desirable steel luxury sports watch.’ So desirable is it, in fact, waiting lists at official boutiques and authorized retailers are anything between 8 – 12 years. That’s a long time, whichever way you look at it. So, what makes people willing to hang around so long for a watch when there’s a million and one other pieces available to buy and take home now? Because simply put, the 5711/ 1A isn’t like other watches. With its distinctive porthole-shaped 40mm case, its uncluttered dial, and it’s sapphire caseback, it’s a thing of rare beauty. And as for functionality… well, no one’s going to complain about the innovative movement with its four-spoke Gyromax balance wheel, its slotted poising weights, its Spiromax balance-spring in Silinvar, its 21K gold central rotor, or its 45-hour power reserve. If you want our advice, get your name on that list, asap.