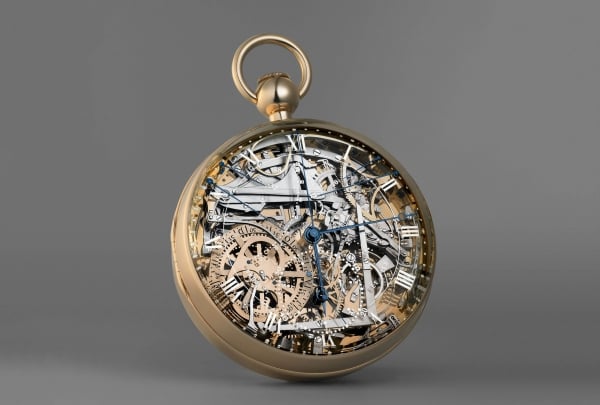 Nothing says old world vanity like a historical figure like Marie Antoinette. Everything we know about Marie Antoinette signifies excess, but at the same time, she’s also a figure of fashion and elegance. Breguet’s Grand Complication Marie-Antoinette is symbolic of that era’s royalty, and the history of the watch is evidence of it all. This is a watch that has been around for over 100 years, but its history predates the creation of this amazing timepiece.

Breguet started creating significant timepieces in 1775, and not too long after Abraham Louis Breguet opened for business, the watchmaker got an extraordinary order for one watch. According to Breguet, the order came in 1783 from an admirer of Marie Antoinette herself. This enigmatic admirer wanted to gift the queen with a unique timepiece from Breguet. The requirements for the watch were extensive. It had to have been the best the company could ever make. The watch had to have as much gold as possible; the admirer even wanted the mechanisms to be made out of gold. The queen’s watch simply had to be as spectacular as possible. There were no limits in regards to cost whatsoever.

The result was a pocket watch that became known as Marie Antoinette No. 160 or The Queen. Unfortunately, history tells us that watch No. 160 never made it to the queen. The queen never even laid eyes on the timepiece. It took Breguet 44 years to finish this one of a kind pocket watch. But at that point, the watchmaker was already 34 years too late. Marie Antoinette had already passed. As a matter of fact, Breguet himself never even got to see the final product because he died 4 years before it was finished. His son was the one that put the finishing touches on the pocket watch in 1827. The watch was passed on from one collector to another before it was bequeathed in 1925 to what would be its home for a long time, a museum in Jerusalem.

As you can imagine, the watch has haunted many watch aficionados since its creation—almost two centuries ago now. Many people have obsessed about this watch over the years. It was the ultimate timepiece. It was priceless and completely complex in its make. It was a watch that was definitely ahead of its time. On April 15, 1983—an otherwise ordinary night—a thief broke into the L.A. Mayer Museum for Islamic Art in Jerusalem. The same man left just before 10:30am the following morning with a remarkable amount of valuables from the museum including half of the museum’s watch collection at the time. That included the original Breguet Marie Antoinette No. 160. The man was infamous thief Na’aman Diller, who will forever be remembered for his atrocious act of thievery that night in 1983.

Diller stole a lot of Breguets that night, but the Marie Antoinette pocket watch was something else entirely. Diller could’ve never sold the watch in the open market because the watch was too famous; it had too much of a known history. But apart from the history associated with the watch, this particular Breguet is coveted because of the way it was made altogether.

Considering that Breguet took his time to perfect this timepiece, you could only expect that this particular creation was something truly extraordinary. This Marie Antoinette watch was almost like a grand cathedral clock that could fit in your pocket. It was majestic yet delicate at the same time. The thin hands of the watch flow effortlessly as if in a dance inside the watch. There are also a couple of unusual hands that add personality to match its benefactor’s. One hand moves along the face as the hour is struck, while another hand could be controlled to move and stop as desired. Those are peculiar characteristics that make this watch even more unique than it already is.

In addition, Breguet also decided to cover the case with a clear crystal lens, so you can see all the handmade and complex gears working together to make this pocket watch tick. It’s a mesmerizing sight, especially since the majority of the gears were made with 24k yellow gold. The casing was also cast in yellow gold, and its appeal and mystery only increased with time and age. The Queen also featured a perpetual calendar, a metallic thermometer, and even an elegant mechanism that chimed the hour. It was Breguet’s legacy. Marie Antoinette was the ultimate product of Breguet’s unrivaled skill as a watchmaker. The pocket watch was a curious piece of history that was lost in 1983.

The fascination for the watch never really went away, especially for watch aficionados, collectors, and watchmakers. In 2004, one watchmaker—Nicolas Hayek of Swatch—wanted to create a replica of the Queen. It was an intricate task that involved a ton of research on the part of Hayek’s company. Just a few years later, the original Marie Antoinette Breguet was rediscovered. It was 2007, and an anonymous American woman wanted to return the Queento its rightful owners. That woman happened to have been Diller’s wife. Diller ended up settling down in Los Angeles after his infamous 1983 heist. On his deathbed, Diller confessed to his wife that he had stolen a number of precious and important timepieces.

At the end of the story, the Breguet Grande Complication Marie Antoinette was returned to the L.A. Mayer Institute for Islamic Art. The watch today is valued at $30 million USD—an astounding price for an unbelievable piece of work. This was Breguet’s masterpiece; but without the initial order from Marie Antoinette’s admirer, this watch wouldn’t exist. There are rumors circulating today that it was Hans Axel von Fersten, a Swedish Count, who ordered the creation of the timepiece for the Queen. The two met when they were only 18 years and were rumored to be lovers. No matter how stunning this Breguet pocket watch is, there’s truly no price behind the fascinating story it continues to tell.